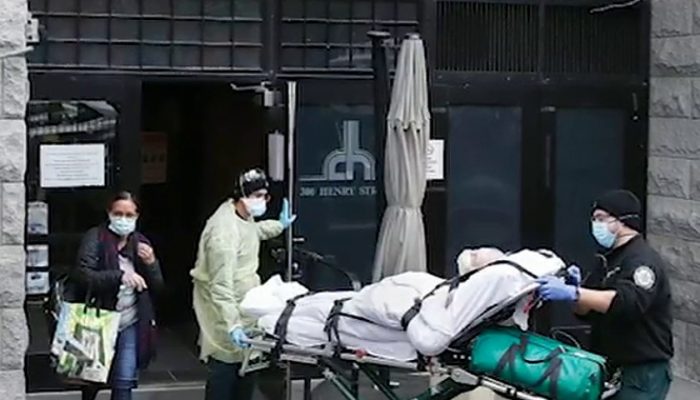 Even as America rushes to safeguard its most vulnerable during the coronavirus pandemic, explosive outbreaks of the infectious disease have led to mounting deaths at nursing homes and elder care centers across the country.

In Texas, where the COVID-19 virus has sickened at least 26,357 people and killed 690 as of Tuesday, more than 40 percent of virus-related deaths are linked to such facilities, according to a Houston Chronicle review of state data.

Nursing homes were connected to 33 percent, or 227, of those deaths, with 9 percent, or 62 deaths, related to assisted living facilities, according to the paper. It represented a spike of more than 10 percent from two weeks ago.

Gov. Greg Abbott said Monday that despite easing restrictions on some businesses to restore the economy, protections will remain in place at nursing homes and elder care centers.

“That includes things like better infectious disease protocols at senior living centers. The bottom line is this: The more we do to protect our vulnerable senior population, the faster we can safely open business in Texas,” said Abbott, promising to “redouble our efforts to protect seniors.”

Long-term care facilities across the country also have faced the tragic impact of the virus – more fatal for people who are older.

A deadly outbreak at an elder care facility in Massachusetts killed at least 80 veterans as of Wednesday, with more than 150 other veterans and employees testing positive. A new fatality is reported there almost every day.

“It’s horrific,” said Edward Lapointe, whose father-in-law lives at the Holyoke Soldiers’ Home and had a mild case of the virus. “These guys never had a chance.”

The virus ravaged another long-term home for veterans on Long Island, N.Y., last week, killing 46 vets and sickening 51 others.

Nursing homes have struggled under the mounting death toll, with police in New Jersey saying they found 17 bodies piled up in a tiny morgue inside a long-term care facility after receiving an anonymous tip earlier this month.

“They were just overwhelmed by the amount of people who were expiring,” Andover Police Chief Eric Danielson told The New York Times.

In Florida, there have been 2,547 coronavirus cases across 411 long-term care facilities, according to the state’s health department. On March 22, there were 30 such cases. Florida doesn’t track deaths in such facilities.

North Carolina has reported 48 ongoing outbreaks at nursing homes as of Tuesday, with 149 deaths – 43 percent of the state’s virus-related fatalities.

The death rate at long-term care facilities in the 23 states that publicly report such data is 27 percent, or over 10,000 reported deaths among residents and staff, according to the Kaiser Family Foundation, a non-profit organization focusing on national health issues.

The high rates might be a result of higher rates of testing in long-term facilities than in the general public, the organization said.

However, there is currently no official count of nursing home deaths across the country.

The federal government only recently required the nation’s more than 15,000 nursing homes to start reporting numbers of confirmed and presumed deaths, and infections. It is not yet clear when that count will be published.

About the Author: Stephen Sorace