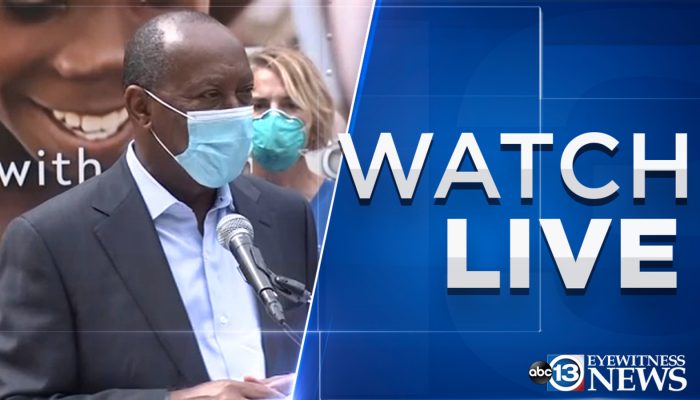 HOUSTON, Texas (KTRK) — During Friday’s briefing on the city’s COVID-19 response, Mayor Sylvester Turner announced the first COVID-19 death in the City of Houston with no underlying health issues.

Turner said the individual was a white man in his 70s who died on April 12.

The city of Houston is now reporting an additional 74 new cases, bringing the total to 3,120. The death toll climbed to 35.

Turner also briefly spoke about the city’s budget deficit due to COVID-19. He said Houston’s deficit would be between $170 and $200 million, including a sales tax reduction of $100 million.

“It would be the worst deficit that the city has faced,” Turner said. “This one will be worse than the city’s deficit in 2016.”

He also added that the city of Houston will not be able to use the U.S. Treasury Aid to fill the deficit, meaning thousands of employees will be furloughed with the new budget, and all five Houston Police Department cadet classes will also be deferred.

Turner said when thinking about reopening the economy and extending the “Stay-At-Home” order in the county, those issues are in the hands of the governor.

“His order will supersede the order of local government. My only hope is that whatever those orders will be, that they will be very careful and measured so we don’t cause this situation to resurge,” Turner said.

On Thursday, Turner announced the launch of his “Mask Up” campaign as a way to encourage people to wear a mask.

“I want to give masks and not citations,” said Turner.

“Hopefully everyone out there gets to wear their mask,” said a cheerful Biles via a video call. Correa added to that sentiment saying, “We want baseball back. We want everything back to normal.”

Addressing the enforcement aspect, the mayor said the mandate is to keep people healthy and not to fine or arrest anyone without masks in public. He insisted Houston police officers don’t want to cite people. Rather, they want to give you a mask, he added.

As far as the coronavirus’ impact on the city, Turner has not had to report a new COVID-19 death over the past four days.