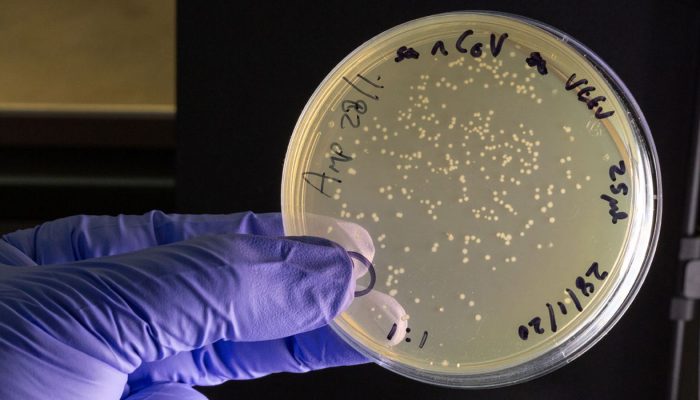 Human trials of a vaccine against coronavirus have started in Britain.

Scientists at the University of Oxford say a COVID-19 jab they are developing has an 80% chance of success.

Health Secretary Matt Hancock has said the Oxford trial – and another at Imperial College London – will each get at least another £20m of public money.

Image:
An Oxford University scientist with some of the vaccine doses

An urgent appeal has been issued for volunteers to take part – with those who do so being offered up to £625. People coming forward must be aged 18 to 55 and in good health.

Professor Sarah Gilbert, from the Jenner Institute team at Oxford, told Sky News the time it will take to determine if the vaccine is effective is “heavily dependent” on how much virus transmission there is in the community.

If the volunteers do not come into contact with the virus, researchers cannot test if the vaccine has protected them.

“If there’s very low virus transmission in amongst all the volunteers that we’ve vaccinated, we just have to wait a long time to get the result,” Prof Gilbert said.

“So we’re looking at trying to test healthcare workers, in hospitals, people who are more likely to be exposed, so that we can get this result more quickly.”

The Jenner Institute team at Oxford is starting production before the trial is complete and wants to have about a million doses ready to be sent out by September.

“We really don’t want to find ourselves in a situation where the vaccine can show it’s safe, it gives strong immune responses and it protects people, but we haven’t got any doses to vaccinate anyone else with,” Prof Gilbert said.

Andrew Pollard, professor of infection and immunity at the University of Oxford, said producing very large numbers of doses is a “big technical hurdle” that is “not achievable within six months and may not be achievable within a year”.

But he added that for “smaller scale it could be possible with an effective vaccine to get there rather sooner”.

The Oxford vaccine, called ChAdOx1 nCoV-19, is made from a harmless chimpanzee virus that has been genetically engineered to carry part of the coronavirus.

The technique has already been shown to generate strong immune responses in other diseases.

Deals have been done with three UK manufacturers, and several more abroad, to make the vaccine.

Prof Gilbert said she hoped “up to 500 people” would be part of the trial by the middle of May.

She said it would be a “randomised control trial” and half of the people would get a different vaccine.

“We will be monitoring them asking them to contact us if they have any symptoms of coronavirus and then we will find out who is getting infected,” she added.

The trial will involve healthy volunteers and take place in Oxford and Southampton, with three other sites to be added later.

‘I am throwing everything at it’ – Matt Hancock

Meanwhile, the Imperial College London team has been testing its vaccine on animals since February and clinical trials are expected to start in June.

Mr Hancock said developing a vaccine is an “uncertain science” but that the two teams were making “rapid progress” and would be backed “to the hilt”.

He said: “At the same time we’ll invest in manufacturing capability so if either of these vaccines safely works then we can make it available for the British people as soon as humanely possible.”

However, he cautioned that “nothing about this process is certain”.

More than 70 vaccines are in development around the world but – alongside the US and China – the UK is one of the few involved in human trials.