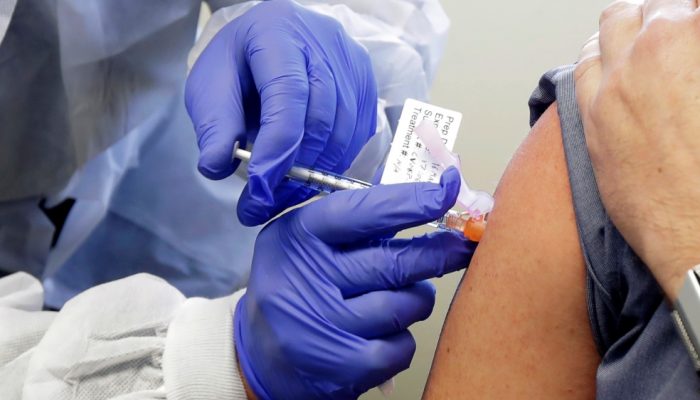 An initiative has attracted more than 1,700 volunteers who say they would be willing to intentionally be infected with the coronavirus as part of a controversial testing method that advocates say could speed the development of a vaccine.

The group, 1Day Sooner, says 1,754 people have signed up as volunteers for a so-called human challenge trials as of Thursday, according to its website.

Advocates say the trials could vastly speed up development of a cure compared to a more standard approach, in which a large population is given potential vaccines or placebos and left to regular environmental exposures over a prolonged period, after which the rate of infections are compared.

Although the human challenge trials would be voluntary, questions remain about the ethics of infecting individuals, even those believed to be at the lowest risk, with a virus that scientists have an incomplete understanding of, and that has proven deadly for some while only causing mild symptoms for others.

In early March, the World Health Organization (WHO) said the global death rate for coronavirus was 3.4 percent, but countries and studies have since reported rates that vary greatly, largely depending on how widespread testing has been and the strength of healthcare systems.

The vast majority of those who die from the disease caused by the virus, COVID-19, which has killed 183,000 worldwide with 2.6 million infections, are elderly or have pre-existing conditions.

The group’s cofounder, Josh Morrison, has said the initiative is not recruiting for a specific trial. The group says it is not affiliated with any companies currently developing vaccines or treatments, but is meant to create a pool of volunteers if the need arises.

“We want to recruit as many people as possible who want to do this, and prequalify them as likely to be able to participate in challenge trials should they occur,” Morrison, who also serves as executive director of organ-donation advocacy group Waitlist Zero, told Nature magazine.

“At the same time, we feel that the public policy decisions around challenge trials will be better informed if they highlight the voice of people interested in participating in such trials.”

Human challenge trials are currently used in the study of some other infectious diseases, usually those considered less deadly and with more solid foundational understandings, including malaria.

Why does vaccine testing take so long?

Standard vaccine testing is a lengthy process that typically begins with preclinical testing, often on animals, before moving to humans.

The WHO, according to its Draft landscape of COVID-19 candidate vaccines, reports as of Thursday at least six potential vaccines have moved into the clinical testing phase. At least 77 are still in the preclinical phase.

A pharmacist gives Jennifer Haller, left, the first shot of the first potential vaccine for the new coronavirus to be tested on humans on March 16 in Seattle [Ted S Warren/AP]

Standard human testing is typically composed of three phases: Initial small-group testing, usually involving about 100 participants, that assesses whether the vaccine is safe for humans; then a second phase that can last several months to several years, which involves several hundred subjects to evaluate the efficacy of the vaccine against the disease.

Finally, in the third phase, thousands of people, often across several medical facilities, are tested to further assess the efficacy of the vaccine over a defined period. This phase can also last several years.

Experts generally agree that a widely available vaccine for the coronavirus, SARS-CoV-2, would take at least a year to a year and a half to develop. Some have suggested even that timeline is optimistic, while at least one team has said, with ideal conditions, their vaccine could be ready by the fall of 2020.

In a paper published in the Journal of Infectious Diseases at the end of March, bio-ethicist Nir Eyal and epidemiologists Marc Lipsitch and Peter G Smith argue that replacing the final phase of typical human testing with human challenge testing “may subtract many months from the licensure process, making efficacious vaccines available more quickly”.


What if a COVID-19 treatment could be ready within weeks?

They argue that the risk borne by volunteers, some of whom would be given vaccines and other placebos in their theoretical study framework, is acceptable if they consent with a full understanding and those conducting the studies take all necessary precautions. That includes using volunteers who have been assessed to have a low risk of serious complications and who come from populations where the chance of natural infection is high.

Volunteers would also be closely monitored and given first access to limited life-saving equipment if symptoms warranted.

The authors likened the risk taken by volunteers “for others’ direct gain” as similar to those society asks volunteer firefighters to take every time they go into a burning building or the risk taken by those who donate organs to loved ones.

“Obviously, challenging volunteers with this live virus risks inducing severe disease and possibly even death,” the trio wrote in the paper’s abstract. “However, we argue that such studies, by accelerating vaccine evaluation, could reduce the global burden of coronavirus-related mortality and morbidity.”

The authors also note that potential vaccines that are harmful in themselves, such as past vaccines for MERS and SARS that may have caused more severe diseases in the animals infected during preclinical testing, would likely be ruled out before reaching the human testing phase.

More recently, on Tuesday, Stanley Plotkin, a disease expert at the University of Pennsylvania, and Arthur Caplan, a bioethicist at New York University released an outline for a human challenge coronavirus trial in the journal Vaccine.

Questions also remain over whether federal drug agencies, in the US and across the world, would approve a vaccine tested through this method.

In a letter to the US Department of Health and Human Services Secretary Alex Azar and the Food and Drug Administration Commissioner Stephen Hahn this week, 35 legislators urged the officials to adopt “expedited procedures for testing, approval and use of COVID-19 vaccines”.

The letter specifically called for health officials to consider human challenge testing, among other expediting methods.


COVID-19 vaccine could be ready in 12-18 months: US top scientist Fauci

“This consideration must rest on a rational analysis of the risk/benefit ratio, based on the best available science, and be free of political interference,” the letter said.

Others have urged caution, with Seema Shah, professor of medical ethics at Northwestern University Medical School, who has written about the ethics of human challenge trials, telling the Vox news site in early April that for human challenge trials to have a justifiable benefit, they must be conducted with complete coordination between researchers, the different teams conducting trials and federal regulators.

Several “justice considerations,” including whether the risks are fairly distributed, must also be considered, she told the news site.

“We’re all looking for a Hail Mary, and it’s easy to see challenge studies as exciting and having a lot of promise,” Shah said. “But a lot of things need to fall into place to achieve that promise.”