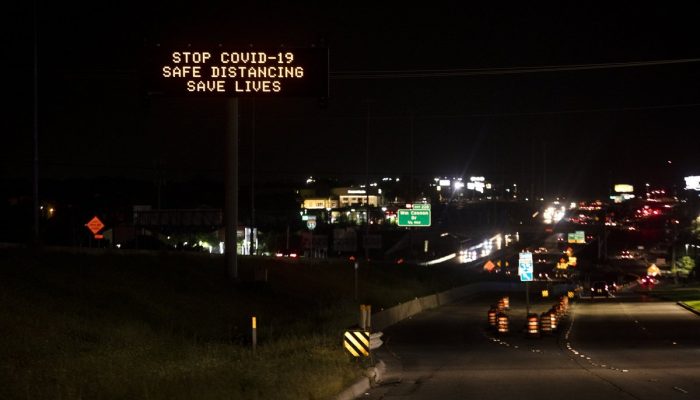 Lehrmann and her husband, Greg, who also tested positive for the virus, got tested at one of Austin’s drive-thru testing centers last week after experiencing fevers and body aches, the News reports.

Lehrmann called her infection “perplexing” since she and her husband “strictly adhered” to stay-at-home orders since early March. The pair have been working from home and wearing masks and gloves when they venture out to the grocery store.

“We were just extremely careful — and then we get it,” Lehrmann told the News. “How in the world would that happen? We have no idea. All I know is it must be very contagious.” — Stacy Fernández

While indoor and outdoor pools can operate at 25% occupancy, the governor’s directives specifically say people should continue to avoid interactive amusement venues like water parks.

The Big Rivers Waterpark in New Caney will host up to 2,020 people daily through May. That’s almost 20% of its maximum capacity, said Monty Galland, CEO and developer for the park’s parent company, in a Facebook video.

“The purpose of that is to make sure it’s comfortable and everybody has plenty of space to practice social distancing,” Galland said.

Abbott has said the state is exploring ways to safely reopen amusement parks, specifically looking at how Disney is opening up its parks. Still, the governor has not provided a timeline yet for when such venues could reopen in Texas. — Stacy Fernández and Patrick Svitek

On Monday, Gov. Greg Abbott announced the latest phase of reopening the state’s economy. Child care centers were allowed to open Monday, and bars and bowling alleys — among other select businesses — are permitted to open their doors starting Friday.

But as some Texans return to work, it’ll likely take some time before the economy rebounds. Not all business owners are opting to reopen their doors, and many customers remain hesitant over whether it’s safe to return to restaurants, retail stores and other businesses.

The Texas Workforce Commission, which handles the state’s unemployment claims, voted Tuesday to phase out child care subsidies for low-income and essential workers. They will continue making payments for up to three months, but these workers can no longer apply to the subsidy program. — Clare Proctor

On Wednesday, the county began releasing the number of emergency room visits in local hospitals by people suspected to have COVID-19. The first day’s number was 409. And the trend line for that statistic has stayed relatively stable for at least the past two weeks, the newspaper reported. Similarly, the county reported 185 new cases Wednesday, down 40 from the day before and part of what the Morning News described as a continued decline.

“It’ll be a kind of happy story this week as the numbers seem to be going our way,” Jenkins told the newspaper in a meeting with its editorial board.

Jenkins and local officials had expressed a desire to keep the economy more closed until a steady decline in new cases occurred over at least two weeks. But the lack of an immediate spike has made him willing to reconsider his assumptions if current trends continue for a couple of weeks, he told the paper.

“We’re not stuck on some arbitrary political solution or static thing,” Jenkins said. “We’re listening to what the science tells us — they’re looking at a novel virus every day and reevaluating.”

But, Jenkins told the paper, he’s still worried about a potential resurgence in new cases this summer. — Matthew Watkins

[4:30 p.m. Wednesday] Texas reported 1,411 more cases of the new coronavirus Wednesday, an increase of about 3% over the previous day, bringing the total number of known cases to 51,323. Hall County reported its first case Wednesday; over 85% of the state’s 254 counties have reported at least one case.

Harris County has reported the most cases, 9,859, followed by Dallas County, which has reported 7,904 cases. See maps of the latest case numbers for each county and case rates per 1,000 residents.

As of Wednesday, 1,791 patients are known to be hospitalized in Texas. That’s an increase of 59 patients from Tuesday. At least 770,241 tests have been conducted. — Chris Essig

Disclosure: Facebook has been a financial supporter of The Texas Tribune, a nonprofit, nonpartisan news organization that is funded in part by donations from members, foundations and corporate sponsors. Financial supporters play no role in the Tribune’s journalism. Find a complete list of them here.