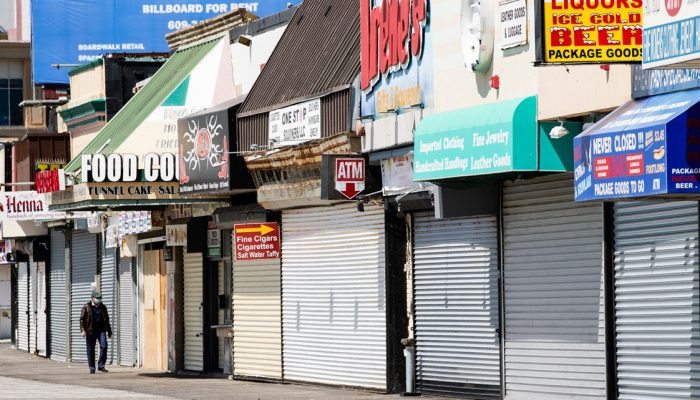 Here is a look at some of the latest news on COVID-19 from the U.S. and around the world on Wednesday.

WASHINGTON — President Trump is scheduled to have a roundtable discussion with industry leaders on the plan for reopening the country at 4 p.m. EDT. To view this live stream with closed captioning, click here.

This article contains ongoing U.S. and international updates on the COVID-19 pandemic and its effects. Here are some key updates for Wednesday, April 29, 2020. You can find more details by scrolling through the story.

Dr. Fauci says results from remdesivir study show drug can block the coronavirusPresident Trump said the federal government will not be extending its social distancing guidelines when they expire at the end of the month Thursday The federal government is giving out cleaning advice to schools and officesThe U.S. economy shrank at a 4.8% annual rate last quarterTrump said his administration is considering requiring travelers on certain incoming international flights to undergo temperature and virus checksA Houston medical diagnostic lab is now capable of running an FDA-approved test on thousands of blood samples for coronavirus antibodiesFrom Tuesday’s updates: U.S. passes 1 million confirmed cases

For most people, the coronavirus causes mild or moderate symptoms, such as fever and cough that clear up in two to three weeks. For some, especially older adults and people with existing health problems, it can cause more severe illness, including pneumonia.

President Donald Trump says the federal government will not be extending its social distancing guidelines when they expire Thursday at the end of the month.

Trump told reporters in the Oval Office that the coronavirus guidelines will be “fading out” because of work that governors are doing in their states.

Vice President Mike Pence said the guidelines issued 45 days ago have been incorporated into guidance provided to the states on how they can begin the process of gradually reopening their economies.

The guidelines – which were originally supposed to last 15 days and were then extended another 30 – included encouraging Americans to work from home and avoid restaurants and discretionary travel as well as telling older Americans and those with serious underlying health conditions to isolate themselves.

National Institute of Allergy and Infectious Diseases Director Dr. Anthony Fauci said at the White House on Wednesday that a study on the drug remdesivir shows that it “can block” the coronavirus.

Fauci’s remarks came Wednesday during an Oval Office meeting with President Donald Trump, the Coronavirus Task Force and Louisiana Governor John Bel Edwards. He added that the result was a strong “proof of concept” for the drug.

Fauci went on to say remdesivir had produced a minor improvement on deaths – 11% for the placebo arm of the study and 8% for those treated with remdesivir.

He cited a “31% improvement” with the drug, without providing details.

Remdesivir was invented by Gilead a decade ago and has shown promise against a variety of viruses in laboratory and animal experiments. If shown to prevent people from dying and being put on ventilators, it could give health officials and political leaders greater confidence as they seek to reopen the economy.

The NIAID study is the most rigorous test to date of the potential treatment because it is a double-blind, placebo-controlled trial, the gold standard for seeing if a drug is safe and effective.

A cohort of patients receive a dummy treatment instead of the real drug, without patients and treating doctors knowing which one the patients are getting. It provides the best comparison of how people treated with the drug fared in relation to those who did not get the drug.

Federal authorities are giving cleaning and disinfecting tips for schools and workplaces to help deal with the coronavirus.

The Environmental Protection Agency and Centers for Disease Control and Prevention released the cleaning guidelines Wednesday.

The guidelines urge Americans to draw up plans to clean areas with soap and water and disinfectant. Recommendations include ensuring custodians have proper protective gear.

Cleaning workplaces and schools will be part of reopening after weeks and months of lockdown from the outbreak. The shutdown has thrown tens of millions of Americans out of work and sent the U.S. economy plunging.

The Trump administration has vacillated between prodding states to reopen businesses and schools to get the economy going and urging caution to try to limit the spread.


US economy shrank at 4.8% rate last quarter as virus struck

The U.S. economy shrank at a 4.8% annual rate last quarter as the coronavirus pandemic shut down much of the country and began triggering a recession that will end the longest expansion on record.

The Commerce Department says the gross domestic product, the total output of goods and services, posted a quarterly drop for the first time in six years. Forecasters say the drop in the January-March quarter will be only a precursor of a far grimmer GDP report to come on the current April-June period, with business shutdowns and layoffs striking with devastating force.

The Congressional Budget Office has estimated that GDP will plunge this quarter at a 40% annual rate.

To keep passengers and crew safe from the coronavirus during flights, American Airlines has announced new guidelines.

In May, crews will distribute sanitizing wipes or gel and face masks to passengers while supplies last.

Flight attendants will also be required to wear face masks on all flights starting May 1.

Germany is extending its worldwide travel warning until mid-June, saying the coronavirus situation is too dire to change the guidance.

Foreign Minister Heiko Maas says the warning, due to expire May 3, would be extended to June 14 because there has been no change to the danger posed by the pandemic. Maas says he will discuss the matter with European partners in the coming weeks.

He says, “naturally we all hope we won’t need this travel warning after June 14.”

Among other things, the official warning means that Germans who had booked vacations for the dates can get refunds, another likely blow to the European travel industry.

The Italian sports minister says it is increasingly unlikely the soccer season will resume.

Italian Premier Giuseppe Conte announced Sunday that professional sports teams can resume training on May 18. That means Serie A could resume playing games in June.

He adds that he sees “the path to restarting Serie A getting ever narrower” and that if he was among the presidents of soccer teams “I would be thinking about next season.”

The French government called off the season in that country on Tuesday and Spadafora says that could push Italy to do the same.


With 14-day drop in cases requirement to reopen, no state has yet to meet it, report

Some states are already beginning to ease up on stay-at-home orders, but as NBC reports, there are no states yet that have met the federally recommended 14-day guidelines.

The guidelines from the federal government say that states should see declining cases over the course of 14 consecutive days before reopening and easing stay-at-home restrictions. Tuesday the United States hit the grim marker of 1 million cases. That’s a third of the world’s total cases.

South Korean infectious disease experts have downplayed concerns that patients could get reinfected with the new coronavirus after fully recovering.

While hundreds in South Korea have tested positive again after their release from hospitals, Oh Myoung-don, who heads the country’s central clinical committee on new infectious diseases, told a news conference on Wednesday there was a “high possibility” that such test results were flawed.

He said South Korea’s standard real-time PCR tests, designed to amplify the genetic materials of the virus so that even tiny quantities are detected, doesn’t reliably distinguish between remains of dead virus and infectious particles. He said lab tests on animals suggest that COVID-19 patients would maintain immunity for at least a year after their infections.

He also said it was unlikely that the virus could be reactivated after remaining dormant when it doesn’t seem to be a type that causes chronic illnesses.

President Donald Trump said his administration is considering requiring travelers on certain incoming international flights to undergo temperature and virus checks to help stop the spread of the coronavirus.

“We’re looking at doing it on the international flights coming out of areas that are heavily infected,” Trump said Tuesday at the White House. “We will be looking into that in the very near future.”

Trump said it has not been determined yet whether the federal government or the airlines would conduct the testing. “Maybe it’s a combination of both,” he said.

SynerGene Laboratories, a facility owned by Principle Health Systems, is offering a COVID-19 test developed by pharmaceuticals giant, Abbott Laboratories. It tests for antibodies for the novel coronavirus and can detect whether a person has been exposed.

What differentiates the test from other antibody screenings is that the Abbott Labs version is approved by the Food and Drug Administration, Principle Health Systems CEO James Dieter said Tuesday.

“There are a lot of tests on the market right now that are not, but Abbott did go through the painstaking process of getting FDA approval,” Dieter said.

The Abbott Labs test received “Emergency Use Authorization” by the FDA, an expedited approval that can be used during a public health crisis. The company said it plans to ship millions of tests to labs nationwide.

Dozens of blood tests are being marketed in the United States that are not entirely accurate or comparable to one another, according to a report released by researchers at Johns Hopkins University.

RELATED: VERIFY: Antibody tests versus COVID-19 tests. The pros and cons of both.


Streaming films eligible for Oscars, but for 1 year only

Movies that debuted on a streaming service without a theatrical run will be eligible for the Oscars, but only for this year.

The Academy of Motion Pictures Arts and Sciences on Tuesday announced the change for the 93rd Academy Awards as a response to how the coronavirus pandemic has impacted the film industry.

The film academy also says it will condense the two sound categories into one and prohibit DVD screeners for 2022’s 94th Oscars in an effort to become more carbon neutral. The release eligibility change means that films that debuted online could be considered for best picture and other Oscars.

About the Author: KENS