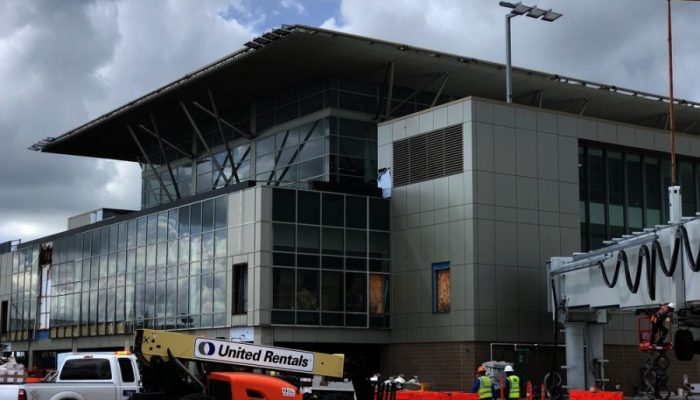 Austin-Bergstrom International Airport lost nearly all of its passenger flight usage in April as the region dealt with the coronavirus pandemic. (Jack Flagler/Community Impact Newspaper)

Numbers released June 9 by Austin Bergstrom International Airport show the airport lost nearly all of its passenger flight usage in April as the region and nation dealt with the coronavirus pandemic.

According to a June 9 news release from Austin-Bergstrom, the number of passengers flying out of its terminals in April this year plummeted by 96.6% as compared to April 2019. Just 47,781 passengers flew in and out of Austin’s airport this April. Last April, Austin-Bergstrom reported that more than 1.4 million passengers arrived and departed from the airport.

The reported passenger totals represent a second straight month of steep decline in traveler numbers for Austin-Bergstrom. In March, the airport reported just over 700,000 passengers flew in and out of Austin-Bergstrom, down by 52.11% year over year.

Austin-Bergstrom documents show the spring and summer months historically bring the most travelers through its gates every year. The airport reported its highest monthly amount of travelers ever—1.6 million—in July 2019.

If the airport’s March and April passenger reports are taken as predictors, the upcoming summer travel season’s passenger totals are likely to pale in comparison to years past, the release said.

According to Austin-Bergstrom’s June 9 news release, total passengers using the airport from January to April was down by 36% when compared to the same time period in 2019.

Austin-Bergstrom remains a giant contributor to Austin’s local economy, according to state figures. A 2018 economic impact study from the Texas Department of Transportation found that Austin-Bergstrom generated $7.6 billion in economic activity in 2017 and created or supported more than 74,000 jobs in the Austin area that year.

In contrast to the airport’s plummeting passenger totals, however, Austin-Bergstrom reported that total air cargo suffered at a lower rate. Total air cargo in April totaled 13.7 million pounds, down by just 11.5% as compared to April 2019, according to the news release.

Federal agencies have already moved to support airports during the economic downturn caused by the coronavirus pandemic. In April, Austin-Bergstrom received $58.7 million in federal aid from the Federal Aviation Administration to help fund operations and retain airport workers, according to a news release.

In total, Texas airports received $811.5 million in federal aid from the CARES Act passed by U.S. Congress in March. Austin-Bergstrom received the third-highest payout in the state, behind only Dallas-Fort Worth International Airport and Houston’s George Bush Intercontinental Airport.

About the Author: Iain Oldman