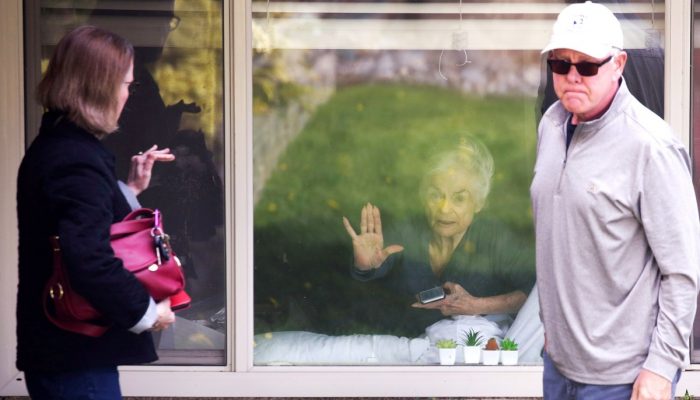 Judie Shape, 81, who tested positive for coronavirus, waves as her daughter Lori Spencer and husband Michael Spencer visit outside her room at the Care Center of Kirkland in Kirkland, Wash., March 17, 2020. (Jason Redmond/Reuters)

As states begin to adjust their lockdown policies, they should consider a more targeted approach that accounts for the outsized risk faced by nursing homes.

R
eports are rolling in about the role nursing homes play in the COVID-19 pandemic and the numbers are horrifying. In Minnesota, 73 percent of all COVID-19 deaths are related to nursing homes. In Massachusetts, the figure is 55 percent. More-systematic reporting and data-collection efforts have resulted in upward revisions in many states of the percentage of deaths associated with nursing homes. Connecticut significantly revised its estimate upward this week, concluding that over half of all coronavirus-related deaths in the state involved nursing home residents instead of its earlier estimate of one-third. Colorado this week announced that 64 percent of its COVID-19 deaths were in nursing homes, a stunning increase of 84 percent in just one week. In communities such as Kirkland, Washington, home of one of the country’s first virus outbreaks, virtually all of their COVID-19 deaths have been related to nursing homes.

The U.S. is not alone in experiencing nursing home trauma. A multi-country study published last week reinforces the emerging U.S. trend, finding 57 percent of the deaths in Canada and approximately half of all deaths in Europe from COVID-19 were related to nursing home patients, including 64 percent in Norway, 49 percent in hard-hit Belgium, and an estimated 53 percent of the total deaths in Spain.

The United States has responded to the pandemic like most countries throughout the Western world, by imposing a society-wide shutdown aimed at “flattening the curve” by shifting infections into the future to prevent the health care system from being overwhelmed by a surge of cases. The economic, social, and personal costs have been massive. Over 26 million Americans have lost their jobs in the past month, trillions of dollars of savings have been incinerated, GDP has plunged, the federal debt has exploded, and many small businesses have been shuttered and will never reopen. Aside from the economic carnage, depression, alcohol abuse, and domestic abuse have all soared during the lockdown period.

A more effective approach would protect our most vulnerable citizens and alleviate the burden on our health-care system while also minimizing the harm to society and the economy.

First, most obvious, we should invest resources where they will do the most good — reducing the harm sweeping through nursing homes. Nursing homes present unique challenges of both infection and mortality that bear little resemblance to the world outside their walls. High residential density, shared common spaces, and shared staff increases both the spread and intensity of infection. Once infection descends, the presence of an older population, many with multiple co-morbidities, raises the risk of mortality.

Nursing homes have already aggressively responded to the crisis by ramping up staff training, sanitation standards, use of personal protective equipment, and other precautions. But these precautions have driven up costs while revenues have fallen as a result of declining populations, driving many homes to the verge of bankruptcy. For a fraction of what the government is spending on unemployment benefits and trying to save small businesses from bankruptcy, it could support even more intensive and effective interventions, such as reducing residential density, eliminating shared rooms, and relocating more active residents to off-site apartments or more independent living facilities. Nursing homes also should receive priority access to testing resources. None of the useful steps that could help to protect nursing homes from greater harm requires shutting down the economy or eliminating anyone’s business or livelihood.

Even strategies designed to “flatten the curve” should begin by preventing mass outbreaks in nursing homes. Consider the city of Lombardy, Italy, the early warning sign that alerted the world to COVID-19’s potential for overwhelming a nation’s health-care system. According to news reports, up to 53 percent of recorded coronavirus-related deaths in Italy may have occurred in care homes and “the majority of the care home deaths have been in Lombardy.” As the experience in Lombardy suggests, focusing efforts on preventing future nursing-home outbreaks will go a long way toward protecting the health system from being overwhelmed while minimizing the impact on the general public.

Including nursing home deaths in overall COVID-19 data can paint a misleading picture of coronavirus risk if those figures are extrapolated and applied to the larger society. For example, researchers at Massachusetts General Hospital recently conducted antibody tests on 200 random members of the general public in Chelsea, Massachusetts. They found 32 percent of those tested had antibodies, which suggested that about 12,800 people in the city had been infected, of which 41 died, an infection fatality rate of about 0.3 percent. Yet of those 41 victims, 27 were residents of just two of the city’s nursing homes — accounting for approximately two-thirds of the city’s coronavirus-related deaths. Whatever the actual infection fatality rate turns out to be in the end (the study’s precise findings are subject to caveats), including nursing-home deaths in the overall assessment inflates the perceived risk of the virus to the public, including to the non-nursing-home elderly, and hinders our evaluation of the benefits and costs of policy interventions. The overrepresentation of nursing-home residents among Covid-19 victims might also impede our ability to assess the effects of general population lockdowns, as huge numbers of nursing-home deaths in many states could swamp any marginal benefit from restrictions on the general public.

Easing restrictions on the general public not only would reduce the costs of combating the virus’s toll, it might also have important benefits, most especially to vulnerable Americans. The “flattening the curve” strategy itself recognizes that quarantine restrictions mainly will delay but not eliminate the eventual spread of the virus through society. But this grim reality has benefits as well as costs — gradually building immunity among the general population may be the most effective way of protecting the vulnerable. Locking down society for the past month has not prevented nursing-home outbreaks and permanent isolation of nursing home residents from society will be neither feasible nor desirable. But even more important than building general immunity might be building specific immunity among particular low-risk individuals, who potentially could serve as a cohort of people who can safely come and go from nursing homes — including staff members, delivery drivers, and medical professionals — while minimizing the risk of future outbreaks.

Understanding the full scope of the nursing-home problem has been frustrated by a lack of comprehensive and consistent data. Last week the Centers for Medicare & Medicaid Services announced nursing homes will be required to start reporting data on Covid-19 cases directly to the Centers for Disease Control and Prevention, which should improve our understanding of the risks from the virus to both nursing home residents and the general public.

This is a welcome move. Recognizing the important role played by nursing homes will help us to better understand the real nature of the enemy, and to attack it with policies that provide the largest benefits at lower costs to our personal liberty and economic future.

About the Author: Theodore Kupfer