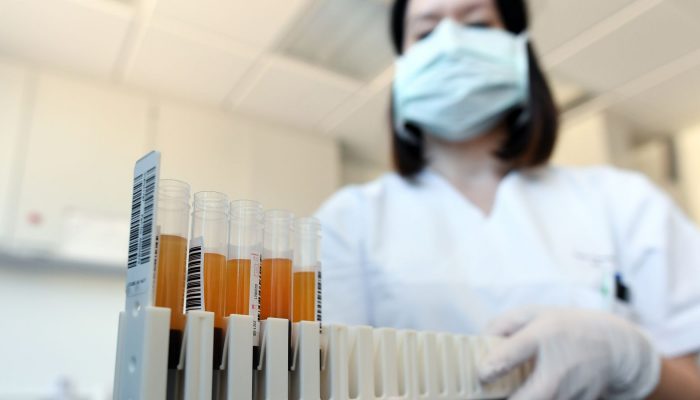 Plasma taken from the blood of recovered coronavirus patients could be used to help thousands of people battling the disease.

Approval has been given for a clinical trial of so-called convalescent plasma, which was used as an effective treatment during the 2003 outbreak of SARS (severe acute respiratory syndrome).

Image:
Blood is circulated through a machine that separates out the plasma

It sees plasma donated from the blood of people who have recovered from the illness, given to patients struggling to produce their own antibodies to fight the virus.

In parallel, the government is increasing the nationwide collection of plasma to enable its rapid roll-out if the treatment is shown to work.

The aim is to have enough plasma to treat 5,000 coronavirus patients a week.

Plasma is the largest single component of blood and is the liquid in which the red and white blood cells, and platelets are suspended.

Mr Hancock said: “The UK has world-leading life sciences and research sectors and I have every hope this treatment will be a major milestone in our fight against this disease.

“Hundreds of people are participating in national trials already for potential treatments and the scaling up of convalescent plasma collection means thousands could potentially benefit from it in the future.”

Professor Jonathan Van Tam, deputy chief medical officer, said: “The UK is leading the world’s largest trials to find a treatment for COVID-19, with over 7,000 people so far involved testing a range of medicines; we hope to add convalescent plasma to this list shortly.

“Convalescent plasma has been used as an effective treatment for emerging infections in the past, and this step forward underpins our science-backed approach to fighting this virus.”

Drones to be trialled for medical delivery

NHS Blood and Transplant will contact people in England who have recovered and may be able to donate, the Department of Health said.

People who have had a confirmed positive test result and who are willing to donate, can also provide their details through the NHS Blood and Transplant website at www.nhsbt.nhs.uk.

Blood is taken from one arm and circulated through a machine that separates out the plasma, and then returned to the donor.

The process takes about 45 minutes.