Home TexasCovidNews Coronavirus: The good news (and not so good news) about the chances of a COVID-19 vaccine | UK News 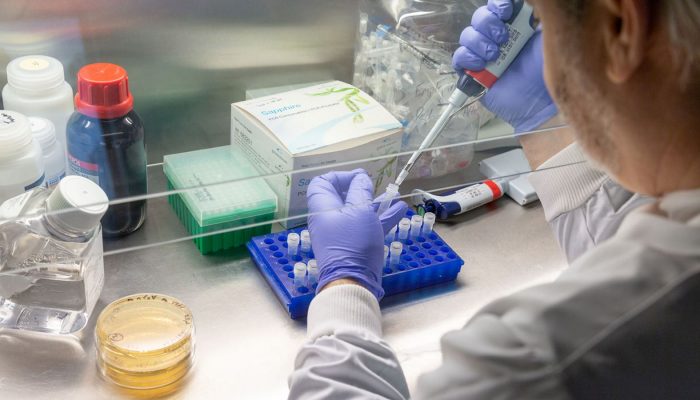 There’s good news and not so good news about the chances of a vaccine to beat COVID-19.

The good news is that there has probably never been a better time for mankind to need a new vaccine as the world fights the COVID-19 pandemic.

Firstly, exciting advances in biotech and other vaccine technologies mean scientists are optimistic about the prospects, and recent outbreaks like Ebola and SARS in China, have seen those advances put into action.

Image:
Around 100 companies, labs and groups of scientists are in the race to find a vaccine

The bad news is, the same as ever with vaccines – you can never know the unknowns ahead, what setbacks are likely to spring up and how much they will delay the process.

“Just imagine the situation if a vaccine is now being used, and there are reports of several adverse reactions”, veteran Israeli vaccine regulator Manfred Green told Sky News.

“And even if they are not clearly related to the vaccine, the public response will be immediate, and there’ll be very great reluctance on the part of the public to receive that vaccine,” he added.

A vaccine must be both effective and safe, and getting to that point can take years – and sometimes it never happens at all.

That said, there are good grounds to be optimistic.

There are as many as 100 different companies, labs, or groups of scientists in the race to find a vaccine.

The search for a COVID-19 vaccine

And there is a spirit of cooperation rarely seen in this world.

GlaxoSmithKline and Sanofi for instance – normally arch rivals – are teaming up to merge their efforts.

There is also a considerable variety of methods and technologies being applied.

There are the moonshot methods.

They sound great on paper and are based on the latest genetic and biotech advances, hoping to insinuate some of the genetic code of the virus into human cells to precipitate an immune response.

But they are so new that they are unproven in mass application.

Professor Trevor Drew heads the team at the Australian centre for disease preparedness, where the first two vaccines off the starter block are already undergoing animal trials.

One is from the US company Moderna, while the other is from the Oxford University team already carrying out human trials as well.

“These vaccines are very novel,” he said.

“There has never actually been one that has made it all the way to licensing, but they certainly have been demonstrated to induce parts of the immune system.”

He added: “So the question is, will they produce a sufficient level of stimulation, and is it to the right arm of the immune system so that it can protect the development of the disease.”

One vaccine that may not need animal trials is being developed in Israel.

There, scientists had already been studying coronavirus in chickens for years.

They hope they can convert that research into making a vaccine that can be applied orally to humans.

They, like others, are frustrated at the red tape and regulation that may delay the vaccine being approved for mass use.

Mr Drew continued: “I think that under these circumstances, we should consider again what is bureaucracy and what is essential to bring a safe and effective vaccine to the people and we hope that everybody will be reasonable as a community as a world and we’ll find a way.”

Africa’s Ebola outbreak showed that with an epidemic moving at wildfire speed, you can fast-track vaccine production and approval.

The hope is the same can happen now.

Instead of waiting for animal trials to finish, teams are running them at the same time as human trials, and authorities are promising to do what they can to shorten the time before vaccines can be approved and used en masse.

But there are just too many unknowns to say how much time can be saved, even before the long process of producing enough shots to vaccinate the world.