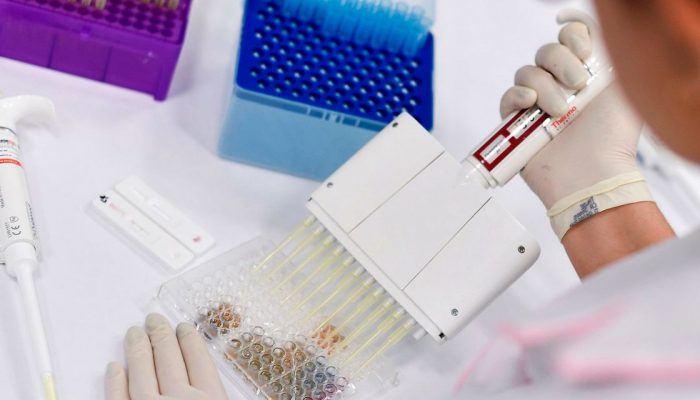 A vaccine will take time to develop. Therapeutics offer the possibility of a shorter-term answer.

Identifying a treatment for the novel coronavirus is perhaps the most vital scientific problem of the moment. While vaccines could bring an end to the pandemic, none is likely to be widely available for well over a year. Therapeutics offer the possibility of a shorter-term answer, one that could reduce the frightening death toll.

It is unlikely that scientists will find a silver bullet cure to the novel coronavirus. So drug companies and other labs are working on a range of approaches to give doctors a variety of tools. Some of the drugs seek to stop the virus itself; others only aim to treat the potentially deadly complications it can cause. The Milken Institute, which is tracking the various efforts, counts 176 possible treatments or efforts to discover a treatment. Here are some of the most important.

Remdesivir, a drug designed by
Gilead
(ticker: GILD) to treat Ebola, is the most-watched antiviral being tested. But a drip-drip of news about its effects has confounded observers. On April 23, Gilead shares fell after the World Health Organization accidentally posted a summary of a draft paper that seemed to report that the drug had no clinical benefit in Covid-19 patients, though the company said the summary mischaracterized the study. That came after the health-care news website STAT reported that patients at one hospital running remdesivir studies was seeing positive results. Gilead says it will release results on an open-label study of remdesivir in severe Covid-19 patients at the end of April, and data on an open-label study in moderate Covid-19 patients at the end of May. Also at the end of May, data is expected on a double-blind, controlled study of remdesivir being conducted by the National Institute of Allergy and Infectious Diseases.

Status: In human trials. The FDA has issued an Emergency Use Authorization to allow it to be used in certain Covid-19 patients.

These closely related antimalaria drugs have emerged as the most controversial potential Covid-19 treatments. Data supporting the efficacy of the drugs remains thin. On April 24, the Food and Drug Administration warned of heart problems in Covid-19 patients treated with the drugs, and said that they should be given only to Covid-19 patients participating in clinical trials or being treated in hospitals. Interest in the drugs has been tremendous, in part because of President Donald Trump’s touting of hydroxychloroquine’s potential in speeches and on
Twitter.
The FDA said on March 30 that it had put out an Emergency Use Authorization allowing hydroxychloroquine sulfate and chloroquine phosphate from the Strategic National Stockpile to be used in teen and adult patients hospitalized with Covid-19. The drugs remain the subject of dozens of clinical trials, often in combination with other medications.

Kevzara, an arthritis drug sold by
Sanofi
(SNY) and
Regeneron
(REGN), was being tested in two separate Phase 2/3 trials in hospitalized patients with severe Covid-19. The thinking was that the drug, a so-called IL-6 inhibitor, might be able to tamp down inflammation in the lungs that, in serious Covid-19 cases, can lead to death. On April 27, Regenron and Sanofi said the trial would continue only for the sickest patients. The companies said a preliminary analysis of Phase 2 data showed that Kevazara had no notable benefit, though there were positive trends among the sickest patients.

Status: In human trials. Chinese health officials recommend its use in some Covid-19 patients.

Actemra is a
Roche
(RHBBY) arthritis drug that, like Kevzara, is an IL-6 inhibitor. Like Kevzara, it is being studied for its potential to manage Covid-19 side effects in patients who develop pneumonia. China’s National Health Commission includes Actemra in its recommended Covid-19 treatment plan for patients with pneumonia. The April 27 data on Kevzara may diminish expectations for Actemra.

Kaletra, an HIV drug sold by
AbbVie
(ABBV), returned disappointing results in a Covid-19 trial in mid-March, but more trials are being conducted. The drug is a combination of two antivirals, called lopinavir and ritonavir, and first received FDA approval as an HIV treatment in 2000. AbbVie has decided not to enforce its patent on the drug, according to the Financial Times.

Status: Human trials set to start at the end of April.

Eli Lilly (LLY) said on April 13 that it planned to test its arthritis drug baricitinib in a National Institute of Allergy and Infectious Disease trial of seriously ill Covid-19 patients. Like the IL-6 inhibitors, baricitinib, a JAK inhibitor, is being examined under the hypothesis that it could reduce inflammation in the lungs. The company also says there is a secondary hypothesis that the drug could have an antiviral effect. The company expects the trial to begin at the end of April in hundreds of patients, with data expected two months later.

When the immune system conquers a virus, it creates proteins called antibodies that can identify and neutralize that virus if it turns up again. Various companies are working on identifying antibodies that can neutralize the virus that causes Covid-19, and turning those antibodies into a drug. Regeneron has identified hundreds of relevant antibodies from genetically modified mice, and from humans who have recovered from Covid-19. The company used the same technique to develop an Ebola drug. It says it will pick two of the antibodies to test as a cocktail treatment. It plans to begin manufacturing in April, and to start clinical trials in June.

Vir Biotechnology
(VIR) is working on a Covid-19 antibody therapy with GlaxoSmithKline (GSK). The company says the antibody it has identified can neutralize the virus that causes Covid-19 in tests in the lab. The companies said in early April that they could begin Phase 2 clinical trials of the drug within three to five months.

Vir is also working with the biotech firm
Alnylam Pharmaceuticals
(ALNY) to develop Covid-19 drugs that use a technique known as RNA interference to go after the virus. The drug would use molecules called small interfering RNA that could potentially stop messenger RNA molecules from carrying instructions to make disease-causing proteins. Alnylam has synthesized hundreds of siRNA molecules targeting the genomes of the virus that causes Covid-19. Vir will now evaluate those molecules in the lab.

About the Author: Josh Nathan-Kazis