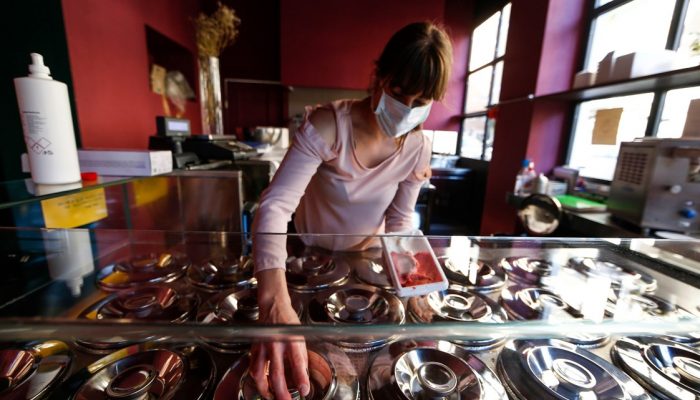 
JEFFERSON COUNTY, Texas — This article contains ongoing U.S. and international updates on the COVID-19 pandemic and its effects. Here are some key updates for Sunday, May 3, 2020. You can find more details by scrolling through the story.

Swedish drug regulator agency investigating on a rapid schedule if the drug remdesivir should be used to treat COVID-19Small Oklahoma town amends rule requiring face masks in businesses after receiving reports of threats of violence against workers trying to enforce the rule.  Look back at the Saturday, May 2, blog at this link.

There were more than 1.1 million confirmed cases of COVID-19 in the U.S. by Sunday, according to Johns Hopkins University. Over 60,000 people in the United States have died.

Worldwide, over 3.4 million cases of COVID-19 have been confirmed. More than 244,000 people have died around the globe.

For most, the coronavirus causes mild or moderate symptoms, such as fever and cough that clear up in two to three weeks. For some, especially older adults and people with existing health problems, it can cause more severe illness, including pneumonia and death. The vast majority of people recover.

Latest updates:
Here are the latest updates from around Southeast Texas, Texas, Louisiana and some from the world (all times are local Central Daylight Time)

May 3, 2 p.m. — Dallas County’s death toll now sits at 111 people for the county, with 4,133 total cases reported so far. A Dallas woman in her 70s who had been critically ill at a local hospital was the latest victim.

It’s the biggest single-day increase in new cases the county has seen so far, and that’s coming off of a record-setting week when the county saw its number of reported number of cases nearly double.

May 3, 12:41 p.m. — The number of Texans who have recovered from the coronavirus has exceeded the amount of active cases in the state for two straight days, Gov. Greg Abbott tweeted.

The Texas Department of State Health Services reports an estimated 15,544 individuals have recovered as of Sunday. Texas ranks third among U.S. states with the highest recovery numbers.

The Swedish national drug and medicine supervision agency says the European Union is investigating on a rapid schedule whether the use of the drug remdesivir could be allowed for treating the coronavirus within the 27-nation bloc following a similar decision in the United States.

The Swedish Medical Products Agency’s infection department director, Charlotta Bergqvist, told Swedish broadcaster TV4 that the introduction of remdesivir with is now being studied with a high priority within the EU and a decision may be reached “in a few days.”

The U.S. Food and Drug Administration recently authorized emergency use of remdesivir on people hospitalized with severe COVID-19. The drug was originally developed for treatment of Ebola and produced by the California-based Gilead Sciences Inc.

Clinical trials have showed the drug has helped to shorten the recovery time for people who were seriously ill.

The town of Stillwater, Oklahoma issued an emergency proclamation May 1 to require the use of masks in essential businesses, stores and restaurants. That was amended the next day after workers reported threats of violence when trying to enforce the rule.

Norman McNickle, the City Manager for the town of Stillwater said, “store employees have been threatened with physical violence and showered with verbal abuse” during the short time the proclamation was issued. McNickle said at least threat of violence using a firearm occurred related to the proclamation.

The city has amended the order but is still asking residents to wear a face mask whenever possible.

George W. Bush releases video calling for unity in the fight to contain the new coronavirus

Former President George W. Bush released a video Sunday, which was posted to Facebook, calling for unity and an end to partisanship in the fight against the new coronavirus.

In the video Bush comments on partisan politics during the fight saying, “we are not partisan combatants. We are human beings, equally vulnerable and equally wonderful.”

President Trump responded to the release of the video with a tweet writing, “I appreciate the message from former President Bush, but where was he during Impeachment calling for putting partisanship aside.”

‘Murder hornets’ are showing up in the U.S.

Tara Reade: ‘I didn’t use sexual harassment’ in complaint against Joe Biden