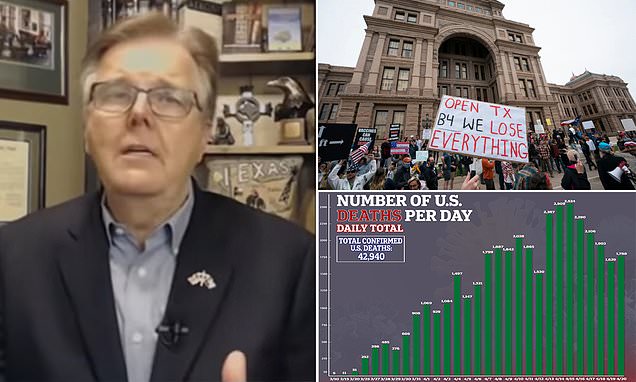 The lieutenant governor of Texas says there are more important things than living as he defended the decision to reopen the state’s economy amid the coronavirus pandemic.

Lt. Gov. Dan Patrick, who was heavily criticized last month for suggesting it was worth risking lives to save jobs, doubled down on his stance in an interview with Fox News’ Tucker Carlson on Monday night.

‘I don’t want to die. Nobody wants to die. But man, we’ve got to take some risks and get back in the game and get this country back up and running.’

Texas Lt. Gov. Dan Patrick, who was heavily criticized last month for suggesting it was worth risking lives to save jobs, doubled down on his stance in an interview with Fox News’ Tucker Carlson on Monday night

He had implied in an interview with Carlson on March 23 that he would rather die from COVID-19 that see the economy destroyed due to what he suggested was an overreaction to the disease.

In that interview, Patrick suggested that older people like himself, who are more at risk, would take care of themselves.

Patrick said on Monday that the economic hardships felt in Texas – who started reopening some businesses on Monday – and across the country as a result of the coronavirus lockdown measures had ‘vindicated’ him.

‘When you start shutting down the economy and people start losing their paychecks and businesses can’t open and governments aren’t getting revenues… I’m sorry to say I was right on this,’ Patrick said.

‘I’m thankful that we are now… finally beginning to open up Texas and other states because it’s been long overdue.

Patrick questioned the science and projected death toll of COVID-19 after an influential model relied on by the White House and health officials has seen the number of possible fatalities lowered since the outbreak first started.

‘We’ve had the wrong numbers. The wrong science. I don’t blame them but let’s face reality of where we are.

As of Monday, retailers were allowed to sell items for curbside pickup after Republican Governor Greg Abbott became the first in the country to announce the state would start lifting coronavirus restrictions

State parks reopened on April 20 and hospitals can start resuming surgeries on April 22.

From April 24, retailers can reopen but only if they can deliver their goods or services to people at home or in their cars to minimize contact.

Restaurants that have been banned from in-person dining will be allowed to reopen April 27.

Bars and nightclubs will remain closed.

State will not extend its stay-at-home order past April 30 meaning businesses will be allowed to reopen on May 1.

Some businesses will be allowed to reopen as early as April 27, but it’s unclear exactly which ones will be granted such clearance.

Most state parks will reopen on April 24.

Department stores and some other retail businesses to open April 20.

In Texas, there are currently more than 20,000 infections and 520 deaths as a result of the coronavirus.

Patrick’s comments came after Republican Governor Greg Abbott became the first in the country to announce the state would start lifting coronavirus restrictions.

As of Monday, retailers were allowed to sell items for curbside pickup, while elective surgeries could resume and state parks could reopen.

Abbott said last week that future decisions on reopening more of Texas would be guided by testing.

Although he assured that testing would ‘go up quite a bit’ in late April or early May, he did not provide a number.

Georgia, South Carolina and Tennessee have all since announced partial reopenings of state economies.

South Carolina opened some retail stores from yesterday, Georgia has announced plans to reopen gyms, beauty salons and barber shops this Friday, and Tennessee is set to ease stay-at-home orders within days.

Such a swift reopening runs counter to the advice of many experts, including Dr. Anthony Fauci, the government’s top authority on infectious diseases, who warned again Monday that resuming business too soon risked a fresh spike in infections.

Former Food and Drug Administration commissioner Margaret Hamburg told NBC’s Today on Tuesday that she fears for the US states that have decided to reopen because some aren’t even meeting President Donald Trump’s minimum criteria.

‘Some of these places are not even meeting the minimum threshold criteria that was put out in the Trump White House coronavirus task force guidance,’ Hamburg said.

‘I’m worried we don’t know enough about how the virus has penetrated their communities.’

Experts and health officials say a critical part of reopening stated and the US economy is widespread testing for coronavirus.

‘The critical issue is that you have to have a complete test kit with the swab and the reagents to be able to do the test… We also have to make sure we’re using a limited supply of tests wisely,’ Hamburg said.

‘We have been behind where we should be in terms of testing and that has made it really hard for us to even fully understand nature/scope of this epidemic,’ Hamburg said.

‘Many people who have looked at this deeply think we need to be doing somewhere between three and 20 times as much daily testing as we’re doing.’