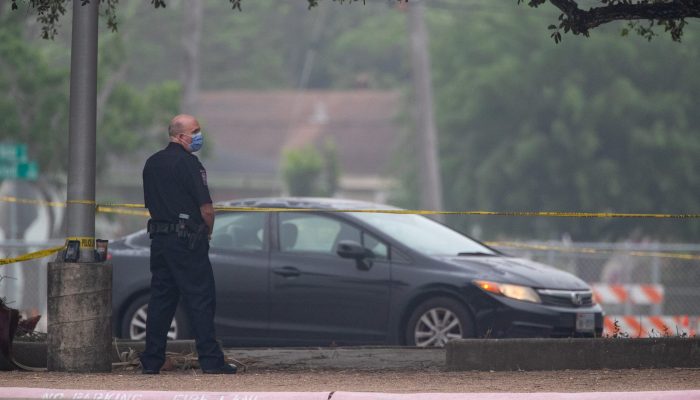 Researchers on Friday cast an improved picture of how the novel coronavirus could impact the Coastal Bend – but in their report, some degree of social distancing to offset spread remains an integral piece in drastically minimizing infections and fatalities.

Chris Bird, Texas A&M University-Corpus Christi associate professor of biology, said in a news briefing that cases in the Coastal Bend – a 12-county, 596,000 population region – were on a downward curve. It’s evidence that social distancing measures have been working, he said.

“While there’s a positive message here, I caution that just completely (going) back to normal on April 30, without additional considerations –  or maybe trading out one intervention for another  – is still something that could end with a peak in the not too distant future, with a lot of people contracting the disease,” said Bird, who plays a leading role on the project.

That would align with what is now considered about a two-per-day COVID-19 positive case average, scientists said.

In Friday’s presentation, researchers showed scenarios with a greater number of variables – whether the virus would be sensitive to seasons, and how relaxing various social distancing measures could affect when the Coastal Bend would see a peak number of cases, if it would see a true peak at all.

It’s thought that in Texas the transmission ratio of the virus is between 1.7 and 2.9, Bird said.

That means every person who becomes infected will likely pass the disease on to between one and three people.

It’s an improvement over last week’s ratio estimations of two to four people.

Maintaining social distancing, with the new estimates, would push the transmission ratio down to .7 – with the assumption Texans would comply with those directives at a level equal to people in other studied parts of the world, Bird said.

Going “fully back to normal” – dropping all mitigation measures come April 30 – would most likely precipitate a stark peak, their models indicate.

In that scenario, there could be 100,000 infections at the peak of the illness in early June in the Coastal Bend, according to the presentation.

Continuing with existing social distancing measures could push that number down to 346 people infected at any given time in June, essentially avoiding a peak.

Factors in some of the modeled scenarios included mitigations not previously included, such as seasonality – it’s thought that the virus most likely transmits less in the summer, although that is not known with certainty at this point – as well as the possibilities of mass testing, establishing treatments for the disease and wearing masks while in public.

It’s expected stores now shuttered can reopen for business late next week, but in a style in which products could be brought to buyers curbside.

Officials are expected to circle back April 27 to make further decisions about how to reopen the state. Those decisions will take into consideration medical professionals’ input, the governor said.

It’s an attempt to cushion the blows to an already-wounded economy, while also keeping the spread of the virus in check, officials have said.

Of Nueces County’s 89 positive COVID-19 cases, the public health district identified 38 as travel-related, and 29 linked to close contact with someone who had COVID-19.

Community transmission accounted for 17 of the cases, while seven – including the two most recently discovered – are under investigation for how the illness was acquired.

The state’s department of health services reported that as of 8 p.m. Thursday, there were at least 17,371 cases of COVID-19 in Texas, detected via 169,536 tests performed.

A total of 1,522 patients were currently hospitalized, according to the agency, and an estimated 4,190 have recovered.

The state’s data shows that of coronavirus cases that were identified, 428 were fatal.

More:Live updates on coronavirus in the Coastal Bend

Kirsten Crow covers government, industry and development in South Texas.Support local news by checking out our subscription options and special offers at Caller.com/subscribe