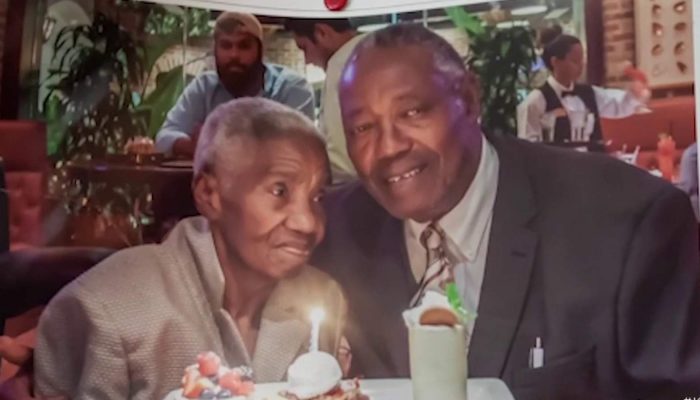 SAN ANTONIO – An 85-year-old fully recovered COVID-19 patient is sharing his journey to recovery, special memories of his wife — who died from the virus — and encouraging words to others in his community.

“I got a call that Monday. He was just saying how they weren’t feeling well, and that he was just going to take mom to the doctor because she had a fever and wasn’t feeling well,” said Zenzi Lewis, their daughter, who lives in Dallas. “I headed down there, and I heard from him again that night, saying they were admitting her, and they were going to check him out because he wasn’t looking too good.”

Lewis said because her mother had dementia for 12 years, doctors first thought she had pneumonia.

“She was already at a place of forgetting how to eat and swallow, so they said she had pneumonia caused by food aspiration,” Lewis said. “She was already transitioning, so it was just a matter of days, but they wanted to make sure she was comfortable.”

Lewis said doctors recommended her mother go into hospice care. Her father was released at first, but that changed a day later.

“I went to pick dad up, and he was saying how he felt horrible,” Lewis said. “He looked like a train wreck. He looked worse than what he did the day before. I took him to the ER, and they admitted him immediately.”

Wallace said he doesn’t remember anything about his symptoms or how critical he was in the hospital.

“They were giving me medicine to stop my blood from clotting,” Wallace said. “That was one of the things the virus causes — your blood to clot, shortness of breath and cough — and she said they were struggling to keep me alive and keep the air coming.”

Sadly, on March 21, his wife died from COVID-19 complications. She would have been 85 in May.

“I got a chance to see her in, like, a dome situation,” Wallace said. “They wheeled me up to her, and it took them about 25 minutes. I called her name, and she opened her eyes and smiled. Then she closed her eyes, and that was the last time I saw her.”

Wallace said he is at peace, knowing he took great care of his wife while she was alive.

He said having medical training in the U.S. Army prepared him to take care of his wife when she got diagnosed with dementia in 2005.

“Her kind of dementia was one of those deals where it was the aggressive type, and she always wanted to fight. I had to watch out, giving her medicine or taking her bath. She would sock me,” Wallace said with a laugh. “Even with her nurses, she would fight them. I would always have to tell her, ‘Don’t sock me, baby. I just want to give you a bath or clean you up. She loved getting in the tub. It was a pleasure taking care of her because I trained for that.”

As he fought for his life against the virus, Wallace said the only pain he could remember and felt was the needles and the swab tests going inside of his nostrils. He said on the third day after he tested positive, the test came back negative.

“They told me they wanted to get me ready to go home. They started giving me exercises and stuff like that,” Wallace said. “I told (the hospital worker), ‘Look, lady, I was a dance major! I don’t need no exercise. She said, ‘When was that?’ I said, ‘1952!’ She said, ‘Yeah, that is too long. You need to work out.’”

Lewis said the doctors and nurses spoiled her father.

“They pampered him entirely too much, in my opinion,” Lewis said, jokingly. “They loved him, and he loved them so much!”

When he came home Friday, he was like, ‘Who is going to cook me breakfast in the morning?’ I said, ‘You!’ I cleaned his house and got him enough groceries, so I was joking with him. He even told me he rang a bell, but nobody answered him,” Lewis said with a laugh.

Before the coronavirus hit Wallace and his wife, he was an active man with photography, music ministry and even writing music. He said that is something he will continue.

“As soon as I can, I want to get to a studio and record my Gospel music I wrote,” Wallace said.

While at home, the Fiesta Flambeau Association gave him his own social distancing parade.

“We had a good time,” Wallace said. “We had a real good time. They welcomed me home, and they said, ‘Mr. Wallace, what do you want?’ I told them some sweet potato pie and some collard greens. That is all I wanted,” he said with a laugh.

Wallace said that even though he went through the hardest recovery of his life, and even though he lost his wife during this journey, he wants others to remain positive and keep their faith alive.

“God has his angels all over us,” Wallace said. “I know there are people dying left and right, and we don’t understand why, but know that God is in control and says, ‘Do not worry.’”