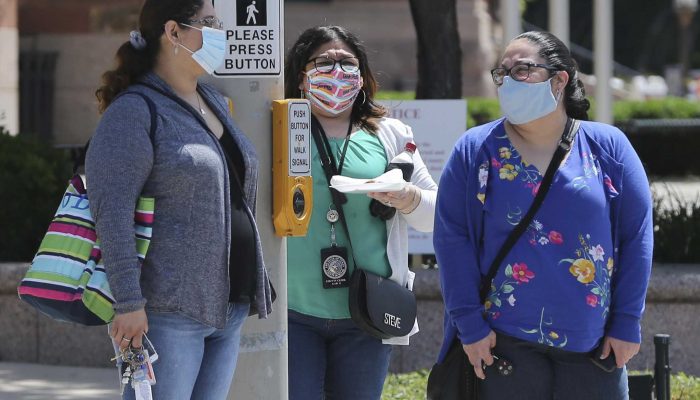 Bexar County saw another modest increase in COVID-19 cases Saturday but reported no new deaths for the second day in a row.

The number of confirmed cases rose to 1,231, an increase of 36 from Friday, San Antonio Mayor Ron Nirenberg said at the daily city-county briefing with Bexar County Judge Nelson Wolff.

No new deaths were reported, leaving the toll at 43 since the start of the pandemic.

Touting what he called “good news” on hospitalizations, Nirenberg said 62 people were being treated in hospitals for COVID-19, one fewer than on Friday.

Of the hospitalized patients, 32 are in intensive care and 17 are on ventilators to help them breathe, Nirenberg said.

Forty percent of those who have tested positive for the novel coronavirus in Bexar County have fully recovered, the mayor added.

“Continue the social distancing. Continue wearing your mask,” Nirenberg said. “The threat of the pandemic is that if we take it too carelessly, we can start seeing more outbreaks and we can be in even worse shape than we are now.”

In Comal County, officials reported the 49th case of COVID-19, a New Braunfels resident in his or her 30s who is in the hospital.

After more than a month of tight restrictions on business activity, momentum is growing in Texas and nationally to reopen parts of the economy.

Texas Gov. Greg Abbott has said he will make an announcement on Monday giving details of a plan to reopen “massive amounts” of businesses, including restaurants and hair salons.

Nirenberg said Saturday that he hoped the governor’s steps would be measured.

“No matter what changes are looming, our fight against this pandemic is a marathon, not a sprint. We still have a lot of work to do,” Nirenberg said. “We’re hopeful that the governor’s words about putting health first are going to lead to some pretty thoughtful action.”

San Antonio and Bexar County are moving on a somewhat slower timeline than Abbott. Nirenberg and Wolff have created transition teams of medical experts and business leaders to advise them on how and when to begin reopening.

The teams are working together on a series of recommendations. The health committee will present its findings to the City Council and Bexar County Commissioners Court next week, and the economic panel will do so the week of May 4. Restrictions could begin to be eased thereafter, although no date has been set.

Wolff said the governor will determine when businesses will be able to re-open. Local officials, however, will “play a pretty big role” in determining what protections must be established to prevent a surge in infections, Wolff said.

“Between the two (transition teams), we should come up with all the safeguards that are necessary as more and more businesses open,” Wolff said.

Dozens of protesters gathered at the Alamo Saturday afternoon to call for an end to the restrictive city-county measures, including a requirement that people wear facial coverings in public spaces where it’s difficult to maintain a 6-foot distance from others.

Nirenberg had harsh words for the protesters, many of whom weren’t wearing masks or practicing social distancing. Some carried rifles.

“If someone is cavalier about wearing a mask and wants to prove their manhood that we can’t force them, they’ll have to sleep with that, and realize … that they didn’t do a darn thing to help their fellow neighbor,” Nirenberg said.

There were no new confirmed cases of COVID-19 at the Bexar County Jail on Saturday, Wolff said.

Members of the San Antonio Fire Department began testing jail deputies for the virus as they arrived for work. A total of 90 deputies were tested Saturday, and Wolff said there are plans to test all the jail’s 3,000 inmates.

In places where people are forced to congregate, “the best practice right now is to do universal testing,” said Dawn Emerick, director of the San Antonio Metropolitan Health District. “Jails are definitely one of those areas.”

In Congress, Democrats and Republicans have clashed over whether to send billions of dollars to cash-strapped state and local governments hit hard by revenue declines and the costs of fighting the pandemic.

San Antonio is facing a budget shortfall of up to $180 million, so federal aid is “absolutely critical” for a post-pandemic recovery, Nirenberg said.

“We’ve been working with our federal delegation and mayors across the country to ensure the administration hears our voices,” Nirenberg said.