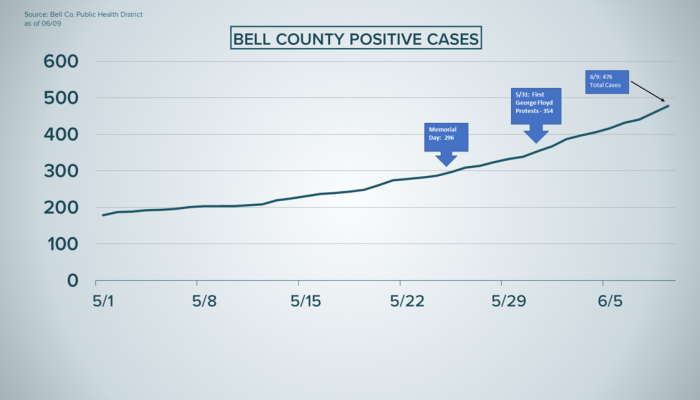 TEMPLE, Texas — The Bell County Public Health District reported 90 new cases of COVID-19 since June 3 with 38 of them coming in the past two days.

The two day increase is the largest since the county started reporting cases on March 11.

The city of Temple alone had 180 reported cases which surpasses the county’s largest city, Killeen, at 163.

As of June 9, Bell County was reporting a total of 476 cases with 237 of those patients recovered.

19,887 tests have been conducted which puts the positivity rate, which is the number of positive cases divided by the numbers of tests given, at roughly 2.4%.

It’s a similar story in the state of Texas where numbers have been steadily increasing since the state reopened on May 1.

Chadwell said there has been an increase in cases simply due to the re-openings and gatherings in the county. As people return to hospital facilities for elective procedures they are automatically getting tested, Chadwell said hospital staff are finding people with no symptoms are testing positive for the virus. And yet another reason, Chadwell said there are concerns that citizens under 50 have been to complacent about safety. Testing data shows most people testing positive for COVID-19 are between the ages of 20 and 59 while older individuals make up a smaller portion of cases.

One other factor to consider is the increase in cases since the protests, sparked by the death of George Floyd, began in Texas.

61,006 cases had been reported in Texas as of May 29 when the first protests were held. As of Monday, that number had increased by 14,610. Over the course of the ten days before May 29 the number of new cases reported was 9,864.

Positive COVID-19 cases in Texas since May 1.

Positivity rate in Texas for COVID-19 since May 1.

RELATED: How many people are in the hospital with COVID-19? Texas just set a record

About the Author: KCEN