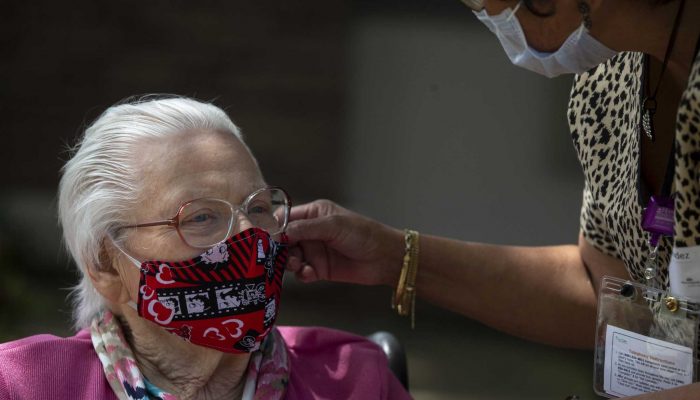 
The San Antonio area saw a hefty increase in confirmed COVID-19 cases Friday, pushing the total number of people diagnosed with the virus to 1,477.

That includes 103 new cases confirmed in the past 24 hours — a number considerably higher than what has been reported in recent days.

But Bexar County Judge Nelson Wolff noted that the surge was mostly a result of increased testing at the county jail, where an outbreak has been sweeping through the inmates and staff.

So far, 157 inmates have been diagnosed with the highly contagious virus. Some of them remained hospitalized Friday.

Ten inmates have recovered so far.

Wolff said most of the inmates testing positive aren’t showing symptoms but are being separated from the rest of the jail population in an effort to reduce the spread of the virus.

No new deaths in the San Antonio area were reported Friday, so the local COVID-19 death toll remains at 48, Mayor Ron Nirenberg said.

The number of people hospitalized locally with the deadly virus increased to 60. Among them, 42 were in intensive care units, while 21 were on ventilators to help them breathe.

The number of people who have recovered locally also continues to grow. As of Friday, 683 recoveries were reported — an increase of more than 100 in three days.

Across Texas, more than 29,000 people have tested positive for the virus since the start of the pandemic. The state’s death toll stood at 816 as of noon Friday, while nearly 1,800 people are in Texas hospitals being treated for the virus.

More than 14,000 Texas patients have recovered from the illness so far.

Harris County, the home of Houston, continues to diagnose far more cases than any other Texas county. Nearly 6,400 people have tested positive there since the start of the pandemic, while 114 people have died.

In Comal County, three new cases of COVID-19 were diagnosed Thursday, bringing the county’s total to 58. Those patients live in New Braunfels, Bulverde and eastern Comal County. Of the three new patients, two of them are hospitalized, while the other is isolated at home.

On ExpressNews.com: With masks and Lysol, San Antonio retailers prepared for Friday’s reopening

Most of Comal County’s patients have recovered from the virus, while 13 have active cases. The county’s death toll stands at six.

Comal County is now offering COVID-19 antibody testing by appointment. That test determines if someone who is healthy had the COVID-19 virus in the past and now has antibodies that usually provide immunity from the disease.

County residents can make an appointment for antibody testing by calling 830-221-1150. The testing is offered through a partnership between the Comal County Office of Public Health and Clinical Pathology Laboratories.

“CPL can use our facilities to do the testing, and in return, the county gets additional data about the spread of COVID-19 in our community,” said Cheryl Fraser, Comal County’s director of public health.

Local physicians continue to operate a drive-through testing site in New Braunfels, where patients can be tested for active cases of the virus. Comal County residents can make an appointment for COVID-19 testing by calling 830-312-7980 between 8 a.m. and 4:30 p.m. Mondays through Fridays. If patients don’t have a doctor, one will be assigned to follow up with them after their test.

In Guadalupe County, where Seguin is located, 81 people have tested positive for the virus since the start of the pandemic. Among them, 52 have recovered, while 43 patients’ cases remain active. No deaths have been reported.

In Wilson County, the home of Floresville, 33 people have tested positive for the COVID-19 virus in recent weeks.

Most of those cases — 23 in all — are connected to an outbreak at the Frank M. Tejeda Texas State Veterans Home, Floresville Mayor Cissy Gonzalez-Dippel said on her Facebook page Friday. Fourteen residents and nine staff members at the state veterans home have tested positive for COVID-19, she said. Three people have died.

On ExpressNews.com: Some San Antonio churches to welcome back worshippers this Sunday — with social distancing and protections

Across Wilson County, 14 people have recovered from the virus.

In Atascosa County, the home of Pleasanton and Jourdanton, 19 people have tested positive for the virus. Of those, 11 have recovered, seven are still sick and one has died.

In Medina County, 20 people have tested positive since the start of the pandemic. Most of those patients — 13 people — have recovered. Five patients are still sick. Two people have died.

Medina County officials said a COVID-19 mobile testing site will be open by appointment only from 9 a.m. to 5 p.m. today at Devine Fire Station No. 2 at 1419 County Road 5710. This testing is open only to patients showing symptoms of the virus, such as fever or chills, coughing, body aches, muscle or joint pain, shortness of breath, sore throat, headaches or a loss of taste or smell. Before getting tested, patients must register at TxCovidTest.org or by calling 512-883-2400.

In Bandera County, a COVID-19 mobile testing site will be available by appointment only Wednesday. The exact location hasn’t been disclosed. Patients showing symptoms of the virus can make an appointment to be tested by calling 512-883-2400 or by visiting TxCovidTest.org beginning Monday.

So far, only six people have tested positive for the virus in Bandera County, state health officials said.

About the Author: Peggy O’Hare