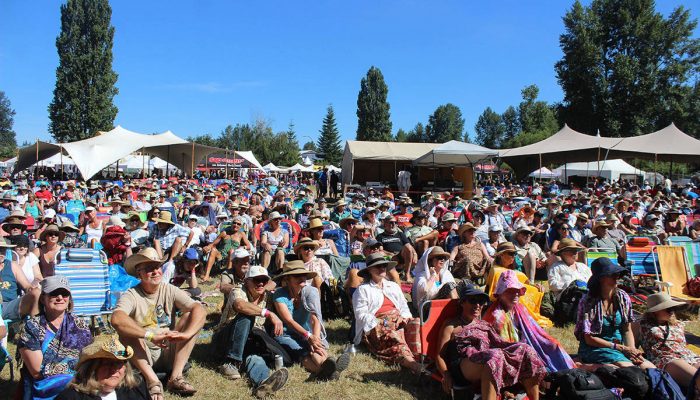 At her April 18 COVID-19 update, B.C.’s provincial health officer announced the social restrictions in place would not be lifted in time for any large-scale events this summer.

“Realistically, we will not be having those big events where people gather together this summer,” Dr. Bonnie Henry said during a news conference. “This is a challenging time around our world and it’s not going to be easy for us to get out of it, but those types of large, mass-gatherings where we have lots of people together, this is not the time for that.”

And with that, Cox turned to Plan B.

“For the last month or so, we’ve been preparing two plans – one for the festival to go as scheduled (July 10-12), and one in case of cancellation,” he said.

“Now that we have cancelled the festival, we have to deal with the fallout from all that – dealing with the ticket-buyers, all the suppliers, sponsors, cancelling all the performers,” said Cox.

As for ticket-holders, Cox said there will be an announcement forthcoming.

“We will be sending out an announcement in the next few days.”

Apart from the logistical challenge MusicFest management faces in the days and weeks ahead, Cox said the toughest thing is simply accepting the reality of the situation.

“We are devastated,” he said. “Our biggest thrill for so many of the staff that put on the festival are those set-up days, when people are at the site, watching everybody arrive, watching the team come together to build the ‘town’ of MusicFest. So many people look forward to that all year. Aside from the music and the financial impact and all of that stuff, that’s the heartbreaking part, is to know we are not going to have that celebration this year.”

Cox added that even before the government intervention, it was becoming clear in the past few weeks that this year’s event would not be possible.

“When you look at our own responsibility when it comes to the health of our patrons and our volunteers – we have a kids’ area, we have a kitchen that feeds 2,000 people a day, we have a campground of 4,000 people, we have people travelling from all over the world to get here – it’s just impossible,” he said. “It would simply be the wrong decision for us to proceed with the festival this year.”

Although Henry made the announcement at her daily briefing Saturday, there has yet to be an official directive from the government, regarding the process to be followed for such events.

While Cox expects to hear of a relief program set up through the federal government to ease the financial burden of such a cancellation, he appreciates that’s not a top priority for the government, at the moment.

“Really, this is tough, but there are no sour grapes,” he said. “I am so proud to be a Canadian, in terms of how our government has tried very hard to support everyone.”