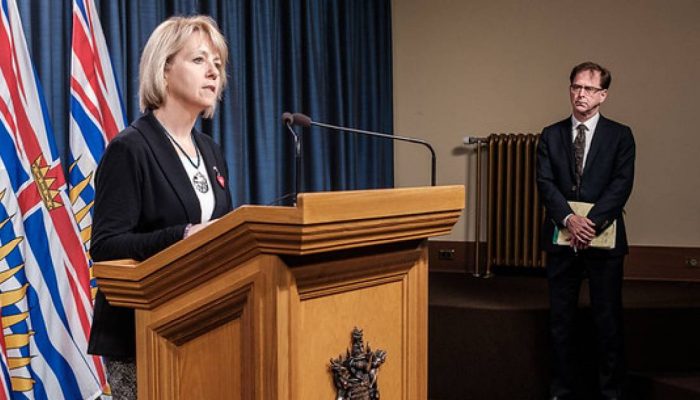 B.C. provincial health officer Dr. Bonnie Henry and Health Minister Adrian Dix spoke today (April 21) about how COVID-19 vaccinations might be carried out and also had a further discussion about how some things might reopen, including team sports, when it becomes possible to do so.

Today, Dr. Henry announced that 25 new cases have been confirmed. Accordingly, the province has now had a total of 1,724 cases.

One new case at the Mission Institution correctional facility, involving 65 inmates and 11 staff members, brings the total number of cases to 76 infections there.

There aren’t any new cases linked to B.C. workers returning from the Kearl Lake oilsands project in Alberta, and there remain 20 longterm care facilities with outbreaks.

Dr. Henry explained that not all of the 28 cases from the outbreak announced today at the United Poultry Company in East Vancouver are included in today’s totals.

Currently, there are 109 people are in hospital, with 51 of those patients in intensive care units

There has been one new death (of an individual in a longterm care facility), raising the total to 87 fatalities.

Dr. Henry previously spoke about how the current goal is figuring out how to manage things until a vaccine is created, which could be up to a year away.

She stated that in their pandemic strategic planning, they made plans for organizing mass vaccination clinics and how to determine the sequencing of immunization. (She explained that they learned from the 2009 influenza pandemic vaccinations.)

Among those first in line would be healthcare workers, seniors, immunocompromised individuals, or those with underlying conditions that make them more at risk for infection, she said.

In addition, Dr. Henry that said they have a framework for how it will be implemented and that it can be done within a few months across the province.

“It doesn’t mean that everybody has to have this, and certainly we do not have any mandatory immunizations in this country…but it is incredibly important that we do what we can to protect those who are most vulnerable to this disease,” she said.

While the province is considering partially lifting some restrictions sometime next month, Dr. Henry cautioned that they have to determine ways in which this can be done without reducing awareness of the ongoing pandemic.

“A couple of outbreaks that we’ve had recently have expanded because people have not paid attention to even having mild illness and that presentism that we have,” she said.

For the resumption of some medical or personal services, including dentists, physical therapy, or hairdressing, Dr. Henry said that they will have to consider ways in which they can resume while maintaining safety.

For team sports, Dr. Henry said that she recognizes the importance of exercise for young people and that risks for spreading the virus are less risky outside than indoors.

However, she also said that they have to ensure that people aren’t sharing water bottles or food, are maintaining safe distances, and other health precautions.

She said that they may have to limit the number of people involved in events, as they can’t have large audiences gathering.

Similar to what she said yesterday about how she is turning to those in food industries to provide ideas on how to maintain safety measures while reopening establishments, she is also hoping those involved with sports can offer suggestions that can help her to provide guidelines.