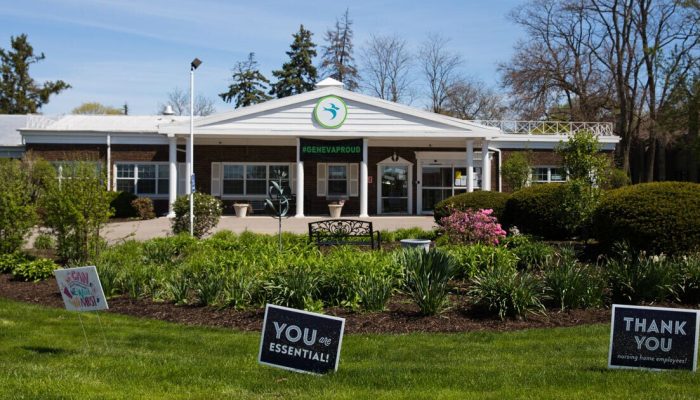 
ProPublica Illinois is a nonprofit newsroom that investigates abuses of power. Sign up to get weekly updates about our work.

The family of a woman who died last month from COVID-19 has filed a lawsuit against the nursing home where she lived, which has had one of the largest and deadliest outbreaks of the virus in Illinois.

The lawsuit alleges that negligence at Bria of Geneva led to the death of Helen Osucha, 97, who died April 26 after she became “gravely ill” as the coronavirus spread through the nursing home about 40 miles west of Chicago. Osucha was not isolated from other residents or tested for the coronavirus and her family was not informed that she was ill, according to the lawsuit.

Help Us Report on Coronavirus

Are you a public health worker, medical provider, elected official, patient or other COVID-19 expert? Help make sure our journalism is responsible and focused on the right issues.

Note: If you develop emergency warning signs for COVID-19, such as difficulty breathing or bluish lips, get medical attention immediately. The CDC has more information on what to do if you are sick.

Kane County Coroner Rob Russell confirmed that Osucha had died from the virus and said that she was tested by the nursing home before she died. The wrongful death lawsuit was filed Monday in Kane County Circuit Court by Osucha’s daughter, Pamela Colwell, and names Bria Health Services, which operates nine Illinois facilities in the Chicago suburbs and near St. Louis.

“They didn’t do anything to protect their residents. When they knew of a pending problem they didn’t follow even the Illinois Department of Public Health’s suggestions,” said attorney Peter Flowers, who is representing the family. “Our contention is that they were grossly negligent in how they took care of their patients. That is why so many of their patients have died.”

A ProPublica Illinois story last week revealed that Bria of Geneva was nearly unparalleled among Illinois nursing homes in the scale of its coronavirus outbreak. More than two-thirds of the 91 residents and more than three dozen of the 120 workers were infected with the virus. At least 25 residents, or more than one-quarter of them, have died from COVID-19, the most recent on Friday, according to the county coroner.

As of Monday, 50 residents and 33 staff members have either recovered from the virus or are asymptomatic after testing positive, according to the nursing home.

According to figures released Friday by Illinois public health officials, at least 1,975 residents of Illinois nursing homes or other long-term care facilities have died from the virus — roughly half of all COVID-19 deaths in the state. The disproportionate toll on the elderly is most pronounced outside Cook County. In these areas, long-term care centers account for two-thirds of all deaths, according to a ProPublica Illinois analysis of data from the state Department of Public Health.

Nursing homes have been hit particularly hard because of delays in obtaining tests for the coronavirus and because Illinois public health officials initially didn’t recommend testing all residents and staff when homes detected a single positive case.

That was the case at Bria of Geneva, which didn’t begin conducting widespread testing until April 23, six days after the first resident tested positive after being admitted to the hospital. The nursing home’s medical director used connections in the medical profession to get tests. But the lawsuit alleges that problems began earlier, claiming Bria of Geneva did not take measures that could have limited the outbreak.

“Bria-Geneva chose not to undertake reasonable measures to ensure its employees and staff complied with the COVID-19 preventative directives,” the lawsuit alleges. By not taking those measures, the nursing home left “its vulnerable residents defenseless against the community spread of the virus.”

A Bria Health Services spokeswoman, responding to the lawsuit, said the nursing home partnered with departments of public health and followed their evolving guidance as more information about the coronavirus became known.

“Because testing was not immediately accessible, the high number of asymptomatic carriers among residents and staff created a silent enemy impossible to detect and difficult to defeat,” the spokeswoman said in a statement, noting that those challenges are why Gov. J.B. Pritzker issued an order that shielded health care providers from some lawsuits. “We remain committed to providing compassionate care to our residents.”

Dr. Philip Branshaw, the medical director at Bria of Geneva, has told ProPublica Illinois that residents were well cared for and workers had sufficient protective gear. He said the nursing home was hamstrung by a lack of testing supplies. He said that after the first patient tested positive, “it was a landslide.”

“I don’t believe any of our residents have been neglected,” Branshaw said in an interview this month. He said the nursing home coordinated with the county Health Department to come up with a “game plan” to treat and try to isolate residents with coronavirus symptoms. Once there was widespread testing, he said, the nursing home placed residents who tested positive in a separate wing.

“Under the circumstances, I thought the performance of the providers and especially the inundated staff … were quite frankly heroic in dealing with the coronavirus,” Branshaw said.

Some of Bria Health Services’ other facilities also have suffered large outbreaks. Bria of Westmont has had 13 deaths and Bria of Palos Hills has had eight, according to data from the state public health department.

Pritzker issued an executive order April 1 that granted immunity from civil lawsuits to hospitals and nursing homes as long as the facilities had taken steps to prepare to treat patients with COVID-19, including by increasing the number of beds and preserving personal protective gear.

He amended the executive order last week to provide legal protection only when the facilities had provided widespread testing of residents and widespread and regular resting of staff. He also granted immunity to facilities that accepted COVID-19 patients from hospitals or other facilities.

Illinois is one of at least 15 states that have provided some legal protection to hospitals and nursing homes if residents become sick or die from the coronavirus, according to The New York Times. The immunity does not cover gross negligence or willful misconduct.

“It is our contention and it will be crystal clear that this facility did not meet the standards required to obtain immunity,” Flowers, the attorney, said. “They didn’t do things that any logical nursing home would have done in this pandemic.”

The lawsuit alleges, for example, that a resident who was diagnosed with pneumonia in late March was not isolated or tested for COVID-19. The lawsuit does not name the resident, but ProPublica Illinois confirmed with the family and the law firm that filed the lawsuit that it was Lucille James, 80, who died May 1.

James had a cough and was given a chest X-ray that showed mild pneumonia, according to an email that her daughter, Susan Borowiak, received April 1 from a nurse practitioner at Bria of Geneva. She was not tested for COVID-19 at the time and workers told her that James’ health had improved, Borowiak said. James was tested for COVID-19 in late April and died May 1, Borowiak said. The death certificate said she died of COVID-19, she said.

“Shouldn’t they have tested her right away during the pandemic?” Borowiak asked. “We couldn’t see her. … We are in the dark completely. We trusted them to be doing the proper thing.”

Osucha’s health began to decline around April 15, leaving her bedridden and unable to eat or go to the bathroom on her own, the lawsuit alleges. She died 11 days later without her family present.

Tell Us More About Coronavirus

Are you a public health worker, medical provider, elected official, patient or other COVID-19 expert? Help make sure our journalism is responsible and focused on the right issues.

This form requires JavaScript to complete.
Powered by Screendoor.

About the Author: ProPublica