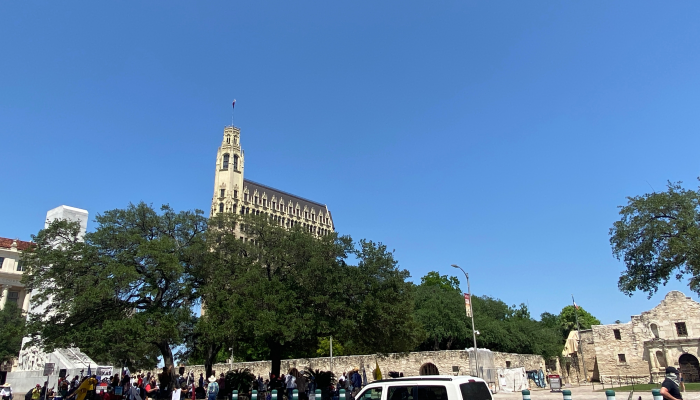 Texas Public Radio is updating the latest information on COVID-19 in the San Antonio area, along with how local businesses are adjusting, how you can help those in need and what you can do to stay entertained at home. TPR is also providing live updates on the Rio Grande Valley.

Recipients of Supplemental Security Income who don’t file tax returns will receive their automatic Economic Impact Payment in May.

The Social Security Administration said people receiving SSI benefits who did not file in 2018 or 2019, and who have qualifying children under age 17, shouldn’t wait for their $1,200 payment.

Recipients should visit the “Non-Filers: Enter Your Information” section at IRS.gov/coronavirus.

These eligible SSI recipients must act by Tuesday, May 5th, to receive additional payments for their eligible children.

A small group of armed people are gathered at the Alamo to protest the ongoing renovations @TPRNews pic.twitter.com/5k3hbQe7Zb

Several dozen protesters gathered in front of the Alamo in San Antonio and at Boerne’s new city hall complex on Saturday.

In San Antonio, dozens of protesters, many of them armed and masked, protested the plan to move the Cenotaph as part of the Alamo Plaza renovation project.

A group “This Is Texas Freedom Force” organized the event. Brandon Burkhart, the group’s president, said the city moved a Confederate statue from Travis Park shortly after Hurricane Harvey in 2017, when most of the group was in Houston.

“How chicken and cowardly is that?” he asked rhetorically. “So whenever the COVID-19 orders went into effect, we started monitoring the Alamo Cenotaph here every single day.”

Some members of the group said they were prepared to take all necessary actions to defend the Cenotaph’s current location, but most committed to using nonviolent tactics.

The city’s plan calls for the monument to be moved about 500 feet to the south.

Some others at the same protest also said the Alamo renovations are non-essential and should wait until the city’s “Stay At Home, Work Safe” orders are rescinded.

In a statement to TPR, the City of San Antonio explained that, “Construction crews are expected to abide by COVID-19 social distancing and face covering rules and regulations.”

In Boerne, dozens of people protested the city’s orders that shuttered businesses because of the coronavirus crisis.

Barbara and Bruce Burger were in Boerne. They own businesses in both cities. They joined several dozen other people to condemn

“That’s the worst thing that you can do is shut somebody’s constitutional rights down,” Barbara Burger said.

“I don’t understand how they can tell how the government can tell us as small business owners that we have to shut down!” Bruce Burger added. “That’s going way above and beyond anything I ever thought I would see in America.”

Galen Morgan was ready to speak to the state and national leaders.

“This message is for Gov. [Greg] Abbott and President [Donald] Trump. I still believe in the Constitution. I still have my right to my life, my liberty and my pursuit of happiness. You took it away, and I’m getting it back. With or without you, I know how to vote.”

Many people at the event said that Boerne has seen few COVID-19 infections so shuttering non-essential businesses was unnecessary. They emphasized the need to get businesses reopened and get the economy back on track.

Abbott was expected to make an announcement Monday on the state’s next steps in reopening the economy.

Friday, April 24, would have been the 129th parade for the Battle of Flowers Association. But the city has delayed Fiesta until November.

But this year had special meaning. Their mother, Guadalupe Perez, would hold the space for them each year. She died of heart-related problems in March, before the coronavirus crisis began.

On Friday, the family decorated their cars and trucks with streamers and signs, held their own parade and celebrated her memory at her spot.

“It was a tradition – sisters, brothers, family, she would invite everybody to be there at the parade with her every year,” said Marianne Perez. ‘We’re so proud of my mom and we’re doing this to honor her.”

With no Battle of Flowers parade today due to COVID-19, a family held one of their own on a single block of Commerce St. to remember their mother who died last month.

Their mother – Guadalupe Perez – had reserved the same parade spot for them for decades. @TPRNews pic.twitter.com/B4SoSzfECv

Customers can order products online, and employees of participating stores will fulfill the orders and bring them curbside to customers to maintain social distancing.

Payment will be done electronically to avoid contact. Designated parking areas for participating stores will be marked for pickup.

Customers will contact their store upon arrival and give store employees details about their vehicle to complete the delivery. Customers should also make sure space is cleared in a vehicle to minimize contact.

South Park is also operating on a retail to go basis, and the mall doors remain closed to the public. Designated entrances will be assigned for to go deliveries.

Hours for other shopping complexes are here: The Forum / The Rim / Tanger Outlet Malls of San Marcos

For more updates about how the overall business community has adjusted to the realities of the coronavirus crisis, follow TPR’s special blog that is tracking the latest developments.

All Bexar County Sheriff’s Office deputies, civilian staff, and inmates at the Bexar County jail will be tested for COVID-19, a statement from the office explained.

Testing at the jail will be conducted daily and will continue until all staff and inmates have been tested.

Testing will also include all county staff, University Health System staff and contracted personnel working at the jail.

Units at the main jail and jail annex have been repurposed to support COVID-19 patients in the event more cases arise within the facility.

The soldiers had been in a so-called ‘protective bubble’ of training at Fort Jackson for several months. Each trainee was screened for COVID-19 prior to basic training, and were screened daily for two weeks prior to their departure flight.

Sgt. First Class Christopher Bullis is a drill sergeant assigned to the U.S. Army Medical Center of Excellence. He said trainees were screened upon arrival at Kelly Field.

“We want to really make sure that we pay extra close attention to our safety and screening soldiers to make sure that they are not going to further infect the training population that’s already on Fort Sam Houston.”

The soldiers will begin training at the U.S. Army Medical Center of Excellence at Fort Sam Houston.

With Fiesta postponed to the fall, one San Antonian whose identity is tied to the citywide celebration should be having a tough week … but he’s not.

First off, you need to know that Michael Quintanilla has an unofficial title.

“Yes, Mr. Fiesta!” he joked. “I guess you could say that Fiesta for some people has become a siesta. But I’m trying not to sleep my way through that through these eleven days!”

The former fashion writer for the San Antonio Express-News first got the Mr. Fiesta title there at the newspaper.

“It was coined actually by a good friend of mine,” he explained, “because I would show up at the Express-News wearing my hats and costumes and just, you know, silly things.”

Quintanilla takes dressing up to extremes, from bedazzled top hats and shoes to flowing capes and even silver suits. During Fiesta, over the top is his norm.

San Antonio is looking less than sparkly these days but Quintanilla is determined that the party will go on.

“We also have to find moments of joy. And this is how I choose to find it with Fiesta. And I know other people do, too.”

Also, TPR’s Joey Palacios recently met a family who held a special memorial for the biggest Fiesta fan they knew: their family matriarch, who passed away last month. They shared with him their memorial to her.

Mayor Ron Nirenberg and County Judge Nelson Wolff praised the city-county operation at Freeman as an example for the state to follow, like it did after major hurricanes.

“Let the record show, once again, I mean this happened 15 years ago — when the state wants to learn how to do emergency response they come to San Antonio,” Nirenberg said.

Hood explained the guard members will be mobile and deployed to conduct testing in areas that are underserved in the city and region.

Boerne Independent School District has Wi-Fi hotspots available at several of its schools.

Social distancing is encouraged when using the Wi-Fi hotspots.

A system capable of decontaminating 80,000 medical grade masks a day in the battle against COVID-19 is being set up at Freeman Coliseum.

San Antonio Fire Chief Charles Hood reported on Friday that local hospitals will mark their own masks before being transported for decontamination.

“They are going to put a name or initials on the masks because they found that it’s better to get your own mask back,” he explained. “So those will be … double bagged, boxed and then they will be sent for the decontamination.”

Hood said hospitals outside of San Antonio will also have access to the decontamination system operated by Ohio-based Battelle. The system uses a process for decontamination called “vapor-phased hydrogen peroxide” and allows the masks to be safely reused.

Fifty-seven inmates at the Bexar County Jail have tested positive for COVID-19, and ten have recovered.

The Texas Organizing Project is providing bail for low level offenders. Since the pandemic began, the Bexar County jail has released more than 800 inmates. About 3,000 remain.

“What we’re doing with them is we’re actually supplying them with the names of people that we think would be good candidates for it,” he explained. “And then they make the decision based upon what their resources are and how comfortable they feel.”

Mayor Ron Nirenberg and County Judge Nelson Wolff were joined by Fire Department Chief Charles Hood at Friday’s briefing. Nirenberg said that the number of confirmed cases is up 28 from yesterday, bringing the total to 1,195.

The total number of recoveries is now 383, up 22 from yesterday. There are no new deaths from yesterday, leaving the total at 43.

Wolff said the Bexar County Jail has confirmed 21 more cases, bringing the total at the jail to 57. Of those 57, 10 have recovered, 45 are isolated and two are in the hospital.

Both Wolff and Nirenberg acknowledged that Gov. Greg Abbott will reevaluate his executive order for Essential Services and Activities Protocols next week.

“When we talk about the management and the containment of this pandemic years from now, I think San Antonio will show as a bright star, all of the things that we’re doing to control this pandemic and save lives. So, thank you for doing your part,” Nirenberg said. “This is a work in progress, though,  and when we’re making that progress and flattening the curve, it’s not time to stop.”

“The orders that come out from the city and the county from the judge and myself next week will reflect everything we can do to keep our community safe and hope that in a safe manner depending on what our state does,” he said.