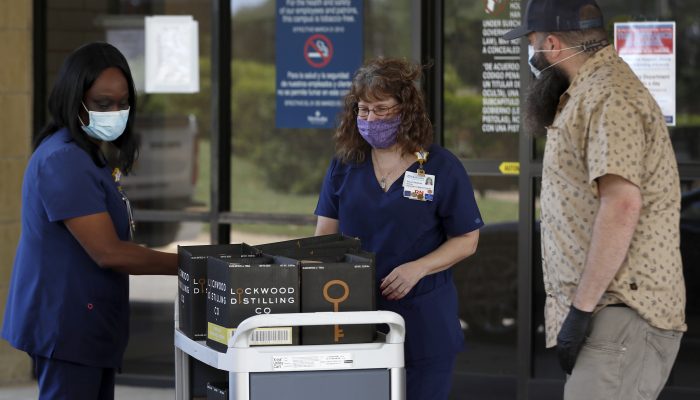 What should I know about coronavirus? Get information from the CDC. What’s been happening locally, statewide and nationally? Check out special coverage from NPR, PBS and the public radio stations in The Texas Newsroom: KERA for North Texas (including quick daily updates below); KUT in Austin; Houston Public Media; Texas Public Radio in San Antonio; and Marfa Public Radio. How’s coronavirus affecting North Texans on the financial edge? Take an in-depth look at our new series, “One Crisis Away: Coronavirus And Life On The Financial Edge.” In Texas: More than 50,500 cases and 1,388 deaths have been reported. More than 29,350 Texans have recovered. In North Texas: Cases in Dallas County: 7,904; Tarrant County: 4,643; Collin County: 1,073; Denton County: 1,116. There have been at least 380 reported deaths in the region’s four largest counties.  Counties across Texas: Use The Texas Newsroom’s interactive maps.  Global: See Johns Hopkins University’s COVID-19 dashboard.

The most recent data from Tarrant County’s public health department shows COVID-19 cases in hospital emergency rooms are on the decline.

“May is starting to look a little bit better,” Taneja said. “We had a little peak when I spoke with y’all last time and now it looks like we’re coming off of that peak.”

Meanwhile, the data shows hospital bed capacity has stayed about the same, with less than 10% of available beds being used for coronavirus patients.

Taneja also said the number of COVID-related deaths is gradually flattening, but he warned that delays in reporting positive cases can make the most recent numbers unreliable.

“This is sort of the most sensitive of indicators where the lag is less,” Taneja said. “So, fairly okay to look at this and say, ‘Okay, we are starting to trend down at least on the COVID-like illness visits into [ERs}]in Tarrant County.'”

Taneja also noted that about 65% of COVID-related deaths in the county have been in those 65 or older, and urged that population to stay quarantined at home.

The U.S. government is indefinitely extending an order that allows officials to quickly remove unauthorized migrants at the border. The order was initially issued in response to the coronavirus pandemic.

The CDC directive allows for swift expulsion of unauthorized migrants, including asylum-seekers and unaccompanied children. The order was issued in late March, then extended for 30 days.

On Tuesday, CDC director Robert Redfield extended the order again — but with no end date this time. Instead, it will stay in effect until he determines “the danger of further introduction of COVID-19 into the United States has ceased to be a serious danger to the public health.”

The Department of Homeland Security has used the policy to effectively seal off the border to asylum seekers. Since it went into effect, just two people seeking protection were allowed to stay in the U.S. to pursue asylum, as of May 13.

The U.S. government also announced Tuesday its borders will remain closed to non-essential travel for at least another month.

Eleven people held at a federal immigration detention center in Alvarado are suing Immigration and Customs Enforcement for their release.

The Dallas Morning News reports their lawsuit argues the immigrants are medically vulnerable to an outbreak of coronavirus at the center.

A federal judge has given the U.S. attorney’s office in Dallas until May 29 to respond to the suit.

ICE says 45 of the nearly 500 immigrants at the center have tested positive for coronavirus as of yesterday.

Federal Judge Rules In Favor Of Vote By Mail In Texas

In the latest twist in an already complex legal battle, a federal judge Tuesday ruled that any Texas voter who wants to vote by mail should be allowed to do so — but the Texas Republican attorney general is hitting back.

Judge Fred Biery of the Western District of Texas issued the injunction. Effectively, he said it would violate the U.S. Constitution for Texas to deny absentee ballots to voters who fear contracting COVID-19 when voting in person.

The judge’s move supersedes a stay by the Texas Supreme Court last week in a related state lawsuit. The Texas Democratic Party is the plaintiff in both the state and federal suits.

Texas Attorney General Ken Paxton said he would immediately appeal the federal court’s decision to the U.S. Fifth Circuit – widely regarded as the most conservative appeals court in the country.

Time is running short for a resolution of the issue before Texans next go to the polls. Early voting in the Texas primary runoff election begins in less than six weeks.

Appraisal notices are going out to homeowners and commercial property owners across North Texas.

The notices are based on values established in January, but Dallas County’s preparing for owners to protest property values because of the coronavirus pandemic’s effect on the economy.

“If this continues to go on and god forbid there’s a second wave,” Nolan said. “’21 will not be a good year for anyone value-wise because we’ll have because it was going on in January of 2021.”

Dallas County property owners have until June 15 to protest their appraised valuations.

The deadline for Tarrant County property owners is June 1.

DCPH is providing free drive-thru COVID-19 testing at the Trophy Club on Friday, May 22 from 8 a.m. to 12 p.m. Community members must call to pre-register at 940-349-2585. Eligible community members are essential workers, those who have COVID-19 symptoms or have been symptomatic within the past 7 days.

There have been 31 deaths related to COVID-19 in the county.

Dallas County is reporting 14 additional deaths and 225 new cases of COVID-19. That brings the total case count in Dallas County to 7,904, including 191 deaths.

The additional 14 deaths reported today are being described as:

Of cases requiring hospitalization in Dallas County, two-thirds have been under 65 years of age, and about half do not have high-risk chronic health conditions.

Tarrant County is reporting 84 new cases of COVID-19, bringing the countywide total to 4,643 confirmed cases, including 130 deaths. According to county health officials, 1,586 people in the county have recovered from the disease.

Back in March, in response to the coronavirus pandemic, Texas’ highest court suspended evictions and debt collection. Now with the orders lifted, lawsuits can move forward, and by May 26, landlords could start evicting renters. Creditors can also again garnish money from bank accounts to satisfy consumer debts.

Ann Beeson from the left-leaning Center for Public Policy Priorities says that undermines both public health and the state’s economic recovery.

“This is absolutely not the time to be kicking people out of their homes, to be sicking debt collectors on families that are struggling to get food on the table.”

The order — signed by the nine Republican court justices — does safeguard federal stimulus funds from garnishment. There are also temporary protections blocking evictions from homes with federally backed mortgages.

Pier 1 Looks To Close For Good

Pier 1 Imports — one of America’s most prominent home-decor chains — is packing it in.

The company, known for its colorful housewares and wicker furniture, declared bankruptcy in February. The coronavirus pandemic forced temporary closures of its approximately 540 stores and dashed its hopes of a recovery.

“This decision follows months of working to identify a buyer who would continue to operate our business going forward,” Pier 1’s CEO and Chief Financial Officer Robert Riesbeck said in a statement. “Unfortunately, the challenging retail environment has been significantly compounded by the profound impact of COVID-19, hindering our ability to secure such a buyer and requiring us to wind down.”

Read the full story from NPR.

Dallas Small Business Continuity Funds Program Gets $26 Million In Requests, But only has $5 Million To Distribute

The city of Dallas received thousands of applications for its grant and loan program for small businesses affected by COVID-19, but demand has exceeded supply.

City officials say they got 3,900 within a week for the Small Business Continuity Funds program.

Applicants requested more than $26 million — but only $5 million of funding is available.

About 40% of applications are from businesses owned by women, and about 40% are owned by African-Americans.

To qualify, businesses must be based in Dallas and must show they saw a 25% drop in revenue due to COVID-19.

Businesses could start getting funding in mid-June.