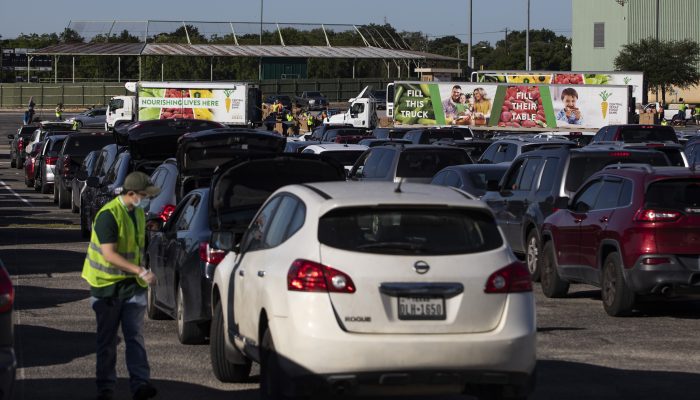 
We’ll be updating this story throughout the day Tuesday with the latest local news on the coronavirus pandemic. If you’d like to go through a roundup of COVID-19 news from Monday, read it here. If you have a news tip or question, email us at news@KUT.org.

On this Giving Tuesday, Capital Metro is highlighting ways to help musicians who have been impacted by the response to the coronavirus pandemic.

Cap Metro President and CEO Randy Clarke hosted a Facebook Live with Reenie Collins, executive director of the Health Alliance for Austin Musicians or HAAM. The group helps low-income musicians get access to health care. Collins said many are not only dealing with the closure of music venues, but also with the loss of jobs in the service industry on which they rely to make ends meet.

She said it took the music community in New Orleans a decade to recover after Hurricane Katrina, something she doesn’t want to see happen here.

“HAAM has really been involved at multiple levels, with lots of different organizations, a lot of different city folks looking at what can we do, how can we help,” Collins said.

She said many musicians are turning to live streams, so people can help by donating. Meanwhile, Cap Metro is looking at ways to highlight local musicians once the immediate crisis is over, including possible performances near transit hubs.

In the meantime, Clarke encouraged the community to find new and creative ways to support musicians.

“[For] most musicians, the new normal is … months, if not a couple of years, before truly getting back,” he said.

Twelve people staying at the 187-bed shelter tested positive for the disease three weeks ago, prompting its closure for deep-cleaning.

The shelter will take the temperature of everyone who tries to enter; those with a temperature about 100.4 will not be allowed in. Residents will also be subject to temperature screenings when they leave.

Despite a promise from the state last month to drastically expand coronavirus testing, health officials in Austin-Travis County say the area is well short of the tests it needs to get a clearer picture of the pandemic’s impact.

Escott said recently Austin Public Health had tested 735 people in a two-day period. The health authority’s goal is to test 2,000 people a day before it considers easing stay-at-home policies and allowing businesses to reopen.

Update at 5 p.m. – Half of Texans who lose employee health plans during the pandemic will remain uninsured, study finds

If the unemployment rate reaches 20%, more than 2 million Texans will lose their health insurance during the coronavirus pandemic, according to a new report from the Urban Institute and the Robert Wood Johnson Foundation.

Anuj Gangopadhyaya, a researcher with the Urban Institute, said about half of Texans who lose employer-sponsored plans will remain uninsured. That’s primarily because Texas is one of the few states that has not expanded Medicaid to more low-income people through the Affordable Care Act, he said.

“One of the patterns that comes out of this is that the share of those who are losing their employer-based coverage that go on to become uninsured – that share is actually much lower in states that expanded Medicaid than in those that didn’t,” he said. “They just had another coverage option available to them on the table.”

The study found, for example, only 11% of Massachusetts residents who lose their employer-sponsored health insurance will remain uninsured – compared to 50% in Texas.

Advocates in Texas have been asking state leaders to consider expanding Medicaid during the COVID-19 pandemic.

Eckhardt said she and Austin Mayor Steve Adler plan on extending their order by Friday, but that she had hoped to work with local business owners to reduce risks at high-contact establishments like hair salons.

“We remain convinced as the Austin-Travis County public health department that Stay Home, Work Safe is our most proven, effective strategy to reducing the curve,” she said. “We also remain committed to working with our business community to finding additional strategies so that we can bring commerce back up.”

Eckhardt said she and Adler had been working with the Austin Chamber of Commerce on a draft plan with input from businesses.

“We will have subsequent orders on May 8. What they will be, I need to go do some more research and figure out,” she said.

Shortly after, Eckhardt told commissioners her last day on the dais will be May 12. She announced her intent to run for the Texas Senate seat vacated by Kirk Watson days after she and Adler canceled SXSW – and days before the first COVID-19 cases cropped up in the area.

Eckhardt will be succeeded by her predecessor, longtime Travis County Judge Sam Biscoe, and suggested she continue on voluntarily to ensure a proper transition.

“I do know the value of continuity and the incredible value of this team that has been working so incredibly well in response to this pandemic,” she said. “I’m so proud and honored to be a part of it, and if it is the will of the county judge, the director of emergency services and this commissioners court, I would like to continue as a volunteer.”

Update at 4:04 p.m. – Austin to decide later this month on how to spend federal stimulus money

When the federal government approved a $2 trillion stimulus package in late March, that included a fund to help states and cities respond to the COVID-19 pandemic.

The City of Austin will be receiving roughly $283 million from the federal government to help local businesses and residents weather the crisis.

The city’s deputy chief financial officer, Ed Van Eenoo, said about $170.8 million from the Coronavirus Relief Fund is already in the city’s bank account. It can be used for the city’s public health response, including to pay public health workers and to support businesses.

Council members agreed Tuesday that they will talk about how to allocate this money at their meeting May 21.

The Austin Community College Board voted this week to extend its emergency declaration until Sept. 14. The resolution lets ACC officials continue applying for waivers and providing support needed to teach and learn remotely during the pandemic. That could mean introducing more resources like proctoring and tutoring services.

Since moving classes online through the summer, ACC has given students laptops to work from home, temporarily changed its grading system and made the internet accessible from its parking lots.

Update at 2:24 p.m. – Austin says COVID-19 is spreading among people working outside their homes

Austin public health officials say they are tracking clusters, where at least three people have contracted COVID-19 from the same location, among people who work in health care, construction and in grocery stores.

“We seem to see clusters around people who are working right now,” Dr. Mark Escott, interim medical director for Austin Public Health, told City Council members Tuesday. Escott said the public health agency is trying to attach what occupation information it has about patients to hospital records to track whether the coronavirus is spreading at certain workplaces.

Two weeks ago, Austin Public Health confirmed people working in construction, one of the industries allowed to continue for most of the pandemic, had tested positive for COVID-19.

“We are working to do some targeted testing at construction sites, as well, because we know that’s a hotspot right now,” Escott said Tuesday.

Update at 9:49 a.m. — Gov. Abbott will give an update on the state’s coronavirus response today

Watch the news conference on KUT.org starting at 2:30 p.m.

Hundreds of local nonprofits are asking for donations today as part of Giving Tuesday. Organizers are hoping the pandemic will spur the generosity of those around the world to help where they can, if they can.

In Austin, I Live Here I Give Here is corralling donations for more than 750 nonprofits that partner with the organization through its annual Amplify campaign.

Kathy Smith-Willman, the group’s board chair, said nonprofits have had a double hit of lower donations and a bigger need for their services during the crisis.

“It’s very different right now,” she said. “Our nonprofits have had to really pivot, a lot of them, what they’re doing in this time of COVID-19 and one of the things that they tell us what they need is flexible, immediate funding.”

That’s critical, because many nonprofits are funded by grants that have milestones or restrictions on what they can do with the funds. The worldwide effort, Giving Tuesday Now, lasts all day today.

Catch up on what happened yesterday

Austin and Travis County say their local actions are consistent with Abbott’s new order, which requires people to “minimize social gatherings and minimize in-person contact with people who are not in the same household.” Previously, the exception to that rule was to access essential services, but now the exception includes accessing the newly reopened businesses, according to a press release from the city and county.

The local orders expire May 8, but officials plan to extend them later this week with some modifications that comply with Abbott’s order, according to the release.

Austin and Travis County will still require people to use face coverings in public, they said, but under the state rules they cannot enforce the requirement through civil or criminal penalties.

“The real penalty for not wearing a face covering in Austin is that more people will get sick and some of them will die,” Mayor Steve Adler said.

Other local coronavirus news from Monday:

If you need help paying your monthly rent, you can apply for the City of Austin’s $1.2 million fund for one-time emergency rental assistance starting Monday at 9 a.m. through 11:59 p.m. Wednesday. The Leander Independent School District has moved its 2020 high school graduations to July 9 through July 11. The district says it will choose from among three potential commencement scenarios based on logistics and guidance from public health officials. If you or someone you know is struggling to provide food for a pet, the Austin Humane Society is holding a Pet Food Pantry event Tuesday from 10 a.m. until 4 p.m. at 124 West Anderson Lane.

If you find this reporting valuable, please consider making a donation to support it. Your gift pays for everything you find on KUT.org. Thanks for donating today.

About the Author: KUT Staff