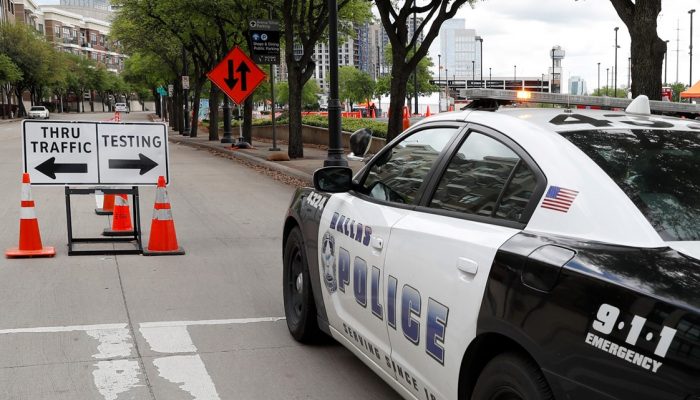 More than 25 first responders in North Texas have tested positive for the novel coronavirus.

A Dallas police officer has learned about a positive COVID-19 diagnosis one month after the initial test results were lost, officials say.

The officer, who works at the northeast patrol division, learned of the diagnosis on Wednesday, according to Dallas police officials.

This is the 13th Dallas police officer to contract the novel coronavirus. A dispatcher and public service officer have also tested positive, bringing the department’s total case count to 15.

March 19: The officer’s last day on the job. They left work early after experiencing symptoms. The officer begins quarantining for 14 days or until further notice.March 25: The officer went for testing and remains in quarantine while waiting for test results. That same day, the officer is notified that test results are lost.April 13: After 25 days of being quarantined, the officer is cleared by the department’s medical team to return to work.April 21: At the urging of a primary care physician, the officer was given a blood test to see if the individual had been positive and if antibodies were present.
April 22: The officer learns about the positive diagnosis from weeks ago and that the antibodies are present. The officer has decided to donate plasma to help others who have tested positive.

According to a news release sent by the Dallas Police Department, there are currently nine officers self-quarantined. The department says 130 officers so far have completed a quarantine period during the pandemic.

More than 4.4 million laid-off workers applied for U.S. unemployment benefits last week as job cuts escalated across an economy that remains all but shut down, the government said Thursday.The mayors of Dallas and Fort Worth want to honor the sacrifices of those working on the front lines during the COVID-19 pandemic on “Thank you Thursday.” At 7 p.m.m residents are encouraged to give outdoor ovations to frontline workers.Beginning Thursday, Dallas Parks and Recreation will employ new guidelines to try and decrease the foot-traffic volume on Katy Trail on days of the week that tend to be busier. Access to the trail will go by last name, click here for details.

Beginning Friday, the City of Arlington will conduct free drive-testing for COVID-19.

Tests will only be performed by appointment between the hours of 9 a.m. to 4 p.m. Monday through Friday.

Residents must have a fever over 99.6, cough or shortness of breath and one of the conditions below to meet the testing criteria:

Officials say the testing location will be provided once the appointment time slot has been confirmed.

Additional instructions on how to set up a testing appointment can be found here.

North Richland Hills officials announced the city plans to make budget cuts due to economic loss from the COVID-19 crisis.

Budget cuts will be made for all full-time employees, officials said in a news release Thursday.

The City will also close non-emergency operations on May 1, 8, and 15 to save money.

During those days, public safety operations won’t close but employees in the departments will take three days off.

Select stores and restaurants at NorthPark Center in Dallas will resume sales Friday under the “retail-to-go” program.

Under Gov. Greg Abbott’s executive order, beginning April 24, non-essential businesses are allowed to sell items that can be picked up curbside or delivered.

Shoppers will need to follow the protocol listed on the NorthPark Center website when picking up items.