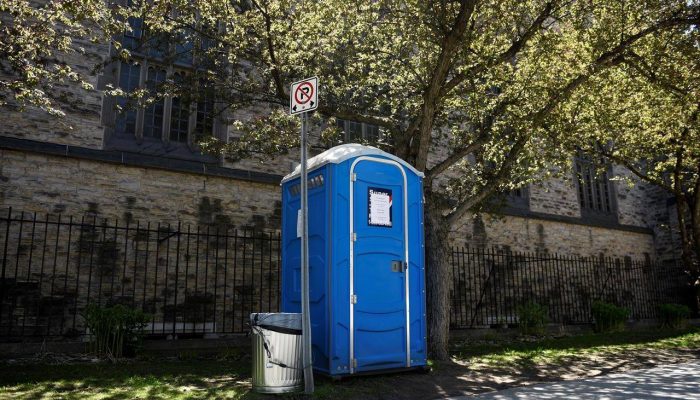 The COVID-19 pandemic is highlighting the need for more public toilets in communities across Canada, particularly as softening restrictions encourage people to spend more time outside their homes, advocates and experts say.

The health crisis is drawing broader attention to an issue that has long been a barrier for racialized, trans and disabled people, as well those dealing with homelessness or poverty, the experts say.

Scarce access to washrooms was recently raised as a hurdle for essential workers, such as transit and truck drivers who could no longer rely on coffee shops and other businesses once those were ordered closed.

In the early days of Ontario’s lockdown, Toronto Mayor John Tory pleaded with shuttered businesses to allow essential workers to use their bathrooms.

But as some provinces begin to reopen their economies — and residents increasingly venture outside — the demand for restrooms will rise, even though commercial facilities will remain largely off-limits, said Lezlie Lowe, author of “No Place To Go: How Public Toilets Fail Our Private Needs.”

“We don’t have this tradition of on-street, accessible, paid-for-by-municipal-governments bathroom provision. What we have in Canada is, we have Starbucks and Tim Hortons and McDonald’s and the other cafes and restaurants involved that we go into,” she said.

With those still out of commission, “people are going to have a sort of slap in the face and realize, ‘Oh my god, I was making do all this time with these publicly accessible toilets,’ and now people will hopefully start to realize how bad it is,” she said.

The dearth of public toilets could also undermine the economic recovery by preventing people from staying out longer and spending more money, Lowe said.

Some Canadian cities, including Toronto and Ottawa, have installed temporary portable washrooms and handwashing stations to help offset the closure of commercial and civic spaces.

“The city continues to explore opportunities to locate additional portable toilets and handwashing stations at strategic locations across the city,” Toronto Coun. Joe Cressy wrote in announcing the new facilities earlier this month.

In Prince George, B.C., municipal officials have reopened public washrooms in a downtown plaza for the duration of the pandemic, with the facilities in operation and monitored in the mornings and evenings.

While so-called porta-potties serve an important purpose, they don’t fulfill the same range of needs as permanent facilities, which are often used for child care, administering medication and other things, said Emily Scoular, who wrote her master’s thesis at the University of British Columbia on public washrooms.

The costs of building and maintaining public toilets have typically been a deterrent for municipalities, but Scoular said the current situation shows a need to rethink how much of that responsibility has been relegated to private business.

“You’re asking people to be healthy, leave their homes, get exercise, participate in the public realm, and I think the city and city facilities need to kind of come and meet us on that,” she said.

“I know Toronto and Vancouver are closing streets to allow (physical) distancing, and that’s one thing that encourages people to leave their houses, but another is making sure needs are met.”

For some advocates whose calls for more public toilets vastly predate the pandemic, the attention recently given to the issue is an encouraging first step.

“Maybe this is what it takes to get some serious attention paid to public health, including toi­lets,” those behind Ottawa’s ”GottaGo!” campaign wrote in a recent op-ed published in a local community newspaper.

“A crisis can be an opportunity, so now is the time for all of us to advocate for a network of public toi­lets that include running water and soap for handwashing.”