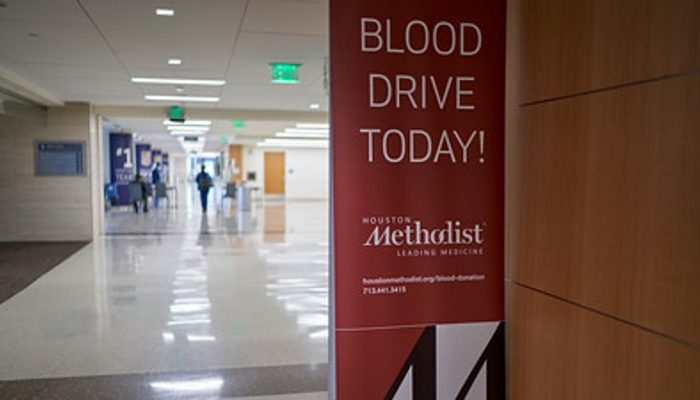 
It’s is too soon to say for sure that the recoveries were aided by the therapy, but the doctor overseeing the treatment says it’s a hopeful sign.

More than 30 gravely ill patients who took part in an experiments treatment for COVID-19 at Houston Methodist Research Institute have recovered from the illness and have left the hospital, the physician overseeing the therapy said Friday.

“All of these people were very, very sick,”  Dr. James A. Musser, chairman of the department of pathology and genomic medicine at Houston Methodist Hospital, said in a phone interview. “Many of them were on ventilators. That was the common theme.”

Houston Methodist will set up a special area for recovered COVID-19 plasma donors to give their virus-fighting antibodies for the use of critically ill patients in a first-of-its kind study here. (Photo: Courtesy of Houston Methodist.)

It cannot be said with certainty the treatment in which plasma donated by people who had fully recovered from the illness caused by the contagious and sometimes deadly coronavirus and injecting it into those still sick was responsible for recoveries, Musser said.

But it appears to be a hopeful sign, he added.

“It’s very, very early to know that,” Musser said. “I think it’s fair to say at this point that this is a safe strategy. That’s always going to be question No. 1: Is this safe?

“And we can now say in pretty much a straight-forward fashion that yes, this is safe and we should proceed onward.”

With no approved vaccine or proven treatment for COVID-19, Houston Methodist was among the first medical centers in the nation to get the go-ahead to conduct the therapy that has its roots in 19th-century medicine.

The treatment known as convalescent antibody therapy dates back to the 1890s. It “was the only means of treating certain infectious diseases” before more advanced treatments for viral outbreaks began emerging in the mid-20th century, according to a March 13 report in the Journal of Clinical Investigation.

Under the food and Drug Administration guidelines, the therapy will be used only on a case-by-case basis for people who are extremely ill and perhaps near death.

Some 200 former patients are now donors at Houston Methodist. About 20 people undergoing the therapy remain hospitalized.

Conner Scott recovered from COVID-19 and now donates plasma that might help patients who are seriously ill with the virus. (Photo: Courtesy of Houston Methodist)

Determining the procedure is safe is a step toward to expanding its use to others who might not be as sick as those who first received the therapy, Musser said.

Most of the people who received the therapy were older than average, and had underlying medical problems, he said.

Experts are still seeking to determine the types of patients who appeared to have benefited from the therapy and they types who did not.

“And that will hopefully provide some scientific medical guidance as to future treatments,” Musser said.

More: Surviving coronavirus: How some Texans are using their recovery to help others still sick

More: Coronavirus may last 2 years, study warns. And its second wave could be worse.