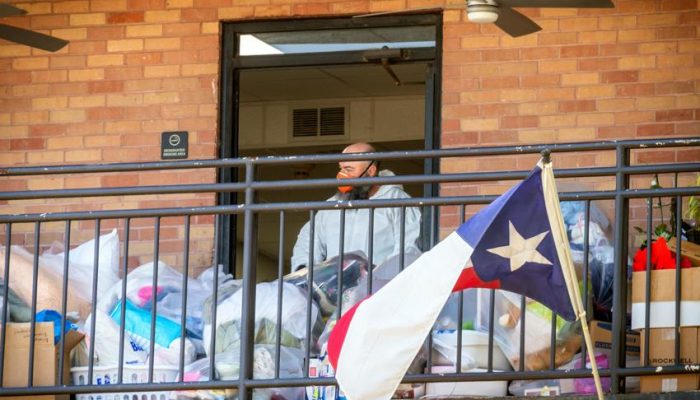 
Eight cases of COVID-19 have been confirmed in Gregg County senior living facilities, but the location of two of those cases is a mystery.

That’s because county health officials — as well as state officials — aren’t identifying facilities with cases involving residents or health care workers. If those facilities don’t self-identify, the public remains in the dark.

And the level of transparency among nursing homes and other such facilities can vary from county to county.

The Texas Health and Human Services Commission, which oversees the nursing home industry, has cited the federal privacy law HIPAA as well as the Texas Medical Records Privacy Act in not releasing the names of facilities where COVID-19 cases have been identified. State officials say the law constrains the release of most details.

But advocates, family members and others say revealing the names of facilities where cases have been identified are in the public interest.

In Texas, the only data being released by the commission regarding nursing homes is how many facilities throughout the state have confirmed cases and a total number of resident deaths. This information has been released to the media through a mailing list and is not posted publicly.

“Depending on where you live, you will see a different response,” said Patty Ducayet, the state’s federally mandated long-term care ombudsman since 2007.

The first confirmed coronavirus cases in a Gregg County nursing home were reported Wednesday with six cases linked to Highland Pines Nursing and Rehabilitation Center in Longview and two other cases tied to assisted living facilities not identified.

And Dr. Lewis Browne, the county’s health authority, said Saturday that one of those patients — a woman in her 70s — has died at a local hospital, marking the first COVID-19-related death in Gregg County.

Browne didn’t idetify the nursing facility where the woman resided.

The News-Journal reached out to Gregg County nursing, assisted living and rehab facilities to ask if they have confirmed cases.

Administrators at several facilities, including Highland Pines, didn’t return phone calls or voice messages requesting comment. Other facilities, such as Parkview at Hollybrook and Pine Tree Lodge Nursing Center, declined to say if they have any cases and cited federal privacy laws.

Longview Hill Assistant Administrator Ross Bradfield said, “We’ve been very fortunate. At this time, we have not had any cases.”

Buckner Retirement Services is providing updated information concerning COVID-19 on its website at bucknerretirement.org . Anyone can go to the page, click a popup that appears in the bottom right corner and find a chart that lists the number of cases or persons under investigation (PUI) at any of its six facilities, including Westminster Place in Longview.

“We’ve got full transparency,” Buckner International Media Relations Director Chris Ruth said. “So, for instance, if we were to have a person under investigation, we would update that timeline with the date that the person — resident or staff — was designated as a person under investigation test pending, and then once we found out the results of the test, we would update it with that.”

Westminster Place has “not had a single (person under investigation) much less a positive case,” Ruth said.

At Highland Pines, a company based in the Dallas-Fort Worth area has started to clean the facility.

Tony Fikes, CEO and founder of Fikes Infection Control in Grand Prairie, said this past week that Highland Pines needs to get back to a baseline clean.

“They got hit hard enough that they actually are utilizing our service to basically do a complete environmental reset,” he said.

He described the company’s approach to sanitizing the facility as a three-step process, including spraying surfaces and items.

The last step is to apply a “bioshield” on the surfaces.

“I applaud these people who are protecting our elderly and how hard they are working,” he said.

Browne said nursing homes and other such facilities have voluntarily reported positive cases, although he is not identifying them.

Longview Mayor Andy Mack described his concern level as “very high” with regards to the probability of the virus spreading in closed spaces such as nursing homes. Those are areas where the most precaution must be taken and that there can’t be any leeway with it, he said.

“It has to be strict quarantine for those areas because as we’ve seen in every part of the country — not just Panola County — when the virus starts spreading in the nursing home, it becomes a really, really big issue,” Mack said.

Julie Leming’s mother was a resident of Oakwood House senior living facility in Marshall. She tested positive for the coronavirus but has since been declared recovered.

“I just feel like they have been secretive about everything,” Leming said. “What they’re saying is the (state) department of health is telling them they can’t tell how many patients or staff members (are positive). That doesn’t make sense to me if Heritage House and others (such as Carthage nursing homes) are giving numbers and are subject to the same (regulating agency).”

Oakwood House CEO and President Chris Landers confirmed April 9 that the facility did have one case of COVID-19. At the time, the patient was not at the facility and was in a hospital.

Since then, Landers has declined to update case numbers, citing federal privacy laws as the main reason. The facility did release a document from Texas Health and Human Services in which inspectors came to Oakwood House on April 13 to 16 and found no violations during a focused infection control survey.

Heritage House in Marshall and Rehab Center announced April 14 on its website that a patient and health care worker tested positive. Calls to the facility seeking the current number of confirmed COVID-19 cases at the facility were not returned.

Marshall Manor Administrator Linda Benson said, as of Thursday, the facility had no confirmed cases. The facility has put safety measures in place similar to the majority of nursing homes and assisted living facilities.

At Marshall Manor West, family members are concerned that information was released more quickly through social media and through chatter in the community than by the facility.

Heidi Hoyer, whose 94-year-old mother has Alzheimer’s and lives at Manor West, said she received a letter from the facility April 24 that stated there were “four more” positive cases of coronavirus inside the facility.

“I was shocked to receive a note about four more cases because we were not told before that there were any cases,” she said. “That disappointed me.”

Terry Sims, whose 70-year-old sister also lives in Manor West, also was concerned when she began hearing of cases of COVID-19 at the facility. On April 28, Sims’ family received a call from a nurse who said her sister had tested positive.

Sims’ family has not been given an answer on how many residents or workers at Manor West have the virus.

The situation in Carthage is different for families seeking transparency about COVID-19 cases in nursing and senior facilities.

One non-caretaker staff member at the Carthage Healthcare Center tested positive for in mid-April. That facility immediately notified families. Taylor Pittman, spokesman for SLP Operations, said transparency has always been important to the company.

“We know this is a very challenging and scary situation for our residents, their families and our employees,” she said in a statement. “From the very beginning of this crisis, we made it our mission at Carthage Healthcare Center to be transparent and available to our residents and their loved ones around the clock. The same level of comfort and care that we give our own families is what we strive to provide for our employees, residents and their families every single day.”

Briarcliff has been hit particularly hard by COVID-19, with at least 66 active cases and six deaths as of Friday. The facility said it believed it was important to be transparent about how the virus has spread.

“In an effort to communicate transparently with our residents, our families, our staff, and the community, Briarcliff elected to place the COVID-19 banner on our website to show how the virus has affected our residents and staff,” the company said in a statement. “While doing so isn’t a federal, state, or local mandate, we believe that it is the right thing to do.”

Pat Souter, a lawyer who represents health care institutions and oversees health care studies at Baylor University’s law school, said Texas entities are correctly following state law by not releasing detailed information. Other states providing such details “may not have the same level of protections,” he said, “or determined that such release was permissible under an exception to their laws.”

The Freedom of Information Foundation of Texas wrote to state officials this past week that they had wrongly interpreted state law, saying the health commission had taken “a position without legal precedent.”

Advocates, family members and more than 60 state lawmakers, including members of both parties, also urged Abbott to identify facilities and their number of cases, overruling privacy laws in the public interest during a national health crisis.

New guidelines announced this month will require nursing homes, which are funded by public insurance programs and regulated by the federal government, to inform residents and their families within 12 hours of a COVID-19 case, as well as notify the Centers for Disease Control and Prevention. U.S. health administrators have not said when that will take effect.

The rules also would not apply to assisted living centers, which are paid for privately and overseen by the state.

About the Author: Longview News-Journal