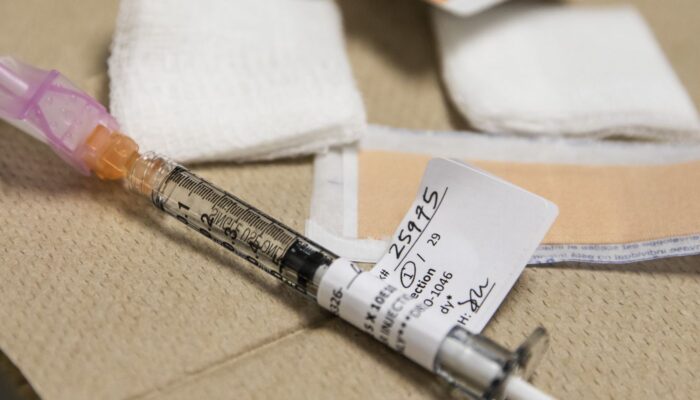 
As the coronavirus pandemic continues to devastate the health and economic stability of countries around the globe, COVID-19 vaccines are being developed at record speeds by researchers and pharmaceutical companies rushing to meet the urgent and widespread need.

This week, officials announced that Chicago and Illinois will receive its first doses of the vaccine, developed by drugmakers Pfizer and Moderna, later this month. Both vaccines require two doses to be maximally effective; Pfizer’s two shots must be administered three weeks apart, and Moderna’s requires four weeks between doses.

Here’s what we know now about who will receive the vaccine, how it will be distributed, and what lies ahead.

How many doses of the vaccine will Chicago and Illinois receive?

Current estimates project that no more than 20 million doses of each vaccine will be available in the country by the end of 2020, according to the Associated Press.

Illinois Gov. J.B. Pritzker said Tuesday that he anticipates the state will receive about 109,000 doses of the vaccine in the first shipment from the federal government within the next few weeks.

Chicago expects to receive the 20,000-to-25,000 doses of the coronavirus vaccine in that first shipment by the third and fourth week in December, Health Commissioner Dr. Allison Arwady said Tuesday. Once the distribution pipeline is in place, roughly 25,000 doses of Pfizer vaccines expected to arrive every week, with Moderna vaccines to follow. From there, Arwady said the city expects to “scale up rapidly.”

But Pritzker cautioned that federal authorities are constantly updating the number of potential vaccinations that could be Illinois-bound.

Who will get the COVID-19 vaccine first?

Chicago health officials were even more specific: First in line will be Chicago’s 37 hospitals so they can at least begin the job of vaccinating their “highest-risk” health care workers, Arwady said.

Priority will be given to those health care workers who are “seeing COVID patients” and those “performing procedures that put them at highest risk,” according to Dr. Carla Robinson, a medical director at the Chicago Department of Public Health.

The first round of vaccines will also go to employees of Chicago’s long-term care facilities. That includes both skilled nursing facilities and assisted living facilities.

Who will be next in line for the COVID vaccine in Illinois and Chicago?

Who comes next after health care workers will depend on federal guidelines issued by the Centers for Disease Control and guidance from the National Academies of Science, Medicine and Engineering.

It’s likely to be: first-responders at highest risk of exposure; health care workers who are not affiliated with a hospital or health system; residents of long-term care facilities; people with underlying conditions; residents over 65 and essential workers.

In Chicago, Arwady said the city does not anticipate, “at this point,” vaccine allocation by neighborhood.

“We want to make the vaccine widely available,” she said. “It will be prioritized based on risk.”

The ultimate goal will be to vaccinate at least 70% of the general population to achieve what’s known as “herd immunity.”

About the Author: Sun-Times staff