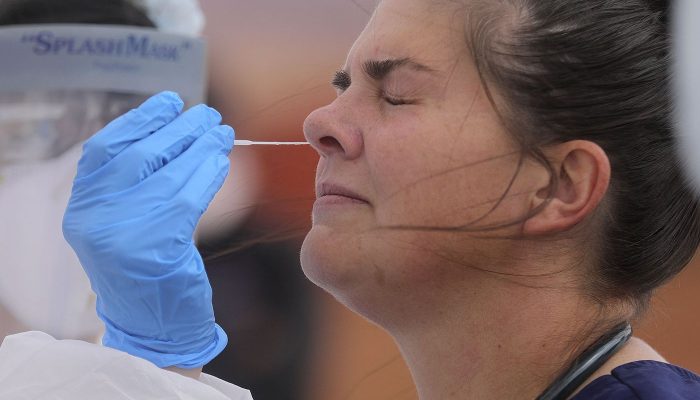 
SALT LAKE CITY — After a month spent critically ill with COVID-19, Cynthia Lemus on Thursday was wheeled out of the hospital while care providers lined the halls, cheering her on.

The 24-year-old Magna woman’s release from Intermountain Medical Center came after weeks hooked up to a ventilator and ECMO machine, which is similar to a heart-lung bypass machine. During that time, her family members waited with bated breath, unable to see her in person due to strict, pandemic-era visitation rules.

For Lemus, “I kind of just feel like I took a little nap, then I woke up.”

For her husband, Moises Lemus, “I can honestly say when I saw her being wheelchaired out, my heart dropped. It was like she was walking down the aisle again, tears were coming out. It was a surreal experience because for such a long period of time, we didn’t know what was going to happen.

“And so just to see her smile and dimples showing, and really being excited to see us all … it was just amazing.”

Cynthia Lemus, who was critically ill with COVID-19, is released from Intermountain Medical Center in Murray on Thursday, April 30, 2020, days after she received a convalescent plasma treatment.

Cynthia Lemus became Utah’s first recipient of a convalescent plasma transfusion on April 17 after other treatments hadn’t pulled her out of critical condition. The hope behind the nationwide clinical study is that antibodies in recovered donors’ plasma might help the most serious patients fight off the virus.

Though Lemus’ voice and body feel weak, and she expects a long recovery, she says she looks forward to being “fully to myself again.”

While it’s too early to know how big a part the plasma treatment played in Lemus’ healing, all patients who have so far received it are in the recovery process. But their and Lemus’ recovery is being attributed to a combination of supportive care and multiple therapies, said Dr. Brandon Webb, head of Intermountain’s COVID-19 therapeutics team.

The greatest challenge to getting the plasma treatment to patients who need it most lies in donors coming forward, Morris said.

Those who have tested positive for COVID-19 and have been symptom-free for at least 28 days — and who fit the Red Cross blood donor qualifications — can apply at redcrossblood.org. All donations are taken by appointment at Red Cross donation centers.

Each donor can donate two or three plasma units during one appointment, meaning they can help up to three patients, said Dr. Walter Kelly, with the Red Cross.

“If they let me, I will definitely go and donate,” Cynthia Lemus said, calling herself and her husband, who also tested positive for the virus, “willing candidates.”

The same day Utah implemented a soft economic reopening and moved into its moderate-risk phase, the state reported 156 new cases of COVID-19 and no new deaths.

Friday’s case tally shows 4,828 have tested positive for the disease out of 112,558 tested. The overall positive rate now stands at about 4.3%. The state saw a 3.2% growth rate in cases Friday.

In Utah, 46 people have died with COVID-19 and 403 have required hospitalization at some point during the pandemic.

The Beehive State still has not released current hospitalization numbers, but Dr. Angela Dunn, state epidemiologist with the Utah Department of Health, said several days ago the department is working with hospitals to standardize reporting and release current numbers to the public. Those numbers could be released next week, Dunn said Friday.

The state deployed its first strike team to a residential facility in Utah County that cares for adults with intellectual disabilities where several staff members and residents recently tested positive for the virus, Dunn said. The team will offer nursing care, personal protective equipment and additional testing for residents and staff.

The name of the facility was not released due to patient confidentiality laws.

The strike team is part of an effort announced Thursday to handle outbreaks within communities while the economy reopens.

Officials also announced Friday that all state parks in Utah are now reopened.

The breakdown of Utah COVID-19 cases, hospitalizations and deaths by health district:

About the Author: Ashley Imlay