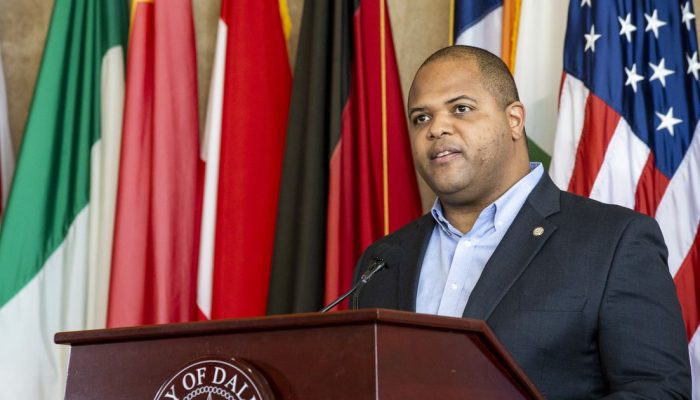 
About 25,000 Dallas residents who have been financially impacted by the coronavirus pandemic applied for help from the city to pay their rent or mortgages in the two days since signup began.

And close to 10,000 who are eligible will now wait to see if their number is called.

Demand was so high that the program was nearing capacity by Tuesday morning and the city shut down its online pre-screening tool at 11 a.m., the city announced in a news release.

A spokeswoman for the city said the program originally was going to accept applications until the end of the month.

About 1,000 households are expected to benefit from the program, said Eric Anthony Johnson, Dallas’ chief of economic development and housing and neighborhood revitalization.

Monday’s launch, Johnson said, was an “eye opening” moment that showed officials that Dallas residents are in serious need of financial relief.

“This is almost like the lines we’ve been seeing in the grocery stores for meat and toilet paper,” Johnson said. “If you take that demand and put it into the context of rent, that’s the demand we saw yesterday.”

Now the city is urging the federal government to release more money for its aid programs.

The Dallas City Council allocated about $13.7 million in federal money to the rent and mortgage assistance programs. Some households will receive up to $1,500 in aid for three months while others may get assistance for two years.

Individuals and families whose incomes were at or below 80% of the area median income were eligible to apply. A family of four, for example, would need to make under $66,500 to qualify.

The city announced in an update Tuesday that 9,966 eligible applicants would be moving onto the next phase of the process. Almost 25,000 residents had submitted applications by 11 a.m. Tuesday, when the online portal was shut down.

We had 9,966 applicants who, based on their answers, are eligible for the next phase of the process.

The city anticipates it can help about 1,000 households, but that number could change if there are more applicants with lower rent costs, Johnson said.

In a statement released Tuesday afternoon, the city urged the Department of Housing and Urban Development to release two other funding allocations for the rent and mortgage and small business assistance programs.

What can applicants expect now?

Applicants moving onto the next phase can expect a call from city staff to ask for documentation and to suggest which assistance program they may qualify for, according to the city’s guide to the program.

A case manager will then follow up to request any additional documents from applicants. The city will also conduct a home inspection before payments are made to landlords or lenders. The entire process could take up to four weeks.

Those hoping to get aid from the city will need to keep their fingers crossed and hope their applications are close to the front of the line.

“Submitting this pre-screening application survey is not a guarantee of assistance or a guarantee that you will receive a call for the next stage, as applications are processed on a first come first serve basis,” read a message received by applicants.

The city will need more resources, he added, if it is to expand the net to help more families beyond the pandemic.

“It’s going to require us to look beyond our normal resources to keep this going,” Johnson said. “Dallas couldn’t carry this thing by itself. The scale of money needed on a permanent basis would be enormous.”