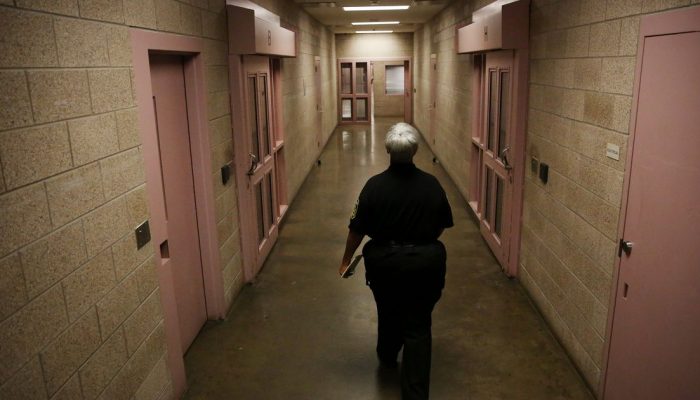 As the outbreak of COVID-19 began in the Dallas County jail, inconsistent information led to fear among jailers and inmates.

At first, a lieutenant told officers not to wear masks around inmates, said Emmanuel Lewis, a detention officer who testified in a hearing Tuesday stemming from a federal lawsuit filed against the jail by several inmates.

But then Lewis said he saw another officer in protective gear.

“Previously, we were told to not wear masks because it might spook the inmates,” Lewis said.

Lewis’ testimony highlighted confusion within the rank and file at the Dallas County Sheriff’s Department as top brass tried to handle the coronavirus outbreak, which was first publicly reported on March 25.

Attorneys for Sheriff Marian Brown defended her responses to mitigate the spread, which included new sanitation policies, lowering the jail population with some releases and asking local agencies to stop arresting people for low-level offenses.

The lawsuit, filed April 9, seeks to get medically vulnerable inmates released from jail. But the sheriff’s department, and now Gov. Greg Abbott and Attorney General Ken Paxton, have filed motions to dismiss the lawsuit.

As the hearing continues into its third day of testimony on Thursday, U.S. District Judge Ada Brown, who has no relation to the sheriff, is expected to rule as early as Friday. The judge could order the county to change its jail policies, which the sheriff could appeal to the Fifth Circuit Court.

During the hearing, the judge said “there is nothing more important” on her docket right now.

The hearing, which has included testimony from former inmates and a correctional health expert, highlights the urgency of the coronavirus pandemic in a setting with less than 5,000 inmates. It also comes as numbers at the Dallas County Jail continue to rise, with 80 inmates and 19 jailers testing positive for COVID-19 as of Tuesday.

Lewis, a first-year officer at the jail, said he was scared of retaliation for participating in the hearing. The judge told the officer that if he experienced retaliation to report back to the court.

The officer said that he had not received training on how to properly handle inmates during the pandemic. It wasn’t until after the lawsuit was filed, he said, that officers received masks.

Lewis said he’d been using his common sense and researched what he could about the virus.

When officers were told to not wear masks around inmates, Lewis said he was confused.

The pod in which he worked had up to 64 detainees using one sink. Inmates did not have direct access to cleaning supplies or masks, he testified.

Judge Brown asked about the availability of soap and hand sanitizer for inmates. Lewis said they are given three travel-sized bars of soap a week. As an officer, Lewis has access to a bottle of hand sanitizer that he would share with inmates in the pod.

David Jones, who was arrested in early March on a domestic violence charge, said when he was in the jail for several weeks, inmates were unable to maintain social distance in the south tower. Jones was released from jail on April 3.

Jones described an incident in the pod where another inmate began having a hard time breathing, which elicited an emergency response. Nurses rushed the inmate to the infirmary in a wheelchair.

Other inmates began to get agitated, Jones said, as they were waiting for several days to be seen.

“Depending on how severe the case is, is how fast you’ll get seen,” Jones said.

Due to the exposure, Jones testified that he was moved from the south tower and placed in lockdown in a single cell at the west tower, where he was not allowed to leave except for one hour a day. He described the single cell in the west tower at the jail as filthy. When he asked for cleaning materials, he was not provided with them, he said.

When Jones asked to get tested for the coronavirus, he was told his symptoms were not bad enough. When his temperature was checked, he had to crouch down to the open slot on the cell door so it could be taken via his ear.

“I was overwhelmed with worry and concern,” Jones said.

Ideare Bailey, who tested positive for the coronavirus while at the jail, became extremely ill and could not get adequate treatment, said his wife, Wykivia Bailey. She spoke at the hearing on his behalf because he is bed ridden from the virus. Ideare Bailey is diabetic, requiring insulin several times a day, she said.

Ideare Bailey, who was arrested on April 6 for theft of an ATM, was held on a $100,000 bond because of his previous criminal history. His wife called the jail and pre-trial services because she was concerned for his health. She said her husband did not receive insulin in jail. He then developed a 106-degree fever and was sent to the hospital in the jail’s north tower.

“I could hear he was sick,” Bailey said of her conversation with her husband while he was detained. “It was like he ran 10 flights of stairs. He was having a hard time breathing.”

Wykivia Bailey pawned her wedding wing and other belongings to pay his bail. When his bond was lowered, he was ordered to wear an electronic-monitoring bracelet, but employees who were supposed to issue it refused to see him, she said. He was eventually released on Monday evening.

Dr. Robert Cohen, a physician on the New York City Board of Corrections, testified that all officers should wear masks and gloves. Staff performing temperature checks should take extra measures and wear gowns, face masks, and an N95 mask, he said.

Cohen said that he believed medically vulnerable inmates should be released.

“This virus spreads rapidly in the jail,” Cohen said.

It’s critical for officers to receive training and updated guidelines during the pandemic, he said.

“The training is very important,” he said. “So they understand when to call for help.”