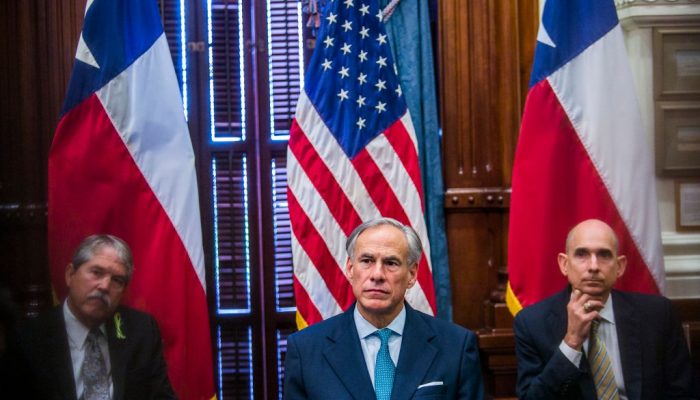 
When Texas Gov. Greg Abbott announced his plans to reopen the state eight days ago, he led his press conference with a powerful anecdote. Texas’ COVID-19 infection rate — the rate at which tests for the disease come back positive — had declined over the last 17 days, he said. This, along with other factors like deaths and the state’s hospitalization rate, were enough evidence to the governor that the time was right to reopen retail, restaurants and movie theaters in the state to 25% capacity.

During the week that followed the governor’s announcement, a differing reality emerged in Dallas County. Starting Tuesday, Dallas County repeatedly broke its record for most infections announced in a single day, culminating with more than 570 reported cases on Sunday and Monday.

In Dallas County at least, as County Judge Clay Jenkins repeatedly pointed out, the conditions didn’t exist to meet Centers for Disease Control’s guidelines for getting back to business.

The federal plan for beginning to reopen businesses calls for a 14-day decline in cases before diving in.

That clearly isn’t the case here, but, as some of the Observer’s Facebook commenters are all too eager to claim, the raw number of cases doesn’t really mean anything, because the county could be testing a greater number of people.

Abbott himself said that the number of cases in the state would likely go up as more tests became available. While Jenkins has said that Dallas County has not significantly increased its testing capacity, let’s set that aside and look at some of the numbers the governor said he’d be looking at.

Dallas’ infection rate appears to be much higher. The data isn’t there for an apples-to-apples comparison, but, for the seven day period that ended Sunday, the city reported 4,396 negative tests for COVID-19, according to its dashboard. Over the same period, Dallas County reported 1,684 new cases. There is no guarantee that every Dallas County positive result came from a lab in the city of Dallas, nor is it certain that every test conducted by Dallas lab was of a county or city resident, but the numbers are striking. One could throw out half the positive tests and still end up with an infection rate of over 16%.

Hospitalization rate: The best local resource for hospitalization numbers comes from the city, rather than the county. Dallas’ data shows ICU usage ticking up over the last week. On the day Abbott made his announcement, 63% of the city’s ICU beds were occupied. Monday, that number was 66%.

According to the city’s data, ventilator use over the last week is down. On March 27, 35% were in use. A week later, 34% were in use Monday.

Abbott’s orders include a carve-out for Texas counties that have reported less than five cases, allowing their businesses to open at 50% capacity, rather than 25%. Judging from the numbers, it seems like Dallas County could use an exception for the opposite reason.

It’s unlikely the governor would consider such a move, Rice University political scientist Mark Jones told the Observer last week, thanks, in part, to the elected leadership of Texas’ largest counties. The county judges in Dallas and Harris counties, the two hit hardest by the virus, have something in common.

“By definition, you’d be delegating power to Democrats,” Jones says.

The governor, for his part, has shown no signs of changing his mind about his decision. Monday afternoon, he tweeted out a poll in which the Texans surveyed approved of the way he was handling the pandemic and said that the state would continue to open its economy. Phase two of the governor’s plan, should he choose to go forward with it, is expected to be implemented May 18 after data from Texas’ first two weeks of reopening has been collected.

Thanks Texans for supporting our approach to the #coronavirus pandemic.

We will continue the combination of opening our economy while emphasizing your safety.

We must continue to slow the spread. #txlege https://t.co/m7wKauJbbC via @https://twitter.com/Tylerpaper