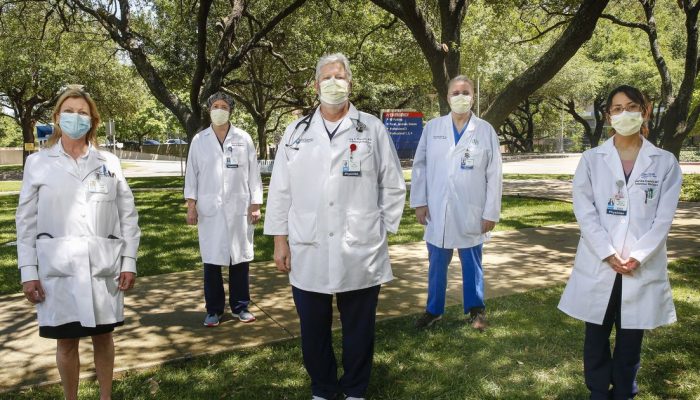 
By April 10, all eight of Dr. Gary Weinstein’s critically ill COVD-19 patients were improving, except for one.

Michael was a healthy 54-year-old and a father of three. He had fallen ill in mid-March after taking a spring break trip to Europe with two of his children. A few days after they flew home from Spain, he developed a fever, cough and body aches. Soon, he was having so much trouble breathing that he spent all night sitting up in a chair.

His wife drove him to the emergency room on March 17, and he was admitted directly to the intensive care unit. The next day, Weinstein, a pulmonologist and chief of critical care medicine at Texas Health Presbyterian Hospital Dallas, placed him on a ventilator, and that’s where Michael had remained.

“He was our first critically ill, unstable patient and was still really sick,” said Weinstein. “I wanted to do everything that might help him get better.”

Once COVID-19 patients are placed on life support, their odds of survival drop precipitously. Mortality rates for COVID patients on ventilators hover between 67% and 88%, based on statistics from Europe, China and New York City. The chances of recovery drop with every day that patients can’t breathe on their own.

So Weinstein and his colleagues knew they had limited time to help Michael get better. (Michael and his wife, Jackie, asked that their last name not be used to protect his privacy.)

The Texas Health Dallas team had already tried at least a half-dozen therapies. They had given Michael blood thinners to prevent clots, a potentially fatal COVID-19 complication; steroids to reduce inflammation, and the experimental drug remdesivir to slow the virus’s ability to replicate.

They had also administered the anti-malaria drug hydroxychloroquine with the antibiotic azithromycin, a combination that had received wide coverage in the media, but has not been proved safe or effective against COVID-19. Despite receiving the two drugs, Michael remained critically ill and unstable, Weinstein said.

Then they turned to a treatment from the history books. Convalescent plasma, antibody-rich blood donated by survivors of an infectious disease, was developed in the late 1800s to fight diphtheria. It was the subject of the 1901 Nobel Prize in Physiology or Medicine and has been deployed against measles, mumps and the 1918 Spanish flu.

“You learn about these things in medical school, and you say, ‘I’m never gonna use this. This is, like, the archaic practice of medicine,’ ” said Donna Casey, a primary care physician at Texas Health Dallas who is married to Weinstein. “But when you see a young healthy person in their fifties on life support, you start thinking about really creative things you can do to save them.”

More recently, convalescent plasma was used to treat Ebola patients, including at Texas Health Dallas in 2014. Weinstein cared for all three of his hospital’s Ebola patients, including Thomas Eric Duncan, who died after contracting the disease in Liberia. Nina Pham, a nurse who had cared for Duncan, received convalescent plasma from another Ebola survivor.

“That experience told us we can make things happen, even if we have to figure them out for ourselves,” said Dr. Allison Liddell, medical director of infection prevention and chief of infectious disease at Texas Health Dallas who cared for Michael and the Ebola patients along with Weinstein.

Despite its long history, convalescent plasma’s effectiveness remains unproven. COVID-19 treatment guidelines released on April 21 by the federal government concluded that “there are insufficient data to recommend either for or against” its use. A national research trial led by the Mayo Clinic in Rochester, Minn., which Texas Health Dallas joined last week, aims to collect quality data about the treatment’s safety and efficacy.

The story of how doctors worked to save Michael reveals how critical care teams navigate medical uncertainty, confronting a new disease with no proven treatments. It also illustrates the unpredictability with which SARS-CoV-2, the virus that causes COVID-19, strikes down the healthy, and offers hope that even the sickest patients can recover.

Weinstein first met Michael on March 18, the day after he was hospitalized. To visit him in his ICU room, the doctor donned an N95 respirator mask, a clear face shield that resembled a welder’s helmet, a blue bonnet, a gown, two pairs of blue gloves and blue shoe covers.

He described the equipment as a little less than what he wore with Ebola patients and a little more than he typically wears when treating patients with other infectious diseases.

Michael was sitting up in a chair, wearing an oxygen mask. Though the mask was delivering 100% oxygen, Michael was panting. That rapid breathing, Weinstein knew, would soon fatigue his muscles and send him into respiratory failure. He told Michael that he had come to place him on a ventilator and explained what would happen next.

Michael asked for a few minutes to speak with his wife, children and parents. When he asked Weinstein how long he would be on the ventilator, the doctor said he didn’t know. “I could give you a time, but it would be a guess, and it would probably be disappointing to you,” he recalled saying.

From there, Michael only got worse. He required the ventilator’s highest setting to push air into his lungs. Doctors placed him in a special rotating bed that kept him on his stomach while ventilated – a position that helps oxygen pass through the lungs and into the blood. But each time doctors tried to turn him on his back, his oxygen levels fell dangerously low.

On March 27, with Michael’s prognosis looking bleak, Weinstein offered Jackie the chance to visit him at the hospital. It would be her first time seeing her husband since bringing him to the emergency room 10 days earlier.

Nurses escorted her in at 10:30 p.m., a quiet time with fewer staff and less crowding in the halls. She dressed in a mask, gown and gloves and entered his room. She saw him strapped into his RotoProne bed, his eyes closed, his face distorted and swollen. Her initial feeling was elation.

“I was so relieved to see him,” she said. “There’s nothing that should have been giving me relief other than he was there alive, and I could touch his shoulder and hand.” She returned home, went to bed and awoke at 1:30 that morning feeling troubled. She wondered how much more his body, or anyone’s body, could take.

They had hoped to find a COVID plasma program they could join, but none existed, so they built one from scratch. They reached out to Carter BloodCare, North Texas’s primary supplier of blood products, and forged a partnership. Then they put out a call for donors.

Their chances of success were slim. To qualify as a donor, a person needed to have tested positive for COVID-19 and then to have been symptom-free for 28 days. Given the shortage of testing, and the fact that Dallas’ first COVID-19 patient wasn’t diagnosed until March 10, the team wondered if they would have to bring in plasma from the coasts.

Michael’s doctors and his family broadcast the call through professional networks, relatives, and social media.

Casey called her own patients who had tested positive and then followed up on every contact she could. “I was calling people and saying, ‘Hi, this is Dr. Casey. Could I take your blood and give it to somebody else?’”

Dr. Liddell and a group of nurses created a spreadsheet that tracked every patient who had tested positive at the hospital or in its emergency room, plus community volunteers who reached out after hearing the hospital needed plasma. The list totaled approximately 250 people, said Doug Johnson, a clinical nurse leader at Texas Health Dallas who manages the list and screens potential donors.

About a week later, their calls reached the right person. Leonard Seiple of Lewisville fell ill in late January with symptoms that resembled those of COVID-19. Although he hadn’t traveled outside the state, he felt right away that he had caught something nastier than the flu.

Seiple, 56, who runs Dallas Business Realty, a commercial real estate company, developed chills, aches, fatigue and a terrible cough. He couldn’t sleep. His lungs hurt. He visited his doctor, who said he likely had the flu, and spent about 10 days recovering at home.

During his annual exam at a Denton Veterans Affairs clinic in early April, he told his doctor he believed he’d had COVID-19. “Do you want to find out for sure?” his doctor asked. She told him that Texas Health Dallas was looking for plasma donors. On April 8, Seiple visited the hospital to be screened. He tested negative for COVID-19 but positive for COVID-19 antibodies, indicating that he’d likely had the infection. In addition, his blood type was a match for Michael’s.

The next day, Seiple drove to Carter BloodCare in Bedford. He lay on a bed, and staff drew blood from his left arm, separated out the plasma – the pale yellow, liquid portion of the blood – and returned his red cells to his body.

On the evening of Friday, April 10, doctors infused two units of Seiple’s plasma into Michael.

He broke the news to Jackie by calling her on FaceTime, then flipping the phone around so she could see Michael. “I was flooded with joy and relief,” she said. “It took everything I had not to jump in the car and go over there.”

Soon he was regaining strength, talking and FaceTiming with his family on his own. On April 24, he was discharged from the ICU but remained in the hospital to continue his recovery.

Did convalescent plasma work for Michael? The timing of his progress suggests it may have, though Weinstein cannot prove it. “I won’t hesitate to use it again in sick patients that are not getting better,” he said.

Several other hospitals in North Texas, including Texas Health Harris Methodist Hospital Fort Worth, UT Southwestern, Baylor Scott & White Health and Medical City Healthcare have either used convalescent plasma or have protocols in place to do so. The treatment is now being rolled out in all 50 states.

Michael’s two sons, who traveled to Europe with him in March, contracted COVID-19, as well. One had no symptoms, and the other developed a mild case. Last week, they drove to Carter BloodCare and donated plasma for the next sick patient who may need it. Michael said he would like to do the same.

To be eligible to donate convalescent plasma, an individual must: