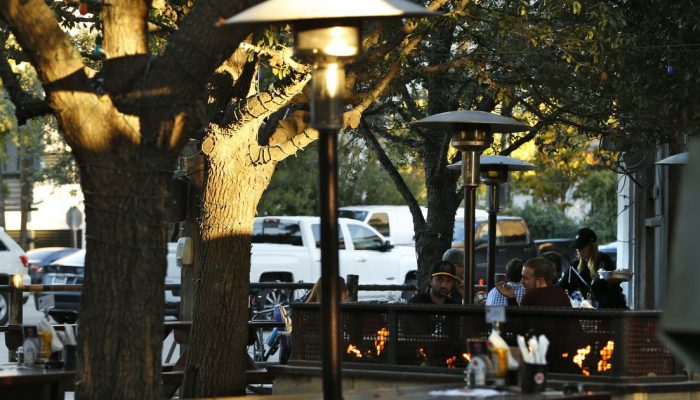 
Two Dallas businesses this weekend each were fined $1,000 for opening too early and violating emergency regulations over the coronavirus, a city spokeswoman said.

The Katy Trail Ice House, an Oak Lawn bar, and Planet Tan, a Far North Dallas tanning salon, were issued citations after they received warnings from code enforcement officers and failed to close by the time they followed up, city spokeswoman Roxana Rubio said.

Texas Gov. Greg Abbott’s orders allowed some Dallas businesses — such as stores, restaurants and movie theaters — to slowly reopen Friday at 25% capacity. Both businesses that were cited had been designated by the state as nonessential and were not allowed to open until the second phase of the state’s reopening — which is planned for May 18.

“We need businesses to be in compliance for everyone’s safety as quick as possible,” Rubio said Monday.

Planet Tan, located on Preston Road, declined to comment and directed The Dallas Morning News to its corporate media line. The company didn’t immediately respond to requests for comment Monday.

At the Katy Trail Ice House, Buddy Cramer, the managing partner, wrote that: “We did not open Saturday and we will remain closed until the governor dictates.”

Cramer, whose business was cited Friday, didn’t respond to a question about why the bar, which has an outdoor seating area, opened that day.

Council member David Blewett, whose Oak Lawn district includes the Katy Trail, said he believed the business owner had fallen into a gray area on the distinction between bars and restaurants, which are allowed to reopen at 25% capacity under the governor’s orders.

“They just decided it’s not worth the fight,” Blewett said. “They were going to go ahead and just delay until there’s more clarity. I support them on that.”

Rubio said Dallas code enforcement officers received 256 cases of alleged violations over the weekend. Of those, 61 were given warnings.

Overall the city received fewer 311 calls about emergency regulation violations this past weekend compared to the previous weekend, according to the city.

Mayor Eric Johnson has said he worries about the city’s financial burden of enforcing the state’s regulations. The city recently sued a hair salon, Salon a la Mode, when the owner chose to reopen early. In a memo to the city manager and city attorney, Johnson said enforcement has fallen to code compliance officers at a time when Dallas anticipates revenue declines.

“While I understand that the city has adopted the county’s emergency orders and must work to keep its mutual constituents safe, we also have to be cognizant of our own resources, especially considering the looming budget shortfall,” Johnson wrote Friday.

Council member Lee Kleinman, whose Far North Dallas district includes both Planet Tan and the hair salon that chose to reopen early, said he believes most businesses are taking the proper precautions.

But city officials won’t know until later this month whether the governor’s orders made a difference in the number of coronavirus cases, Kleinman said.

It was “disturbing” to see that Dallas County’s positive cases continue to climb every day, he said, though it’s unclear to him whether that’s due to better testing capabilities or a higher infection rate.

“People have got to comply with the governor’s orders, and we’ve got to enforce them,” Kleinman said. “Nobody can be too safe. … I personally think we have to be extremely cautious right now.”