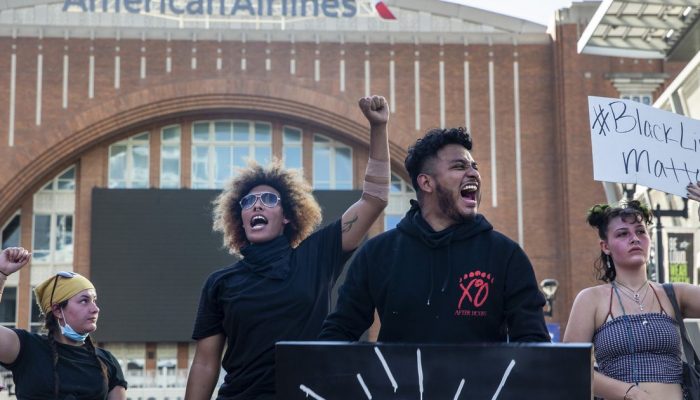 Protesters who have taken to the streets of Dallas and North Texas suburbs to rally against police brutality and racism qualify for a federally subsidized coronavirus test.

A pop-up testing site near American Airlines Center is expected to open Wednesday for protesters to walk up to get tested, a spokeswoman for Parkland Health & Hospital System said.

Dallas County Judge Clay Jenkins has encouraged protesters to seek a COVID-19 test from one of the several public testing sites that are managed in part by Parkland.

The county has classified protesters as having a high risk of exposure, which makes them eligible for the tests provided to the county by the federal government, Parkland officials said.

Parkland will tentatively shut down the drive-through testing site at American Airlines Center on Wednesday and Thursday afternoons to providing testing at a walk-up site nearby, which is expected to open at 2 p.m.

Because the county designated protesters as a high-risk group, any person regardless of age, job or symptoms may be tested. A person who wants to be tested must have a photo ID. He said the testing sites will not be sharing results with police or other law enforcement agencies.

Among the earliest interventions to stop the spread of the fast-moving coronavirus was a prohibition on large gatherings. The protests, which have attracted thousands of people to downtown Dallas for nearly two weeks, run afoul of those orders. In statements and messages on social media, Jenkins has stressed that protesters follow physical distancing standards and good hygiene practices.

Protesters are not heeding his advice. While many are wearing facial coverings and masks, they’re cramming into narrow streets and parks downtown.

The sites are co-managed by the city of Dallas, Dallas County, the state and federal governments. Protesters can receive a free test at any of these locations.

Changes to testing criteria and logistics are always subject to change based on the evolving nature of the coronavirus. Parkland officials suggested that if the walk-up site is popular, they could expand its hours.

The two walk-up testing sites in southern Dallas have hit the cap of 75 tests per day. Parkland did not know how many tests would be on hand at the walk-up site at American Airlines Center but said it could be as many as 300 per day.