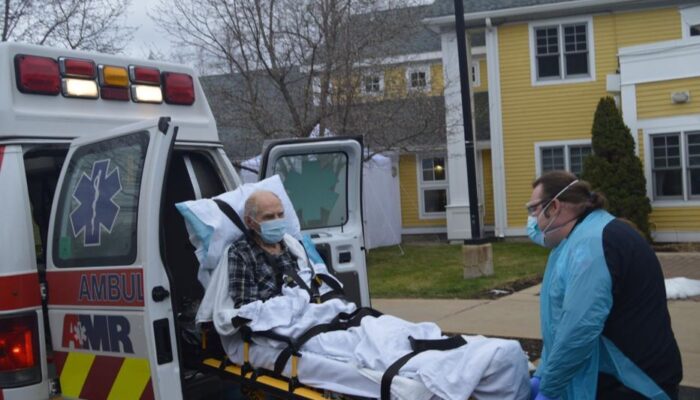 The 90-year-old Korean War veteran who couldn’t get the lifesaving antibody COVID-19 therapy used on President Donald Trump has nonetheless recovered enough that he left the hospital and returned home.

Family and friends were on hand Thursday afternoon as an ambulance dropped Jack Meisel off at the Arbors of Bedford, an assisted living community.

“Not bad,” he said when asked how he was feeling, before an attendant wheeled his gurney inside.

Health and Human Services Commissioner Lori Shibinette said her department has been discussing the treatment with provider partners, either existing hospital clinics or outpatient providers that will establish new clinics.

This week’s priority was making the infusion treatment available in nursing homes, and the first doses have been prescribed and administered, she said in an email.

On Dec. 27, Meisel ended up at the hospital, four days after his daughters struggled unsuccessfully to find a New Hampshire hospital to provide the monoclonal antibody treatment.

Administered to  Trump in October, the treatment involves intravenous infusion of laboratory-made proteins that attack the spike protein of the novel coronavirus and block the virus’ attachment and entry into human cells.

The treatment only works in early stages of COVID, and Meisel’s daughter found a Boston hospital that agreed to take him. But that effort collapsed when the Arbors could not find a service to transport her father to Tufts University Medical Center.

National media have reported about unused stockpiles of the treatment in hospitals.

On Thursday, the Washington Post reported that only 20% of 378,000 doses distributed to states and territorial health departments had been used. The newspaper reported that some physicians have doubts about the treatments, which are made by Eli Lilly and Regeneron Pharmaceuticals.

The time-consuming treatment involves infusion that lasts at least an hour and then on-site monitoring for adverse reactions. The Washington Post noted such work taxes hospitals that are already struggling with filled wards, sick COVID patients and vaccinations of their frontline health care workers.

Meisel’s daughter, Joyce Meisel of Concord, said she spoke to Shibinette after the New Hampshire Union Leader reported her plight. A consulting nurse, Meisel said she was pleased to hear about plans to open infusion centers in New Hampshire.

She received numerous offers of people, several who have recovered from COVID-19, to take her father to Boston. She took their contact information and promised to pass it along to future patients.

“I see such an outpouring of people willing to help,” Meisel said. “They want to know how can we make this health care system better.”

Joyce Meisel watches as her father, Jack Meisel, gets comfortable Thursday at the Arbors of Bedford assisted living home.

Had Meisel contacted the hospital where her father ended up – St. Joseph Hospital in Nashua – he could have gotten the treatment.

St. Joseph has been providing monoclonal antibody therapy out of its emergency room since early December, said the hospital’s chief medical officer, Dr. Alison Madden. As of Thursday, the hospital had delivered 30 treatments, two that day, Madden said.

“The logistics of it are a little challenging,” she said. The treatment must be provided in early stages and before hospitalization, and it is only for high-risk patients. And a emergency room is busy, can hamper the ability to administer the treatment promptly, she said.

Madden believes Meisel would have qualified for the treatment.

Area hospitals discuss COVID issues on a daily basis, and they discussed the situation with monoclonal therapies this week, she said.

“We’re working toward making this more widely accessible,” she said.

The hospital has not had any problems obtaining the monoclonal antibodies as of yet, but she cautioned that shortages and scarcities are a constant challenge with COVID-19.

The state’s largest hospital, Dartmouth-Hitchcock Medical Center, is not enthusiastic about the treatment. This week, the hospital’s acting chief medical officer noted that the Eli Lilly product, Bamlanivimab, must be administered in a negative air pressure room with staff immediately available to manage an infusion reaction.

In an email, Dr. Jonathan T. Huntington expressed a high degree of uncertainty of the benefits. The Infectious Disease Society of America urges that patients be informed about the risks and possible side effects.

“While we have the technical ability to deliver this therapy, its uncertain benefit, the considerable resources required to safely administer and small number of available doses, this is not a therapy that we are expecting to offer widely,” he wrote.

At St. Joseph Hospital, Meisel was treated with remdesivir and antibiotics. Upon arrival at the Arbors, he was whisked inside quickly, and his well-wishers visited at the window outside his room.

Joyce Meisel said her father calls COVID-19 “the virus” and is off oxygen, no longer coughs and has no elevated temperature.