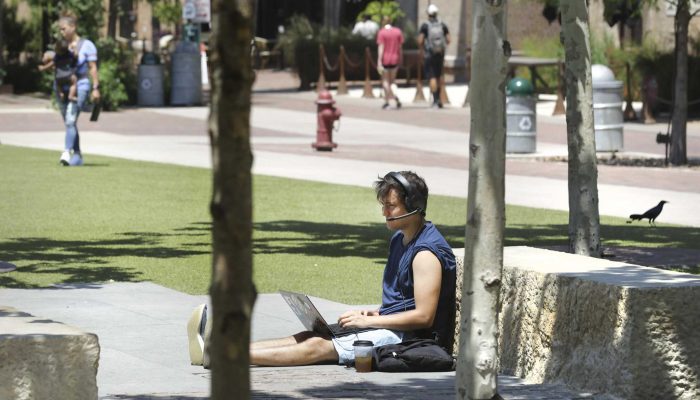 Downtown in the shadow of the coronavirus was a virtual dead zone Monday despite Gov. Greg Abbott’s tentative steps to reopen the Texas economy.

Most street-level restaurants, including once-bustling eateries such as La Panadería and Rosella at the Rand, remained closed, their owners apparently unwilling to reopen under the governor’s new order, which allows them to operate at 25 percent capacity.

Not that many would have come; the streets lay mostly empty at the lunch hour, save for a smattering of stray wanderers.

“Very little has opened downtown,” said Jessica Probost, owner of Royal Blue Grocery on Houston Street. “Without tourism and without all the downtown workers, it’s just not … office workers are not going back. I think most businesses just don’t feel comfortable yet. It’s not time. They’re not ready for it.”

As an “essential” business, Royal Blue stayed open through the shutdown. But “it almost feels slower since the reopening,” Probost said.

Beyond its urban core, the city was scarcely more vibrant.

Other than grocery shoppers — all donning face coverings — at Whole Foods and Trader Joe’s, the Alamo Quarry Market was largely deserted Monday afternoon.

“STAY SAFE SAN ANTONIO WE WILL BE BACK,” read a marquee on the front of the Regal Alamo Quarry, a movie theater that had yet to reopen despite the governor’s blessing.

Most of the stores were shuttered as well.

Shopping carts blocked the glass sliding doors that looked into the empty Nordstrom Rack. Just one vehicle waited in front of Pottery Barn’s curbside order sign. Sephora’s entire storefront was boarded up with black plywood — with the exception of a sign on each door reading, “A precautionary measure due to COVID-19.”

Learning Express Toys had opened its doors, but only three to six customers a day have come to shop there since Friday, said Cindy French, the store’s manager. Customers are screened with a contact-less thermometer and must wear a face covering to enter the store.

“I think a lot of people are still scared to venture out,” she said, adding that most of the store’s business is from curbside orders.

Richard Perez, president of the San Antonio Chamber of Commerce, said he expects that people will slowly begin to return to restaurants and retail establishments in greater numbers as fear of the virus begins to lift.

“I do think that is the key,” Perez said. “Because people are concerned still.”

Downtown, most businesses won’t see a boost until offices reopen, he added.

“My organization, everyone’s still working from home,” Perez said. “I think just about every single office downtown is doing the same — that is, everyone is working remotely — and not until they start coming back in greater numbers do I think other businesses will start opening up.”

Despite ongoing spread of the virus, Will Holshouser wasn’t too scared Monday to dine in at Fratello’s Italian Market & Deli for lunch. The local financier took comfort in the total number of confirmed cases in Bexar County — 1,652 as of Monday.

“When you look at the numbers of infections in Bexar County, we’re very low,” he said. “So the question is, playing the odds, what are the likelihoods that we would catch it, and what is the likelihood that I, as a healthy 40-year-old, would succumb to it? These are all very low odds. And so, I’m comfortable playing those odds.”

Inside the Broadway deli, tables and chairs were piled in a corner and covered with a black tablecloth, leaving space for social distancing. A sign on the entrance read, “You must wear a face covering at all times inside the building (except when dining at your table).”

But Holshouser and three of his colleagues, all in dress shirts and ties, had not brought along any masks.

Aaron Retersdorf, another well-dressed co-worker, emerged from the restaurant.

“So we’re trying to order,” he said. “You have to wear a mask when you’re at the table.”

A waitress came outside.

“How many of y’all don’t have masks, three?” she said, handing out some face coverings to the financiers. “I’ll give you these and grab another.”

A few blocks south, at the Pearl, a family of three strolled aimlessly on the street, removing masks made uncomfortable by the heat. Two sunbathers stretched on the green lawn — now open to the public after weeks of being roped off with yellow caution tape, but with a sign indicating that no more than 40 people are allowed on its surface.

But there was none of the hustle and bustle once typical of the Pearl district, home to numerous restaurants and hundreds of apartments for the young and affluent.

There was one change: a faint hum. It came from the Boiler House, which was playing music again and was one of only two restaurants that appeared to have resumed seating customers.

The other was Green Vegetarian Cuisine, where waitress Gabriela Gonzalez Rios, 20, was celebrating her first day back at work since the pandemic hit. She said she was laid off March 18. Last week, shortly after Abbott’s announcement, she got a call with an offer to return to work. She said over a dozen other former employees also were hired back.

“It’s so nice to see faces again that aren’t my family,” she said, wearing a white mask adorned with sequins.

Around 4 p.m. Monday, she said that only about a dozen people had entered the restaurant. The bulk of orders were still curbside or delivery.

“People are for the most part staying in. It sucks for us, but on the other hand, they’re following the rules and staying safe,” she said.

“We did like $6,000 in sales,” he said. “There were a lot of people from Austin, Laredo. Some people were coming in to do shopping from the small towns. They come in to eat on the River Walk.”

Outside Rainforest Café, a family of seven visiting from Fort Worth said they simply had to get out of the house.

So they had traveled south to the “packed” beaches of Port Aransas, then swung by San Antonio on the drive back home.

“My kids have literally been locked up in the house for a month and a half,” said Angela Robinson, 33. “And at some point I had to make a decision — ‘What do I have to lose here?’”

Her five children, all of them sunburned, stood around her.

“My kids, they need to see stuff,” Robinson said. “They need to get the hell out of there.”