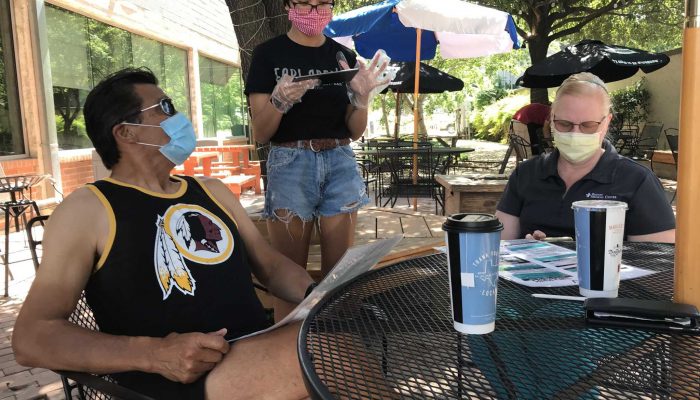 About a month ago, as the state began slowly to reopen, Metro Health Director Dawn Emerick warned her colleagues that an uptick in coronavirus infections was inevitable.

Known cases of COVID-19 are spiking, both in San Antonio and statewide. And judging by Gov. Greg Abbott’s own key metrics to guide reopening — the number of hospitalizations and the percentage of tests that come back positive — the situation here and across the state is worsening.

Nonetheless, Emerick was upbeat Monday about the trajectory of the epidemic.

“There’s nothing in San Antonio that’s really alarming us,” she said. “We are doing better than most. That’s not to say we’re complacent. We’re not complacent. We are watching.”

On Monday, 96 people were hospitalized in Bexar County, up six from Sunday. And the seven-day positive test rate — excluding Bexar County Jail — had grown from 3.5 to 4.6 percent.

Statewide, 1,935 people were hospitalized with COVID-19, more than ever before. The previous high was 1,888 on May 5. And this past weekend, the seven-day positive test rate across Texas was 7.55 percent, the highest since late April, according to data provided by the Texas Department of State Health Services.

The San Antonio numbers, at least, are no reason to panic, Emerick said.

“People are going to get sick,” she said. “What is important for us to look at is whether the hospital system is stressed. That is the entire reason we flattened the curve. Once it’s community spread, the best thing you can do is make sure that we’re not going to see these massive spikes.”

Hospital capacity has remained steady. On Monday, 38 people were in the ICU and 23 were on ventilators, far below the available number of ICU beds and ventilators.

The Metropolitan Health District recently completed testing of all residents and staff of the county’s 67 nursing homes. Counties across the state are undertaking similar initiatives by order of the governor.

“That’s a lot of testing,” Emerick said. “Keep in mind that we had some backlogs. All of that nursing home testing — you’re talking thousands of people that were tested in our nursing homes, and the labs just couldn’t keep up with it. So you had a huge backlog.”

Apparent spikes in new cases can be misleading, she said.

“That’s not a spike,” Emerick said. “That’s over a duration of time, but all the results came in at the same time. And when you count it, it makes it look like a spike, when it’s not.”

While the county reported 147 new cases Saturday, there were just 22 new cases Monday — four from community spread, one from the San Antonio Residence and Rehabilitation Center nursing home and 17 under investigation. There were no new deaths.

“Our doubling rate is 29 days,” Emerick said, referring to how many days it takes for the number of coronavirus cases to double. “That’s still really good. Yes, it’s come down from 36. But that’s still in the green zone.”

Another factor that can contribute to a heavier caseload is better testing. Texas MedClinic has started using antigen tests that can more rapidly detect whether someone has been infected by the virus, Emerick said.

“Nothing is alarming us,” she said.

For the past two weeks, people have packed the streets of at least 600 cities across the nation, including in San Antonio, to protest systemic racism and police brutality after the death of George Floyd in Minneapolis police custody.

When it comes to spread of the virus, the true impact of the protests — as well as the use of tear gas and other tactics by police that force protesters to cough and pack together even more tightly — won’t be known for about another week.

“These protests,” Emerick said, “give us another seven to 10 days, and we may see something.”