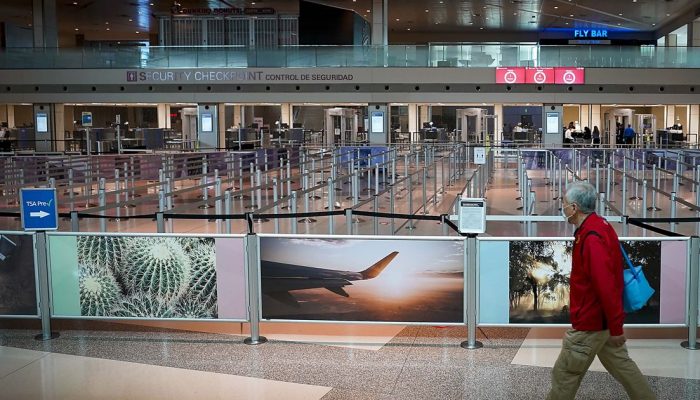 It’s rare during recent weeks to see more than three or four people waiting in TSA screening lines at DFW International Airport, even with half of the stations shut down.

Most stores and restaurants are closed and passengers are distantly spaced in seats around gates.

DFW Airport CEO Sean Donohue hasn’t seen anything like it since the days following the Sept. 11, 2001, terrorist attacks — which transformed the air travel industry from a leisurely experience into a national security operation.

Amid social distancing and the threat of COVID-19, North Texas’ major commercial airports, DFW and Dallas Love Field, are trying to find a way to get passengers back into airports and feeling good about traveling again once the pandemic subsides.

At DFW, Donohue said changes at airports could be similar to those instituted after 2001, although it’s still unclear how it will all come about.

“We are looking at making as many things as we can touchless,” said Donohue, who was an operations executive at United Airlines during the 2001 attacks. “It’s going to be as simple as touchless soap dispensers in bathrooms. But a lot of the technology things we have been looking at for the past few years are going to go from theory to necessity.”

Only 90,000 passengers traveled from U.S. airports Wednesday, according to the TSA, a 96% drop from a year ago.

“Who is going to want to sit in a middle seat right now?” asked Bryan Del Monte, an airline industry analyst with The Aviation Agency in Minnesota.

The government’s $50 billion in grants and loans may not be enough to get all carriers through the year and into the next without bankruptcies, he said. And even then, there will be far fewer flights and fewer destinations until the economy fully recovers and COVID-19 is completely gone.

“It means there will be permanent capacity reductions,” he said.

DFW and Dallas Love Field combined are receiving more than $350 million in federal stimulus money through the Congressional aid package passed last month. The money is supposed to go to pay for employee salaries and debt for projects that airports won’t have the operating funds to pay for.

Leaders at both airports say they had plenty of operating money even without the stimulus grants because passenger and concession growth has been strong for more than a decade. DFW has more than 500 days of operating cash on hand, Donohue said. Dallas Love Field, which is owned by the city of Dallas, has about 250 days worth of cash.

Both airports are trying desperately to weather the upcoming dip in passengers without massive layoffs or tenant vacancies. DFW said it won’t lay off any of its 2,100 employees. Dallas Love Field hasn’t had any layoffs either, but has reduced contracts and let go of temporary workers.

Dallas Love Field is trying to cut about $20 million out of its $158 million annual budget, said Mark Duebner, Love Field’s director of aviation. Like DFW, Love Field has eliminated rent guarantees for tenants and the airport is allowing them to pay just a percent of sales in the coming months.

“We are all grappling with expenses because we assume the revenue losses will carry at least six months,” Duebner said.

Long-term plans for the airports could change, too. American Airlines said Thursday that it would seek to reduce seasonal service to a handful of locations, including summer routes to Anchorage, Alaska; Kallispell, Mont., and Hawaii until it ends its quarantine for out-of-state travelers.

DFW had been a beneficiary of much of American’s growth as it pushed to more than 900 flights a day in 2019. It will clearly be far lower for the remainder of 2020.

There will likely be a big push in technology and cleaning in the coming months and years to make people comfortable with flying and being in crowded airports like DFW, Donohue said. Facial recognition for baggage checks, security lines and boarding could also come faster as a way to eliminate human-to-human contact.

The upcoming Terminal F, a $3.5 billion project, could be delayed a few months or several years, Donohue said.

There will eventually be a need for a new terminal “but it might be more like 7 or 12 years,” and it could open in phases to give airlines, particularly American, more time to grow, he said.

“We have been looking at a lot of scenarios for how long it will take for people to come back and fly again,” Donohue said.