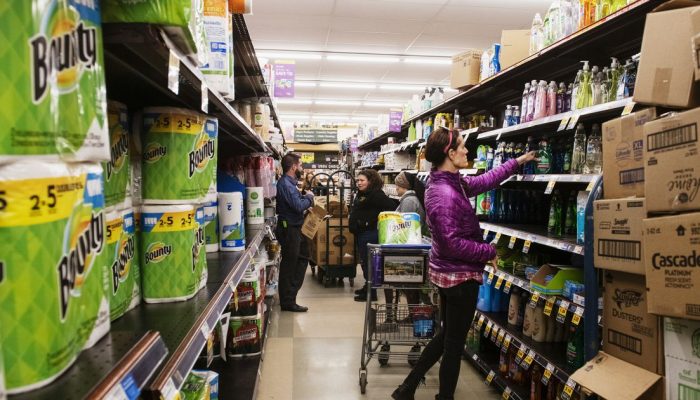 To combat the novel coronavirus, the county’s top public health officials have recommended a number of disease prevention measures, among them, frequently disinfecting high-touch surfaces in the home.

The recommendation has spurred shortages of household cleaning products in stores across the country, but health officials say the increased use of disinfectants, bleach and hand sanitizer has also had another consequence — a jump in the number of chemical exposures and poisonings.

In a report published Friday by the U.S. Centers for Disease Control and Prevention that analyzed calls to poison control centers, the agency found that during the first three months of this year, poison control centers nationwide received more than 45,500 calls about cleaners and disinfectants, about 20% more than the same period of 2019.

Calls about bleaches rose 62%, while calls about nonalcoholic disinfectants and hand sanitizers surged just under 37%, according to the report.

“Although a causal association cannot be demonstrated, the timing of these reported exposures corresponded to increased media coverage of the COVID-19 pandemic, reports of consumer shortages of cleaning and disinfection products, and the beginning of some local and state stay-at-home orders,” the report reads.

These nationwide trends are present in North Texas, too, data from the Texas Poison Center Network shows.

The network, which advises Texans who think they may have come into contact with something toxic, received some 1,900 calls about exposure to cleaning products or disinfectants from March 1 through Friday. That’s 67% more than during the same period last year.

The network is comprised of six poison centers — in Dallas, Amarillo, El Paso, Galveston San Antonio and Temple. Twenty-six percent of callers were in Dallas County at the time of their call, according to data provided by the network.

The largest percentage increase in calls were those concerning disinfectants, which more than doubled from 132 calls to 324.

Bleach-related calls, which accounted for the largest proportion of these cases, rose 68%, and calls about hand sanitizers increased 69%.

The group also reported 12 calls about chloroquine and hydroxychloroquine, antimalarial drugs President Donald Trump has repeatedly mentioned as possible treatments for COVID-19. There were no calls about those drugs in the same time period last year.

Ingestion was the most common type of exposure to the products, followed by inhalation.

The ages of people exposed differed greatly depending upon the substance. For bleach poisonings, the majority of people whose ages were reported were 20 or older. In cases involving hand sanitizers, about 70% of the patients were 5 or younger.

The data included callers who had exposure to the substances but not those who called only to ask questions about the use of cleaning products.

“Our recommendation to the public at this time are that disinfectants and other cleaning products should NOT be inhaled, ingested, injected or used in any manner outside its labeled instructions,” Cristina Holloway, public health education manager for the North Texas Poison Center, said in an email. “There are currently no vaccines, drugs or products approved to treat or prevent COVID-19.”

Holloway added that anyone with questions about a cleaning product can call the center anytime at 1-800-222-1222.

According to the CDC, chemical exposure or poisoning can be the result of using more of a product than is directed on the label, mixing products, or using a product in a place with poor ventilation. Health experts say it’s important to follow instructions on product labels.

The Texas Poison Center Network also recommends storing products in their original containers, keeping household products locked up and out of reach, using child-resistant locks on cabinets where cleaners and medications are stored, and wearing gloves and goggles when using disinfectant products.