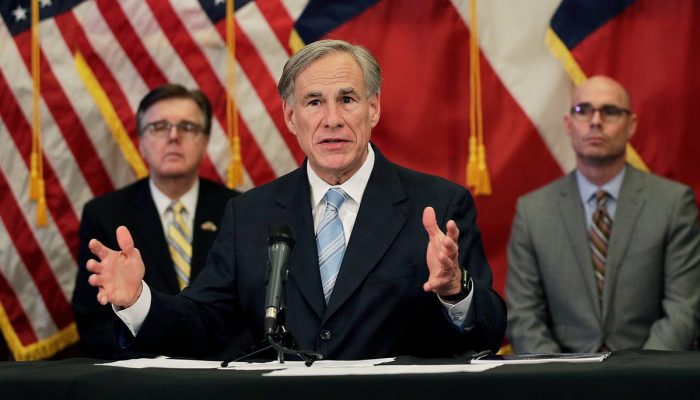 In an upbeat news conference Monday, Governor Greg Abbott announced that all Texas restaurants, retail businesses, and movie theaters will be able to partially reopen for business by this weekend if they follow his guidelines. He insisted, as he’s done for weeks, that his reopening plan is based on “doctors and data,” and not the considerable political and business pressure that has been brought to bear upon him. The time has come to lift restrictions, the governor said, because “the COVID-19 infection rate has been on the decline over the past seventeen days.”

Abbott’s sunny assessment of the state of the pandemic, however, is at odds with the state’s COVID-19 data. According to the Texas Department of State Health Services website, there was a spike in reported infections on April 10, to 1,441 new cases, the most reported to date. On April 9, there were 877 new cases and on April 11 there were 890—and the number of new infections has held relatively steady ever since. On Friday there were 862 new reported cases. If Abbott had picked for his reference point any date other than the outlier of April 10, he could not plausibly state that the “infection rate has been on the decline.”

Despite the dearth of testing in Texas—which still ranks forty-sixth among the states in COVID testing per capita—reported cases are still rising in some communities. Collin County, north of Dallas, reported 30 new cases on Friday, up from 17 on Tuesday. Tarrant County, with Fort Worth at its center, saw a swing from 101 new cases reported on Wednesday to 150 on Thursday. The county health department lists the risk of community spread as “substantial.”

The reopening plan also deviates considerably from what many public health officials say is needed for Texans to safely return to working in offices, shopping, and eating out. “The last thing we want is to waste all the great foresight and decisions we’ve made by ignoring the data and prematurely reopening wide,” William McKeon, president of the Texas Medical Center, told the Houston Chronicle. “It would be terrible for the community to respond so well, averting what happened in New York, and then find ourselves in a situation where we’re in our surge capacity and not able to offer citizens a bed, ventilator, and care they deserve.”

“As soon as we lift restrictions, whatever that strategy is, if it’s gradual or tiered or certain sectors of the economy or population are released first, we can certainly expect to see a spike in cases,” Rebecca Fischer, infectious disease epidemiologist at Texas A&M University School of Public Health, told the Texas Tribune. “What we want to make sure is that we’re far enough into the tail end of the epidemic that that bump will be minor and it won’t wind up shutting down the economy again.”

These experts, however, are not Abbott’s experts. His team of advisers includes a former state representative, Dr. John Zerwas, an anesthesiologist; Dr. John Hellerstedt, a pediatrician who has been an executive in the state health agency since 2000; and Mark McClellan, who served President George W. Bush as the Food and Drug Administration commissioner.

An Austin native, McClellan is a medical doctor, but is better known as a health policy and economics expert. He is a professor of business, medicine, and health policy at Duke University. He also is the son of former Republican state comptroller Carole Keeton Strayhorn. McClellan and some of his fellow researchers have been—to say the least—influential in guiding U.S. COVID-19 policy through two white papers. But even by McClellan’s standards, at least as they stood in these documents, Abbott is acting prematurely.

The first paper McClellan coauthored was published on March 19 and warned against taking the possibility of future infection spikes lightly. “With the isolation and other steps we are taking now, it’s possible that the epidemic spread of coronavirus will wane in the coming weeks and months. But it’s also possible that there will be additional waves of viral spread with the risk of another epidemic in the future.”

In the second paper, published by the American Enterprise Institute on March 28, McClellan and four coauthors outlined steps to reopening the economy. They outlined four prerequisites to moving beyond stringent social distancing. One that Texas apparently has met is having the hospital capacity to avoid “crisis standards of care.”

But there are serious questions about whether Texas has achieved the other three standards: the ability to test “all people” with COVID-19 symptoms; active monitoring of confirmed cases and their contacts; and “a sustained reduction in cases for at least 14 days.”

The White House’s guideline to lifting restrictions, Opening America Up Again, relied heavily on McClellan’s four standards. For example, the White House advised that economies shouldn’t be reopened until there was “a downward trajectory of documented cases within a 14-day period.” Fourteen days is important because it is believed the virus can incubate for two weeks before making someone ill, and asymptomatic individuals may transmit the virus. Think about this: anyone who gets sick now was infected after the shelter-at-home orders took effect at the end of March. (Neither Abbott’s office nor McClellan responded to a request for comment.)

Abbott said that businesses could open up even further as soon as May 18. If there isn’t an uptick in COVID-19 cases, the governor said he plans to allow most restaurants to move from 25 percent capacity to 50 percent capacity, and that he would then also allow barbershops, hair salons, gyms, and bars to open their doors to customers. At the same time, he also said we should expect an upswing in the number of confirmed cases because there will be increased testing of people to determine whether they have COVID-19.

May 18 is just around the corner. At a news conference Monday, the CEO of the Texas Restaurant Association noted that Mother’s Day (May 10 this year) is a big day for families to eat out. That’s just eight days before the phase two reopening, and COVID-19 symptoms take as long as fourteen days to manifest. If there’s a Mother’s Day outbreak, we may not know until well after May 18.

Even before Abbott’s announcement, you could sense isolation fatigue setting in—and not just from the relatively small recent protests at the state Capitol. People lined up for more than two hours to catch the ferry to the Bolivar Peninsula near Galveston. Zilker Park in Austin was filled with sun worshipers and dogs chasing tennis balls. It’s always difficult to keep a populace corralled for long periods to defend against an invisible foe. It was difficult during the so-called Spanish flu of 1918-1920. And isolation fatigue was one reason that deadly pandemic saw multiple waves of declining cases followed by new outbreaks.

The danger today is that restlessness and the pressures of keeping an economy shuttered are feeding a degree of magical thinking. During a round of radio interviews last week, Abbott said that a cure for COVID-19 will be available by the time the new school year begins in the fall. “Once we have an immunization we will be fully back to normal, but an immunization will not be in existence when the next school year begins,” Abbott told WBAP radio. “There will however be medicines you can take that will basically cure people who have COVID-19.” Abbott did not state or cite any evidence for this prediction, which is not supported by any of the leading experts on the virus.

At one point during his Monday news conference, Abbott stated: “It’s hard to get rid of this virus because it is so contagious. So we’re not just going to open up and hope for the best.”  We can only hope that he’s right.

About the Author: R.G. Ratcliffe