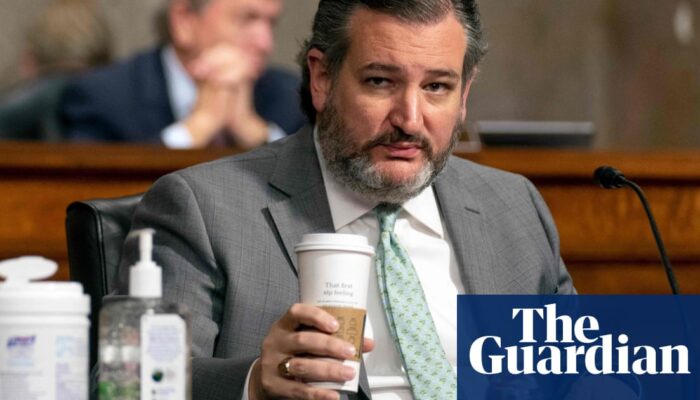 The main lesson from the scandal over his flight to Cancún while Texas froze, Senator Ted Cruz said on Tuesday, is that people should not be “assholes”, and should treat each other with respect.

The Texas Republican, who ran for the presidential nomination in 2016, is known for his caustic and brutal attacks on Democrats and willingness to buck even the appearance of bipartisan cooperation in the Senate in order to achieve his own goals, even by causing a government shutdown.

He was speaking, without discernible irony, today on Ruthless, a podcast which offers “next-generation conservative talk”.

The subject at hand was Cruz’s decision to take his family to warmer climes while his state shivered, and the decision thereafter of an unknown friend to leak the senator’s wife’s text messages to the press.

Cruz landed in political hot water while at least 30 Texans died in the cold. Temperatures have now risen but water supplies are still affected by power outages which hit millions because the state energy grid was not prepared for the freeze. Many Texans also face exorbitant bills as power companies seek to profit from the disaster.

Cruz has condemned such corporate behaviour, but on the podcast he defended Texan energy independence, insisting it was a good thing “the feds don’t get to regulate us so well” and saying it kept energy prices down.

He did not go as far as other Texas Republicans to blame the Green New Deal, a package of progressive policy priorities which are not yet law. But while noting that Texas “produces a lot more wind than California does”, Cruz insisted “the wind turbines froze, that was a big problem, the snow and ice on the solar panels dramatically reduced the ability of solar panels to generate electricity”.

Most experts say renewable energy sources were not a major factor in the Texas blackouts.

“There were also problems with both coal and natural gas production,” Cruz conceded, “and so those drops significantly as well and it was kind of a perfect storm of all of those together”.

Cruz’s most passionate complaint was about how the press treated him and his family in an affair in which he first blamed his young daughters for wanting to go to Cancún, then flew home solo and admitted his mistake.

“Here’s a suggestion,” he said. “Just don’t be assholes. Just, you know, treat each other as human beings, have to some degree some modicum of respect.”

‘It was obviously a mistake’: Ted Cruz on decision to fly to Mexico as Texas freezes – video

He said his wife Heidi was “pretty pissed” that her messages were leaked, and had been “sort of walking through” the issue with neighbours, attempting to work out who might be responsible.

He also complained about coverage of his dog, Snowflake, a poodle pictured seemingly alone at his Houston home while the family was in Mexico. Cruz said Snowflake had been “home with a dog sitter and actually the heat and power was back on”.

Cruz reserved special ire for pictures of his wife on the beach in Mexico that were published by the US press.

“The New York Post ran all these pictures of Heidi and her bikini,” he said. “I will tell you that she is pissed.”

About the Author: the Guardian