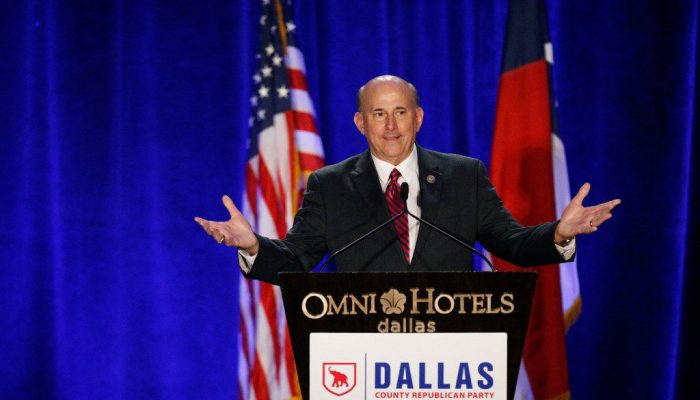 WASHINGTON — Rep. Louie Gohmert, the Tyler Republican with a history of making dubious claims, is again facing criticism after he said that German hospitals are using a disinfectant powder in mist form that kills the novel coronavirus on surfaces for up to 14 days.

“It’s being used in Germany as a mist,” Gohmert said during a live interview with local television station KLTV. “Health care workers go through a misting tent going into the hospital and it kills the coronavirus completely dead, not only right then, but any time in the next 14 days that the virus touches anything that’s been sprayed, it’s killed.”

The quote was given a “pants on fire” rating from PolitiFact Texas, and Gohmert’s general election opponent is campaigning off the comment, calling it “fairy tale lies” in an email to supporters.

“For him to come out as an elected official, as a leader of a large portion of East Texas and say such an idiotic, unproven thing to people who are scared and looking for answers was just beyond the pale,” said Democrat Hank Gilbert, a Tyler businessman and rancher who is hoping to unseat Gohmert in November.

Gohmert brought up the powder, which he said is manufactured by an Arizona company, after he was asked about hydroxychloroquine, an anti-malaria drug that President Donald Trump has promoted in the treatment of COVID-19, but that experts warn is not yet proven safe or effective for the virus.

Gohmert, a Trump ally, urged the Food and Drug Administration to approve use of the drug for treating patients with COVID-19 before bringing up the powder as an example of another tool that could be used to combat the coronavirus in the U.S.

While arguing for the use of hydroxychloroquine during the interview, Gohmert also said “it’s not been known to have side effects,” which is false.

The FDA says the drug is not safe for people who have abnormalities in their heart rhythms, eye problems involving the retina, or liver or kidney disease. It can also cause nausea, diarrhea, mood changes and skin rashes.

On Friday, Gohmert spokeswoman Kimberly Willingham defended his comments by attacking the credibility of PolitiFact, but she did not elaborate on what powder Gohmert was talking about.

“In our experience, PolitiFact has not been honorable nor accurate,” she said in a statement. “At an appropriate time of our choosing, not that of a political hack website, specifics will be revealed and Congressman Gohmert will, once again, be shown to be accurate.”

Gohmert has a history of unsubstantiated and sometimes eye-popping claims.

In 2010, he sparred on CNN with anchor Anderson Cooper after claiming that the United States faced an “explosion” of “terror babies” — children born in the U.S. and raised to commit acts of terror, using their American citizenship to slip through any dragnets the government might construct. He called it a “gaping hole in the security of our country.”

In 2015, Gohmert challenged House GOP leader John Boehner for the speakership. Critics dusted off that and other greatest hits. American Bridge 21st Century, a Democratic opposition research group, uploaded a video with some of his claims.

This past December, Gohmert publicly named a person that some Republicans and allies of President Donald Trump claim is the alleged whistleblower who first brought the Trump-Ukraine scandal to light, despite whistleblower protection statutes that protect the identity of those who call attention to wrongdoing in the federal government.