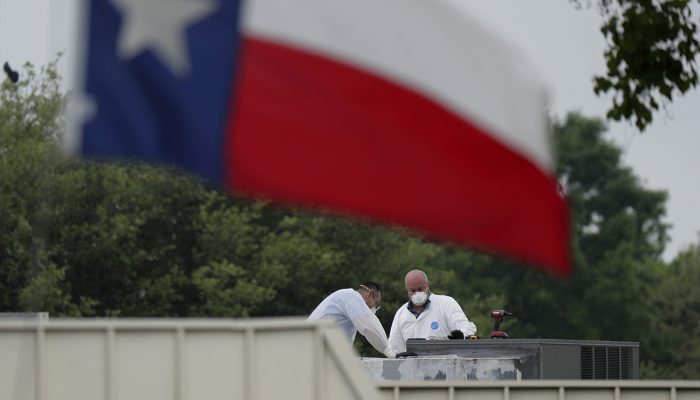 Davis countered that Roy’s approach to the pandemic would endanger public health and further damage the economy. Roy, she said in an interview, should spend less time on radio shows comparing mayors and judges to “dictators,” and “more time working to make sure Texans are getting the critical medical and economic support they need.”

Other early flaps have involved statewide leaders who aren’t even on the ballot this fall. Abbott in particular has taken heat from Democrats and in the press for moving too slowly to stamp out the spread of the virus — positions his critics contend were meant to accommodate businesses in rural counties that form his voting base, but also where the virus hasn’t increased as rapidly.

“We were leaning blue after O’Rourke ran. But people felt like that was the high-water mark,” Chad Cantella, a lobbyist in Texas who is not registered with a political party, said of the uncertainty over the virus’ spread and who voters will blame over its impact. “This could have the same effect. It could really charge up the Democratic base to get over the hump.”

Without a statewide candidate to coalesce around — Democrats have yet to settle on a Senate nominee to challenge Republican John Cornyn — they are using Trump as a national foil. Meanwhile, a new crop of Texas Democrats who hold obscure but powerful offices are embracing their roles as counterbalances to Abbott and his handling of the crisis.

Of the total number of positive cases, 2,269 Texans are now characterized as having recovered. Ray Sullivan, who served as chief of staff to former Gov. Rick Perry, said Abbott has done an admirable job of looking out for his state’s diverse interests and was skeptical voters would back Democrats over heat-of-battle differences in their approach to the virus.

But Democrats say Abbott’s resistance to closing down the economy quickly will come back to haunt Republicans in competitive races this fall.

The governor ultimately issued what amounted to a statewide “stay at home” order, though he chafed at that description. Ancillary scuffles followed over his exemptions for religious services and including abortions in an elective procedure ban. Lt. Gov. Dan Patrick, another conservative Republican, raised eyebrows when the former talk radio host suggested that seniors like himself would put their health or even their lives at risk to help rescue the economy for future generations.