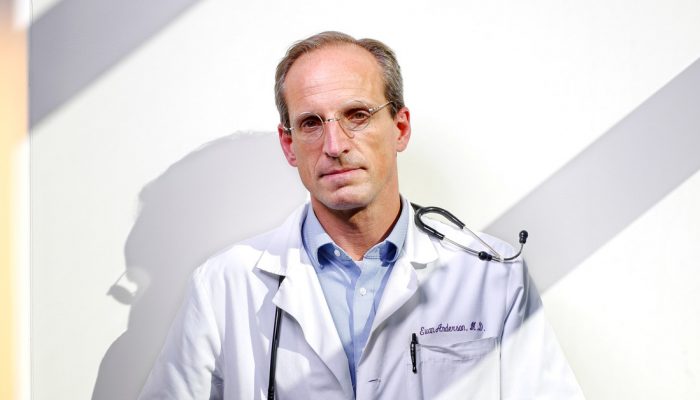 Evan Anderson, an infectious-disease doctor, heads to his post on the front lines of the COVID-19 battle just as the 7:30 a.m. bell tolls on the clock tower at Emory University, honoring the healthcare workers risking their lives in the hospital. There’s an urgency in the staccato repetition of those chimes, a reminder of the imperative facing Anderson and his colleagues.

In mid-March, Emory’s Vaccine and Treatment Evaluation Unit, under Anderson’s leadership, joined the nation’s first clinical trial for a COVID-19 vaccine. Emory is also testing drugs that could slow or halt the devastating assault of the virus in the lungs.

Normally, developing a new vaccine takes about a decade. But with the economy crippled and deaths mounting, the race is on to find an effective vaccine in little more than a year. Anderson immersed himself in that research while helping care for the sickest patients in the hospital. “It is a unique and unusual circumstance,” says Anderson. “But it helps to see firsthand the importance of this vaccine.”

On a normal spring day, Anderson would have been in his office or lab testing vaccines against other threats, such as respiratory syncytial virus, which often causes mild cold symptoms but can be deadly to very young infants and older adults. Or evaluating whether a compound added to the influenza vaccine could boost the body’s immune response. He set aside those studies as this new project emerged with an ultrafast timeline. “We had to drop a number of other things to get the study enrolling within two weeks,” he says.

The first phase of a drug trial involves just a few dozen people, but they need to be healthy and reliable. With two clinical vaccine research sites—the Emory Children’s Center Vaccine Research Clinic at the main campus, and the Hope Clinic of the Emory Vaccine Center just north of Decatur—the university has a track record of enrolling participants who stick with the protocol. (Infectious-disease doctor Nadine Rouphael, lead investigator for this trial at the Hope Clinic, is a co–principal investigator for Emory’s overall vaccine program, along with Anderson and Carlos del Rio, a global health expert at Emory.)

Sean Doyle, an MD/PhD student at Emory, opened an email from the vaccine center on Saturday afternoon, March 21. It was short and to the point. Would he be willing to be part of a COVID-19 vaccine trial? “I was 100 percent on board,” says Doyle, 31, who had received an experimental Ebola vaccine a few years before. “I didn’t even have to think about it.”

Two days later, he came for his screening, and received his first dose of the mRNA-1273 vaccine on Friday, March 27—less than a week after the initial email. Doyle was one of the first 17 Atlantans in this Phase One study, which checks for safety and signs of immune response. Another 28 people received the same vaccine at the Kaiser Permanente Washington Health Research Institute in Seattle, the lead institution for the trial. The first vaccine dose was administered there on March 16, just over two months after Chinese scientists shared the genetic sequence of the coronavirus.

Anderson met with Doyle to discuss how the vaccine works, its potential risks, and the requirements of the trial. He checked on him after a nurse injected the vaccine in his right upper arm. “It was a little bit tender for maybe a day. After that, it was like nothing had been injected there,” says Doyle. All participants receive a second dose a month after the first.

By mid-April, the vaccine trial had been safe enough to enable its expansion to a vulnerable group: older adults. Researchers added 30 people between the ages of 56 and 70 and 30 people 71 and older, split among sites at Emory, in Seattle, and at a National Institutes of Health center in Bethesda, Maryland.

The coronavirus has a crown of protein spikes, which the virus uses to gain entry to human cells. It then hijacks the human DNA to make copies of itself. The mRNA-1273 vaccine, developed by the National Institute of Allergy and Infectious Diseases and Moderna Therapeutics, a Massachusetts-based biotech company, contains a synthetic version of the virus’s messenger RNA—a strand of genetic code that instructs the body’s cells to make a section of the spike protein. “The hope is that this will prime the body’s immune system to make antibodies and maybe other infection-fighting cells, which can prevent infection of the real COVID-19,” Anderson says.

As much as Anderson wants mRNA-1273 to work, he knows most vaccine candidates don’t ultimately succeed. Two months after the first doses were given, the researchers will decide whether to advance to a Phase Two trial, which enrolls as many as a few hundred people and looks for an immune response and evidence that the vaccine spurs a protective effect. “We’re cautiously optimistic, but we’re trying to be prepared to move forward with other vaccines,” he says. There are more than 70 other candidates, including one the University of Oxford developed for other uses that might stop COVID-19 and could be available this fall.

Some patients Anderson sees are eligible for experimental treatments. About 100 Emory patients have been part of a study of remdesivir, an antiviral developed to treat Ebola. On April 29, the National Institute of Allergy and Infectious Diseases announced preliminary results of this randomized, controlled U.S. trial involving 1,063 patients that showed the drug led to quicker recovery. In response, the FDA was expected to authorize its emergency use for COVID-19. Clinical trials are also beginning on EIDD-2801, a different type of therapy developed by an innovative drug-development group at Emory.

Meanwhile, Emory doctors and nurses rely on basic medical techniques they have used in treating other infectious diseases. Their work is shaped by the intense experience of treating Americans with Ebola in 2014; all four patients recovered, and no Emory healthcare workers became ill. Infectious-disease doctor Aneesh Mehta was on call for the biocontainment unit when the first Ebola patient arrived. Inspired by the teamwork underlying the effective care, he later helped found a national consortium to assist hospitals in preparing for future outbreaks.

“We’re cautiously optimistic, but we’re trying to be prepared to move forward with other vaccines.”

Those plans unfolded this spring. The first week of March, he was doing rounds at the hospital when he received a call from the emergency department about a young patient with cough, fever, and body aches who had recently traveled to an area with a COVID-19 outbreak. The patient wasn’t terribly ill and recovered at home, but the wave was coming.

Even amid these difficult days, Mehta finds reasons for hope. “We have definitely had a lot of successes,” says Mehta, who is Emory’s lead researcher for remdesivir. “It heartens the team to get those patients back to their families. We hope to continue to do that until this outbreak is finished.”

This article appears in our June 2020 issue.

About the Author: Atlanta Magazine