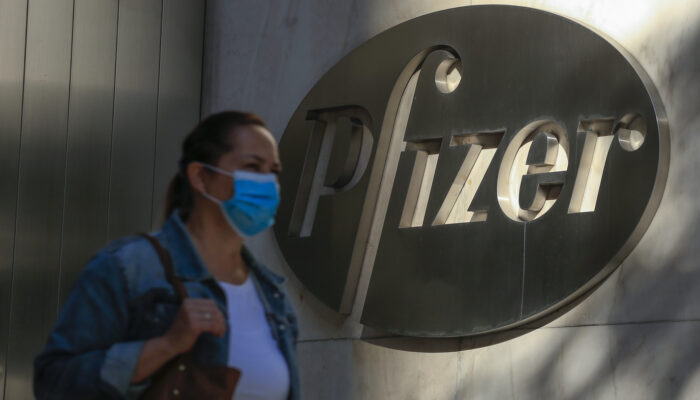 
A woman wears a mask as she walks by Pfizer’s world headquarters in New York last month.

A woman wears a mask as she walks by Pfizer’s world headquarters in New York last month.

The EU’s drug agency said Tuesday it may approve the Pfizer and BioNTech coronavirus vaccine this month. The vaccine could be distributed before 2021.

The European Medicines Agency will meet by Dec. 29 to conclude its assessment of the vaccine. If approved, the vaccine could begin to be distributed before year’s end, BioNTech said in a statement Tuesday.

“Today’s announcement marks another key milestone in our efforts to fulfill our promise to do everything we can to address this dire crisis given the critical public health need,” Pfizer CEO Albert Bourla said in the BioNTech statement. “We have known since the beginning of this journey that patients are waiting, and we stand ready to ship COVID-19 vaccine doses as soon as potential authorizations will allow us.”

Bourla told NPR’s All Things Considered last month that the companies “will be ready to start distributing our vaccine within hours.”

The U.S. is on track to make a decision about the vaccine sooner. Pfizer has already asked the Food and Drug Administration to authorize its vaccine for emergency use, and the agency could have an answer as soon as Dec. 10.

Rival drug company Moderna said Monday it has also applied for approval in the U.S. and in Europe. EU regulators will assess Moderna’s vaccine by Jan. 12.

Two weeks ago, Pfizer said its two-dose vaccine was 95% effective in clinical trials and begins to work four weeks after the initial dose. Trials showed a 94% effectiveness for those older than 65, who are at higher risk for complications from the virus.

Britain is also assessing the Pfizer and BioNTech vaccine and wants to make a decision in the “shortest time possible.” Regulators did not specify a time frame but said they would expedite the process “without compromising the thoroughness of our review.”

Drugmakers around the world are racing to supply a coronavirus vaccine, upon which governments are hinging their pandemic strategies. Globally, more than 63.5 million cases of COVID-19 and 1.4 million deaths of complications from the disease have been recorded, according to Johns Hopkins University.

European Commission President Ursula von der Leyen said Tuesday that the EU has secured around 2 billion doses of potential COVID-19 vaccine, according to The Associated Press. Deliveries to its 27 member nations will likely start before 2021.

“It will be a huge step forward toward our normal life,” von der Leyen said. “In other words, I just wanted to say there is a light at the end of the tunnel.”

Reese Oxner is an intern for NPR’s News Desk.