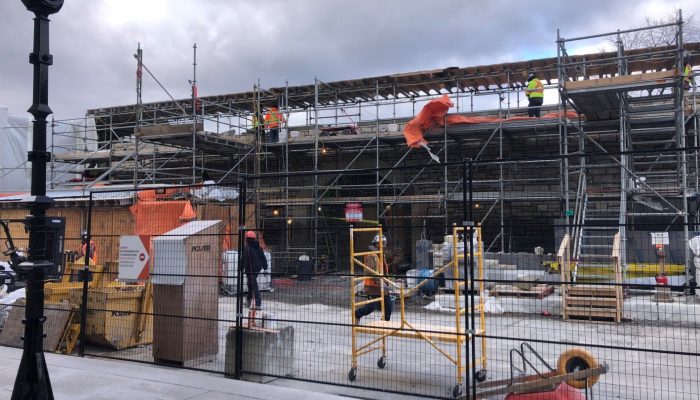 
Tonight’s Evening Brief is brought to you by iPolitics. Subscribers get all the morning news delivered to their inbox at noon Monday to Friday. Be the first to get our feature column on staff changes on the Hill every Thursday. Sign up here.

Remediation and excavation work in front of the 100-year old Centre Block building continues while Parliament is effectively shut down by COVID-19, but the federal department in charge of the massive job has temporarily demobilized 85 other projects throughout the parliamentary precinct.

Public Services and Procurement Canada came under political fire from the Conservative Party last month when two news reports highlighted that the excavation, and other separate work inside the Centre Block, was going ahead — despite an Ontario government halt on many types of construction, in conformity with physical distancing regimes to curb the spread of COVID-19.

But in an exchange of emails with iPolitics over the past week, the department emphasized that the nature of the work allows workers to avoid contravention of COVID-19 safety rules — and that hazardous work in the building involved use of the kind of protective gear that offers a defence against the potentially deadly virus.

Prime Minister Justin Trudeau on Monday said Canada is contributing over $850 million towards the global fight against COVID-19.

This funding includes support for the University of Saskatchewan’s work on vaccine development and Vancouver-based AbCellera’s efforts to develop effective treatments, he said, as well as contributions for the Coalition for Epidemic Preparedness Innovations and the World Health Organization’s solidarity trial, which helps hospitals share information on treatments.

“The more we cooperate, the more likely that we find a cure and find it quickly. And that’s something we all want to see,” he said during his daily press conference in Ottawa.

As some provinces beginning to gradually to reopen their economies, the opposition Conservatives are warning that federal emergency aid could discourage some people from going back to work.

Conservative Leader Andrew Scheer said Monday that flaws in government support programs could “derail” provincial efforts to get the country’s economy back on track after widespread business shutdowns because of COVID-19.

“At a time when our economy needs stimulus, Justin Trudeau has given it a tranquilizer and risks creating labour shortages across the country. This failure must be reversed before it is too late. Canada’s economic recovery depends on it,” he said.

The Ford government isn’t considering following the lead of British Columbia and issuing clinical guidance for providing prescription alternatives to street drugs amid the coronavirus pandemic — though Toronto Public Health is asking the province to consider such moves as overdoses spike.

Data from Toronto’s paramedics, shared with iPolitics by the city’s public health unit, showed that calls for suspected opioid overdoses in March surpassed any other month since the same time last year. Paramedics attended to 345 calls, including 19 deaths from suspected overdoses.

Victoria Gibson has the details.

Fundingportal analysis: How to plan a comprehensive grant strategy in a COVID-19 environment: Fundingportal

Researchers for the World Health Organization say that evidence suggests the novel coronavirus was passed to an “intermediate host” animal between being transferred from wild bats to humans. However, some scientists say they still may never find the disease’s natural origin. (BBC News)

A day after President Donald Trump said that COVID-19 deaths in the United States could reach 100,000, a dossier about the crisis prepared by the Federal Emergency Management Agency shows that the daily death toll for Americans because of the infection will reach 3,000 by June 1. There are currently around 1,750 people dying after contracting the coronavirus in the U.S. each day.  (New York Times)

World leaders, excluding the U.S., and organizations together pledged $8 billion to research manufacture and distribute a possible vaccine and treatments for COVID-19 on Monday. Other countries teaming with Canada include European Union nations, Britain, Norway and Saudi Arabia. (Reuters)

China’s ambassador to the EU Zhang Ming represented the country at the online event where the agreement was announced on Monday, but, like Canada, made no new financial pledges, or promised that the country would make a successful vaccine a public good. Zhang also asked the world to stop blaming China for the spread of the disease. (South China Morning Post)

J. Crew filed for bankruptcy protection on Monday, becoming the first mass-market clothing retailer to collapse during the pandemic. The company will hand over control to its top creditors by converting $1.65 billion of its debt into equity. It still plans to reopen the hundreds of stores of its brand and its subsidiaries when pandemic restrictions become permitting. (Wall Street Journal)

Ask not what your country can do for you…

Days after Belgium and Canada asked their residents to each french fries to help support potato farmers, France has asked its citizens to increase the amount of cheese they eat as an act of patriotism. (News 18)

Have a nice night.