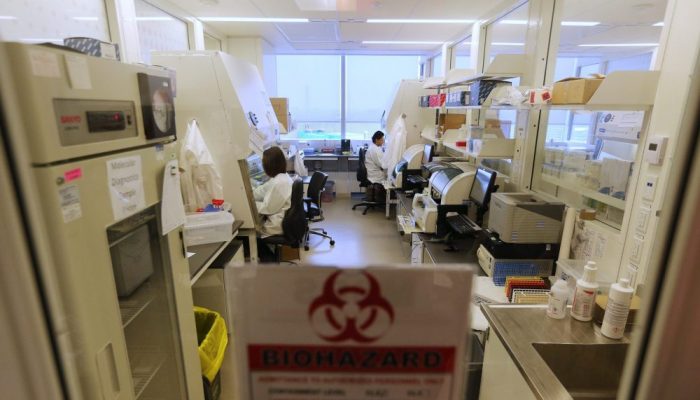 
Tonight’s Evening Brief is brought to you by iPoliticsIntel. Daily Watch INTEL Briefs are a concise snapshot of the day’s committee meetings in the House and Senate – delivered to your inbox each morning. Learn more here.

As the global race towards a COVID-19 vaccine charges on, some working in the vaccine field predict that history could repeat itself.

“This is going to happen all over the world,” Brian Ward, the medical officer for Quebec City-based vaccine manufacturer Medicago, said while discussing the late 1970s American clampdown on flu shots.

“Vaccines manufactured in Country X are going to stay in Country X until the population needs in that country are satisfied, and then sent elsewhere.”

Prime Minister Justin Trudeau dedicated $252 million in federal aid for the agri-food industry on Tuesday, in order to help struggling producers and sustain the country’s food system during the COVID-19 pandemic.

“With this funding, we’re giving extra help to beef and pork producers so that they can adapt to this crisis. This is an initial investment and if we need to add more we will,” Trudeau said at his daily press conference.

Just less than one-third of the support funding, $77.5 million, will be given to food processors. The millions can be spent by companies on personal protective equipment for workers, upgrading  their facilities to better promote current public health recommendations or expanding their processing capacities, Trudeau said.

Ahead of Tuesday morning’s announcement, farm groups said producers are “very close” to euthanizing livestock as hundreds of thousands of animals are in a processing backlog thanks to the COVID-19 pandemic.

At last night’s teleconference of the House Industry committee, Keith Currie, first vice-president of the Canadian Federation of Agriculture, said farmers are growing increasingly frustrated as they’re told to look for support from existing Business Risk Management programs that farm organizations have identified for years as inadequate and in need of reform.

Rachel Emmanuel has this story.

The Heart and Stroke Foundation of Canada was the active outfit on the federal lobbying circuit in March, recording 62 communication reports with the Office of the Commissioner of Lobbying for that month.

A spokesperson for the Heart and Stroke Foundation told iPolitics that the group had two lobby days on March 10-11, and representatives held 70 meetings where they spoke to officials about “protecting youth from vaping and implementing universal pharmacare.”

The Drilldown: Enbridge Inc. offers 900,000 barrels worth of storage as oil glut grows

Most Canadians comfortable with pace of easing restrictions: poll (The Canadian Press)

Scientists have identified a new strain of the coronavirus that has become dominant worldwide and appears to be more contagious than the versions that spread in the early days of the COVID-19 pandemic. The new strain appeared in February in Europe, migrated quickly to the East Coast of the U.S. and has been the dominant strain across the world since mid-March. The mutation identified in the new report affects the now infamous spikes on the exterior of the coronavirus, which allow it to enter human respiratory cells. (The Los Angeles Times)

The European Union has called for a worldwide investigation into the origins and spread of COVID-19 in a move its foreign policy chief described as “standing aside from the battlefield between China and the U.S.” In addition to calls for an independent investigation, nations such as the U.S. are also pushing to reinstate Taiwan – which Beijing views as a renegade province – as an observer to the World Health Assembly. (South China Morning Post)

Trump administration officials are telling members and staff of the coronavirus task force that the White House plans to wind down the operation in coming weeks despite growing evidence that the crisis is raging on. A top advisor to Vice President Mike Pence who has helped oversee the task force, Olivia Troye, has told senior officials involved in the task force to expect the group to wind down within weeks, a notice echoed by other top White House officials. While the task force’s advice has sometimes been swept aside by Trump and its recommendations for criteria on reopening for business defied by a number of states, it has served as the White House’s centralized response to the pandemic. (The New York Times)

Rwanda, one of the first countries to impose strict lockdown measures in Africa on March 22, when it had only 19 cases, has partially lifted its virus lockdown, allowing people to move freely during the day after more than six weeks being confined. Beginning yesterday, citizens were allowed to move freely from 5 a.m. to 8 p.m., businesses, manufacturing and construction operations will be allowed to resume with essential workers, while markets will be allowed to open with no more than 50 per cent of traders operating. To date, the East African country has recorded 225 cases and zero deaths. (Africanews)

A dramatic deterioration in U.S.-China relations in recent days has convinced current and former government advisors on both sides that bilateral ties have plummeted to their lowest point in decades. Analysts say the gloves are now off, with any residual optimism from the  phase one trade deal signed in mid-January gone, along with all hope that trade ties could help salvage the wider U.S.-China relationship. (South China Morning Post)

If you need to brighten your mood this Tuesday evening, check out this beautiful rendition of Farewell to Nova Scotia.

In times like these, music helps. My buddy and fellow Nova Scotian @stphnmaher wanted to contribute to the Nova Scotian Kitchen Party, so here is our take on a classic. Much love to everyone back home. #NovaScotiaStrong pic.twitter.com/hnxaM2Flwf

Have a great night.