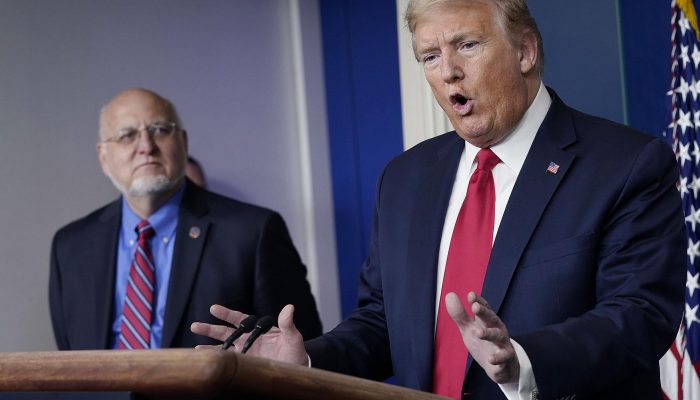 WASHINGTON — With the coronavirus pandemic already slowing immigration from abroad, President Donald Trump’s newly issued immigration order isn’t quite the “shutdown” he claimed it to be — at least not immediately.

The order, which has exceptions for medical professionals and farmworkers and only applies to those not already in the country, halts employment-based visas and restricts immigration within families, barring parents and siblings — a big swing at the so-called “chain migration” the president has campaigned against.

The longer it stays in place, the more significant it will be, especially for Texas, home to nearly 10 percent of all new green card holders, and Houston, where a quarter of the population is foreign born and where immigrants are a key driver in the economy. And it’s causing chaos and panic for many.

“Every university, every sports team, every chemical plant, every employer seeking to qualify a key employee — it could be the No. 1 graduate of Harvard in his class in nuclear science — that person will be barred indefinitely from the United States,” Foster said. “The real impact is long term — how long will this last, and it’s an open-ended question.”

Trump has said he’ll revisit the order in 60 days, and for now immigration attorneys in Texas are telling their clients to carry on with business as usual.

But with immigration as a central plank in Trump’s reelection push this year, they’re worried the order will last much longer than that, following the pattern his administration set with the Muslim ban it put in place for 90 days in January 2017 that still stands years later.

“If the courts uphold it,” as they did the Muslim ban, “then what’s to stop him from extending it?” said Nancy Falgout, another Houston immigration attorney.

Falgout said she has several clients she’s worried could get caught up in it immediately. The pandemic had already slowed immigration work significantly. Falgout said she’s concerned some consulates will just stop processing applications all together now.

“Everyone’s panicked,” she said. “They’re already barely processing anything, and I can just see this making them shut down.”

A different sort of family separation

Falgout gave three examples of clients affected by the order.

One client, who has lived in the U.S. for years and runs his own carpentry business in Pasadena, is in Mexico, where he went in mid-March to interview for his green card after a years-long process. Weeks later, he still hasn’t received his visa and is stuck in Mexico with his wife, who is a permanent legal resident of the U.S., and kids, who are U.S. citizens.

They went with him in March and didn’t want to come back without him.

“Now he’s stuck for at least 60 days more,” Falgout said. “I’m sure his business is falling apart while he’s gone.”

Another client lives in the U.S., but has three children in El Salvador he’s trying to get here, as well. The oldest will turn 21 in June and age out of provisions allowing him to immigrate as a child. His two younger siblings already have their visas, and now their older brother will not be able to come with them.

“The father is very sad but he says it’s in God’s hands and he knows God is going to help us out of this,” Falgout said.

Another client, a permanent U.S. resident, has been stuck in Haiti since anti-government demonstrations erupted there last year. He was robbed and his passport was stolen. It took months to get a new one. By the time it came he had to apply for a new visa — which required a slew of other documents, including a birth certificate. He finally had all his paperwork in line earlier this week.

“We told him, OK, he can submit them now, but we don’t know if they’ll issue the visa because of this,” Falgout said.

CORONAVIRUS LATEST: Keep up with the latest COVID-19 news

Trump has cast the order as “pausing immigration” to “put unemployed Americans first in line for jobs as America reopens.”

“It would be wrong and unjust for Americans laid off by the virus to be replaced with new immigrant labor flown in from abroad,” the president said in a statement accompanying the order.

But immigration advocates say there is ample evidence that immigrants actually create jobs and aren’t taking them from Americans.

Immigrants are 31% of Houston’s work force

In Houston, immigrants are responsible for more than 26 percent of the area’s GDP, according to a study by New American Economy, and they have accounted for a third of the region’s population growth over the last decade.

The National Academies of Sciences, Engineering, and Medicine, meanwhile, found little evidence that immigration significantly affects the overall employment levels of native-born workers nationally. Another study found immigrants started more than half of American startups valued at $1 billion dollars or more and immigrant founders created an average of approximately 760 jobs per company in the United States.

And data shows that unemployment actually tends to be lower when immigration levels are at their highest.

But with unemployment at record levels because of the pandemic, the argument is harder to make, said Bill Hing, general counsel of the Immigrant Legal Resource Center and a law professor at the University of San Francisco.

“The test is going to be how reasonable this is,” Hing said of Trump’s order. “At some point it becomes unreasonable.”